Lifting Huntington’s families’ spirits with the promise of clinical trials

Perhaps nothing lifts the spirits of struggling Huntington’s disease families more than news about research breakthroughs.

With people emitting oohs and ahs about some of the key developments, you could feel the excitement in the room Monday evening, September 24, as Jody Corey-Bloom, M.D., Ph.D., presented her annual research update to the support group of the San Diego Chapter of the Huntington’s Disease Society of America (HDSA).

The director of the HDSA Center of Excellence for Family Services and Research at the University of California, San Diego (UC San Diego), Dr. Corey-Bloom kicked off the update with the hottest topic in the HD research world: gene silencing techniques aimed at attacking the disease at its roots.

“This is a big thing,” Dr. Corey-Bloom stated. “There are actually two methods to accomplish this that are under way in research labs around the world…. We want to switch off the gene that is responsible for Huntington’s disease. A lot of people feel very good about these techniques.”

“If we can get rid of this harmful protein, there’s a good chance that we could slow down the disease or even prevent it,” Dr. Corey-Bloom explained. 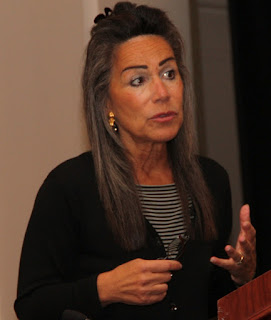 “It’s likely that we’ll see both approaches being tried,” Dr. Corey-Bloom said, noting, that, given the current state of the science, it appears that the ASO approach will enter a trial first.

Dr. Donald Cleveland of UCSD and Isis Pharmaceuticals, Inc., of Carlsbad, CA are nearly “ready to go” with a clinical trial, perhaps as soon as within 12 months, she observed.

“The critical thing to say here is that we really are edging closer to human trials,” Dr. Corey-Bloom emphasized.

The trial site has not yet been determined.

In the coming weeks, I will report in detail on the UC San Diego/Isis project, which is mainly underwritten by the CHDI Foundation, Inc., the multi-million-dollar, non-profit biomedical research foundation dedicated exclusively to accelerating Huntington’s drug discovery and development.

You can watch Dr. Corey-Bloom’s presentation in the video below.


The shock of HD’s reality

Having tested positive for HD in 1999 and watched my mother succumb to the disease in 2006, I was thrilled to hear the news about the Isis ASO trial.

I have tracked the progress of the project since early 2008, shortly after the start of the CHDI-Isis collaboration (click here to read more).

Isis had first estimated that a clinical trial could start in late 2010. As with many scientific endeavors, delays have occurred. Now that a trial could realistically begin next year, I can once again fantasize about living free of this scourge that robbed my beloved mother of her ability to walk, talk, eat, and care for herself, leaving her a mere shadow of herself.

The support group meeting proved especially poignant for me because I had not attended for a number of months. After a summer break from my usual intense focus on HD, I once again confronted the reality of my own future in the faces of the HD-affected individuals I saw at the meeting.

Seeing these disabled individuals shocked me into renewing the fight to save them – and myself.

At 52, I am now at mother’s age of onset. Once again, I felt extremely lucky to have avoided the noticeable, classic symptoms of HD.

I have attended Dr. Corey-Bloom’s updates for about ten years. Each time, she manages to provide clearer and more comprehensive information.

Squeezing literally dozens of research developments into an hour-long talk and making it understandable for a general audience is no small challenge. As I told her afterwards, “You just get better every year!”

This year’s update especially served like a salve to calm my worries, which had heightened considerably after hugging one HD-affected friend who seemed to have declined since I last saw her a few months ago.

As Dr. Corey-Bloom spoke, I imagined this HD sister becoming healthy again and happily growing old with her family.
Posted by Gene Veritas at 9:52 AM 1 comment:

Fifteen-year-old San Diegan Terry Leach wants to destroy Huntington’s disease, the condition that has devastated him since his toddler years and threatens to take his life very soon.

Terry’s story deeply moved San Diego artist Lee Ellingson to imagine a different outcome. In Lee’s Superman-like comic-book-style rendition (below), Terry has overcome HD by becoming “SuperTerry.” SuperTerry knocks out Huntington’s and saves the world from the ravages of the deadly disease that afflicts an estimated 30,000 Americans and could devastate as many as 250,000 more Americans who live at risk. 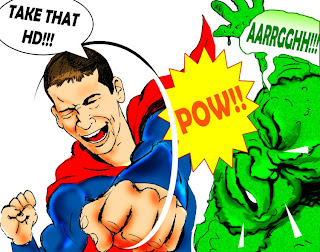 SuperTerry is vigorous, powerful, and triumphant. He beams with the joy of restored health and newfound happiness that the real-life Terry – along with every other victim of HD and juvenile HD – hopes for as scientists seek effective treatments and a cure.

“Wouldn’t it be great if this Huntington’s disease was like some kind of monster and Terry had super powers and could defeat the monster?” Lee told me in an interview. “That was my idea. It just kills me that a kid like Terry can have a disease like this at such a young age.”

Lee recently learned of Terry because of his own son Arnold’s struggle to live. Terry and Arnold attend the same after-school care program for disabled children and teens.

Arnold, who turns 13 later this month, was born hydrocephalic, a condition once known as “water on the brain.” He had an emergency operation immediately after birth to insert a shunt that drains fluid from the brain. He has had 23 more operations to adjust the shunt. Arnold also has autism and cerebral palsy.

Although Lee has made drawings for Arnold, SuperTerry is his very first piece illustrating a disease. He was shocked to learn that HD can affect children.

“He’s aware of what’s going on, but his body doesn’t do what it should be doing,” Lee, whose work includes background layout for the 1990s TV series Attack of the Killer Tomatoes and pieces for the San Diego Museum of Natural History, said of Terry. “That’s what’s especially heartbreaking for me. He’s a normal 15-year-old kid inside.”

Lee imagined the monster by thinking of the horrors of HD.

“He’s kind of like a blob,” Lee said. “He’s transparent and green. Slimy! I just wanted him to look real mean.

“I’ve always been pretty religious, but seeing all these kids really tests your faith,” Lee continued. “Kids like Terry and Arnold are the closest things on earth to an angel. Terry will never steal or cheat or rob or hurt anyone.”

Lee made the illustration based on photographs. On August 2 the two met in person for the first time at a fundraising event for the San Diego Chapter of the Huntington’s Disease Society of America (HDSA-San Diego). Lee presented Terry with the illustration.

“Terry was very appreciative of the picture,” his mother Angela told me. “He liked it a lot.” 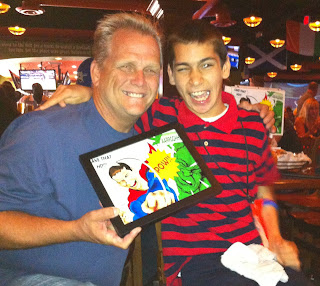 HD patients constantly struggle to maintain weight because they burn large amounts of calories and suffer from severely hampered swallowing. In 2010, in an end-of-life measure, the real Terry started taking meals and water through a feeding tube connected several times each day to a surgically produced hole in his abdomen. Before the operation, he weighed only 67 pounds. He now weighs 100, enough to help extend his life but still way below the average of 126 pounds for a 15-year-old male.

Terry’s body reacts to the hole as if it were an ulcer, causing him to produce large amounts of saliva that he wipes away with a towel constantly at hand. Doctors will inject botox into his salivary glands to diminish their output. He’s also gotten botox in his arms and legs to relieve pain.

Terry has undergone leg and foot operations to further relieve pain and tightness, correct deformities, and allow him, with assistance, to occasionally leave his wheelchair and walk. (For further background on Terry, please click here and here.) 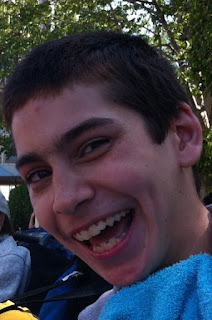 Because he can’t talk, Terry partially communicates through a language program on his iPad, which allows him to interact with people as the device’s speaker pronounces words and phrases that he selects. He takes regular classes at Madison High School, where he is starting tenth grade. Last fall he made the honor roll by carrying a grade-point average of at least 3.5. In middle school he received a number of other awards.

Terry loves computer games. During my visit to the Leach household, he played Club Penguin while I spoke to his mother for 90 minutes.

“He’s always happy,” said Angela, a single parent who depends on Medi-Cal and other programs for financial assistance and, when she misses work because of Terry’s medical appointments and crises, the generosity of her employer, the San Diego Convention and Visitors Bureau. “He’s always wanting to give me a hug. And he’s so strong. He deals with everything and never quits fighting. He never complains, either. He’s always wanting to help. Everybody that knows Terry sees the light within him.”

However, Angela knows that, unless treatments become available very soon, Terry will die of HD. Recently a cousin of Terry’s with juvenile HD died at the age of 23. Other juvenile HD patients die in their teens or even childhood. 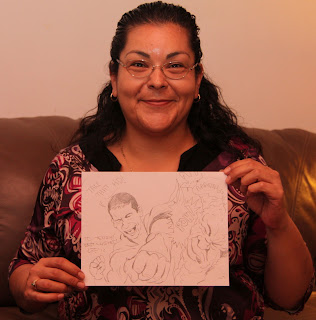 Knowing how little time remains for Terry, both Angela and Lee want to use SuperTerry to raise funds for HD research and increase awareness about HD and the difficult issues surrounding it.

Lee plans to expand SuperTerry into a comic strip and perhaps even a graphic novel about HD. Angela hopes to sell SuperTerry t-shirts in collaboration with HDSA.

“I don’t want any fame or glory,” Lee said. “I just want to help raise money. I want Terry to be the star.” As research progresses, science will also find ways to cure other diseases, too, he added. Such research could also benefit Arnold. 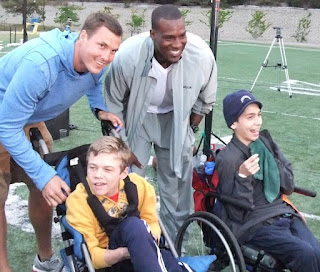 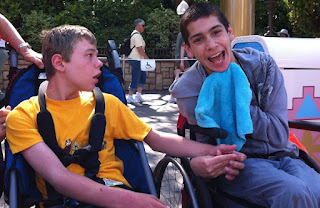 Angela hopes that her and Lee’s efforts will help inform HD families about the option of genetic testing so that couples can avoid passing the disease onto their children through the use of preimplantation genetic diagnosis (PGD) or in the event of pregnancy – and depending on the couple’s personal and religious beliefs – early termination of the pregnancy. She wants SuperTerry to “save the children” from HD.

“I would never want another mother to go through what I did,” explained Angela, whose husband at the time (now an HD patient living in a nursing home in Indiana) did not tell her about the disease in his family until after Terry was born and the husband himself developed symptoms. HD families need to “get more proactive” about testing and family planning, she added.

“Terry’s life shows you what you face if you take a chance” by conceiving without all of the information, genetic counseling, and other resources available to HD families, she said.

“It would be best to be proactive to minimize that situation,” Angela continued. “It’s a lifelong situation. I’ve watched Terry grow up and deteriorate. There are so many challenges. We’re forever fighting.