Do we need to shock the world to strengthen the Huntington’s disease cause?

May is Huntington’s Disease Awareness Month. During this time, we in the HD community make a special effort to educate the public and our leaders about the untreatable, fatal genetic disorder that affects thousands of American families.

It’s also a time to reflect on the very meaning of awareness and how we build it.

However, from my standpoint as an activist who has worked at all levels of the movement – from local volunteering to statewide stem-cell advocacy to global networking for the upcoming World Congress on Huntington’s Disease – I view the quest for media exposure as a necessary but hardly sufficient condition for awareness-building.

Disease and the public eye

Some recent news items highlight the importance of media exposure, its connection to awareness, and the potential drawbacks of over-emphasizing exposure.

The revelation by actress Angelina Jolie that she had undergone a preventive double mastectomy after testing positive for a breast cancer gene led a sufferer of a lesser-known disease, dystonia, to publish a commentary on the difficulties of building support for research for her condition.

“If I told you what my issue was, you would probably shrug and reply that you’d never heard of it,” wrote Allison Hersh London, the chairwoman of the Young Leadership Council at the Bachmann-Strauss Dystonia and Parkinson Foundation, in an article titled “Disease and the Public Eye” in the May 18 edition of the New York Times. “There aren’t any public service announcements about it or telethons. No Angelina Jolies to bravely inform the world. Just people like me, in supermarket checkout lines.

“And this, I realize, is at the core of a problem that extends beyond me and my condition and that affects the way all of us respond to illnesses, some of which are the subject of public attention — and resources — and some of which are not.”

Sound familiar? It’s what the HD community said for decades. The only famous American to die of HD, Woody Guthrie, left us almost 50 years ago.

But now read what London says about HD:

“It’s odd to find yourself envying people who have diseases that get more attention than yours,” she wrote. “But I can’t help it. Dystonia is quite rare but, by some estimates, there are more people who have it than have Huntington’s disease, A.L.S. and muscular dystrophy combined. So the simple prevalence of an illness doesn’t explain why some illnesses are better known and better studied than others.”

Although recognizing that dystonia isn’t neurodegenerative or fatal, London uses the very same tactic of comparing disease numbers that some of us in the HD community – including myself – have used to justify more attention and research dollars for our disease.

What’s odd for me as an HD advocate is to see Huntington’s referred to in this manner. Despite HD’s occasional presence in the news and entertainment media over the past five decades, most people in the supermarket line still would say: “never heard of it.”

HD people do know about dystonia, however. In fact, before my mother was tested for HD in 1995, one doctor first thought she had that disorder. In addition, many HD patients do have dystonia as a symptom.

Citing a research study called the “Katie Couric Effect,” London affirms that a celebrity connection to a disease “can have a substantial impact on what the public does.”

London repeats what we’ve all heard: “Awareness generates funding, and funding generates research, which can lead to enormous life-changing differences for people who struggle with illnesses you probably haven’t heard of.”

Nevertheless, she concludes, “what’s most important is telling people about the disease” on an individual level.

‘I Wish My Son Had Cancer’

In England, Alex Smith, a father fighting to save his son Harrison from the fatal condition known as Duchenne muscular dystrophy, took out an ad in London’s Evening Standard. 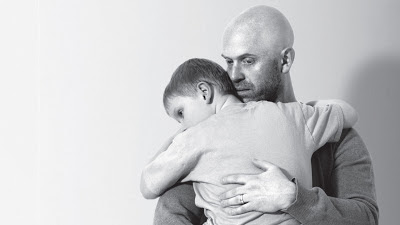 The ad photo (above) could just as easily represent a parent from an HD family, like the one I took at last year’s HDSA national convention of little Kayden Bujnowski, at risk for developing juvenile HD, her HD-afflicted mother Heather Lewis, and her father Jason Bujnowski (see below). 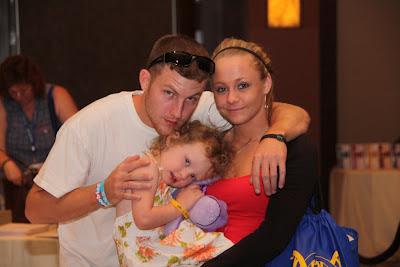 However, in the case of Harrison, the parents and the ad agency headlined their ad with the words “I Wish My Son Had Cancer.”

“Harrison, my 6 year old, has Duchenne Muscular Dystrophy,” the ad states. “He’s one of 2,500 sufferers in the UK who’ll die from it, most before they’re twenty. Unlike cancer, there’s no cure and no treatment. And because you’ve never heard of it, very little funding either.”

"So far, the finished ad has received considerable support among other parents of children with Duchenne," journalist Meg Carter wrote about the ad, noting that people from far away as Brazil have donated a total running into the thousands of British pounds towards research for treatments. "However, some online comment on the charity's Facebook page has questioned the merit of, in effect, setting up different childhood illnesses in competition for donors' support."

As I wrote about Jolie’s preventive operation, people in the HD community would jump at the opportunity to reduce their level of risk for a disease that is 100% genetic and eventually strikes every carrier of the gene.

Indeed, we are desperate for treatments.

However, I cannot recall any instance in which a family or HD organization went to such extremes to generate publicity and funds.

Many forms of awareness-building

In seeking media exposure, we in the HD and other disease movements attribute to it an almost magical power to solve all of our problems and instantly bring the cure.

In the process, we can lose sight of the many other, equally important forms of awareness-building.

Practically everything we do in the fight against HD involves awareness-building: the doctor-patient relationship, informing people in our workplaces and community, and advocating in the public arena for such issues as stem cell research and passage of the Huntington’s Disease Parity Act.

All of this is hard work. And it lacks the glamour of the fifteen minutes of TV fame or a 700-word newspaper op-ed piece.

The most important form of awareness-building takes place in our families and at the level of the individual affected by HD.

Because of the fearful symptoms and deep stigma associated with HD, so many of us hide in the terrible and lonely “Huntington’s closet.” The first step in awareness is to exit that closet and strive to build a family conversation about HD.

In our rapidly advancing biotechnological era, in which scientists have solved many of the mysteries of HD and opened the way to potential treatments, awareness-building also means confronting challenges such as genetic testing and grasping why it’s significant that we join research studies and clinical trials for defeating the disease.

It all begins with each of us. In building self-awareness with respect to HD, we can take the next big step of talking to a relative, joining a support group, visiting an HD clinic, and, when the moment is right, sharing our stories in the way that so many HD families do in the daily e-mail features of the Huntington’s Disease Society of America (HSDA) in May.

Deep pockets and working behind the scenes

It’s understandable that people with dystonia, Duchenne’s, or Huntington’s want to persuade or even shock the public into supporting their cause.

However, most of the process of fighting a disease takes place in physicians’ clinics and scientists’ labs. In America, a vast biomedical and pharmaceutical system discovers, produces, markets, and administers treatments. The politics and finances behind this system operate far from the public eye and, usually, media scrutiny.

In the fight against Huntington’s disease, the dogged determination and leadership of individuals such as Marjorie Guthrie, Woody’s widow and the founder of HDSA, and the Wexler family of the Hereditary Disease Foundation proved crucial in building both the public and self-awareness of the HD community and paving the way to key discoveries that have brought the hope of treatments.

Since 2003, however, the leadership in HD therapeutic research has come largely from the CHDI Foundation, Inc. Backed by a group of anonymous donors, CHDI spends tens of millions of dollars annually to fund drug-discovery projects. It also holds highly technical conferences to discuss the worldwide efforts to find treatments.

CHDI works without celebrities. While it has made waves in the world of science, it quietly goes about its work towards one goal – stopping Huntington’s disease – albeit HDSA shoulders the responsibility of advocacy, awareness, and services to HD families.

In the context of our biomedical system, CHDI illustrates a key point: having deep pockets and working behind the scenes can play as large a role – if not greater – in combatting a disease as public awareness.

HD scientists do find inspiration in the stories of HD patients.

However, they are also motivated by the deep curiosity characteristic of science researchers. HD provides a daunting challenge, one that has attracted some of the best scientific minds of our era. Additionally, it serves as a model for studying other genetic and neurological conditions, and the tools and techniques used in HD research can be applied to other scientific questions.

The momentum of science means that diseases even rarer than HD are benefitting from increased research and funding, as pointed out by Carl Zimmer in an article on fibrodysplasia ossificans progressiva, a genetic disorder that disables people by causing them to grow extra bones, in the June 2013 issue of The Atlantic. HD affects an estimated 1 in 10,000, the bone disorder 1 in 2 million!

“The medical establishment itself has shifted its approach to rare diseases, figuring out ways to fund research despite the inherently limited audience,” Zimmer observed. “Although rare diseases are still among the worst diagnoses to receive, it would not be a stretch to say there’s never been a better time to have one.”

In discovering a drug for a disease like HD, many important parts of the story will emerge only years later. Some aspects may never reach the public arena.

What counts most is stopping the disease.
Posted by Gene Veritas at 11:36 AM

Our Family who died from Huntingtons so far as we know:
Family Medical is part of Genealogy
Do you have a Medical Tree in your genealogy? I think everyone should add one if they do genealogy so that family will know what runs in a family. We have lots of Heart attacks, Alzheimer, Pulmonary, Cancer of all types. But the one I am tracing now is so mind bundling that it makes me sick to my stomach each time I add another family member. This gene, even thou it was carried on by my Husbands grandfather, it skipped his dad but not his dad's siblings.