The defeat of Huntington’s disease could hinge in good part on how well the HD movement in developing countries, in cooperation with national governments and international HD organizations, can alleviate poverty and other social problems that hinder efforts to engage affected people in the fight against the disease.

Eyeing the excellent scientific progress towards treatments but also the barriers to greater family involvement, the global HD community this year will focus on Brazil, a leader in the developing world and the host of this year’s World Congress on Huntington’s Disease, scheduled for September 15-18 at the Sheraton Rio Hotel & Resort in Rio de Janeiro.

The sixth world congress since the inception of the event in Toronto in 2003, this first-ever gathering of this magnitude in Latin America will draw hundreds of HD researchers, physicians, activists, and affected individuals and families from around the region and the world to hear presentations on the latest HD research and participate in activities aimed at helping HD people and their families cope with the disease.

Brazil, the host of the 2014 World Cup in soccer and the 2016 Olympic Summer Games,  has emerged as a global economic power, tied at sixth with the United Kingdom in world Gross Domestic Product rankings.

With over 190 million people, the world’s fifth largest population, Brazil could add potentially hundreds, if not thousands, of participants to the recently inaugurated Enroll-HD program, an international study of HD patients, at-risk individuals, and their families. Enroll-HD aims to increase knowledge of the disease and the pool of participants for research studies and clinical trials, which are crucial for developing and testing treatments.

However, despite its growing geopolitical and scientific-medical significance, Brazil remains far from First World status, with tens of millions of people still living in poverty unimaginable to most Americans and Europeans, high levels of corruption, frightening urban violence, and a weak public primary and secondary educational system.

On the HD front, awareness, fundraising, and research in Brazil lag far behind the U.S., Canada, and Europe.

“The congress had to be in Brazil,” said Dr. Mônica Santoro Haddad, a leading neurologist and member of the local organizing committee. “Brazil needs to take on a position of leadership in the region.”

However, Dr. Haddad added that within Brazil the HD community must be “more active in its decision-making, not passive.”

In her 25-year career, Dr. Haddad has attended to some 400 HD-affected families at her clinic in the region’s largest hospital, the Hospital das Clínicas of the University of São Paulo. She has followed 50 more families in her private practice.

At the 65th AAN meeting in San Diego last month, the ebullient Dr. Haddad granted an interview about HD in Brazil and the goals of the World Congress. She spoke passionately in Portuguese – the language I learned for my academic research as a historian – about the great hopes for HD treatments in the coming years, the need for the Brazilian HD community to become better organized, and Brazil’s potential to make a difference in the HD field. 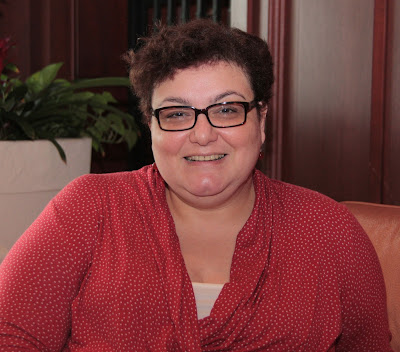 “We’ve got a herculean task before us, which is to change two cultural trends,” Dr. Haddad said. “One is the question of discrimination. Within the families themselves I hear, ‘Whoever has the disease is a worse person than those who don’t have it.’

“That makes absolutely no sense. People who have Huntington’s are more than a defect in their genetic material.”

The other trend involves resistance to private fundraising, a societal challenge throughout Brazil. Whereas private U.S. sources have provided hundreds of millions of dollars for research and care programs over the past two decades, the ABH gets by on a startlingly humble annual budget of $40,000, all of it from small donations from HD families.

“A cultural trait of Brazilians that is very different from Americans is that many Brazilians don’t have the habit of donating money or time to causes, whether they be scientific or cultural or artistic,” said Dr. Haddad. “I admire that in American culture.”

“Unfortunately, I’ve seen people in my private practice who have a lot of money and use that money to simply hide or minimize the fact that they’re from families with Huntington’s,” she added. “In Brazil, people don’t donate, because they believe that if they do, they’ll be compromising themselves and publicly assuming a cause. They’re not capable of donating anything to the cause, even anonymously.”

The Brazilian way of denial

As in the U.S. and elsewhere, fear and denial frequently underlie people’s decisions to avoid genetic testing and facing the terrible medical and social challenges posed by the disease.

“Brazil is a country where, ten years ago, and even among people today, almost nobody said the word ‘cancer,’” she said. “People said: that disease. That prejudice is something that people inherited. They want to keep a distance between themselves and disease, because it’s a magic way of protecting themselves against disease. Embracing a cause of that type and assuming publicly that there’s a problem is very difficult.”

With HD, she added, people rely on a similar “magical way of thinking, such that, if one doesn’t undergo genetic testing, it’s as if one doesn’t have the disease. ‘If I don’t think about it, it ceases to exist.’”

“My impression is that Brazilians think that if they don’t know much about the disease, or if they don’t participate in some way and attend meetings, that they will perhaps be protected,” she said. “Precisely, the challenge for people at risk for the disease is to understand that they need to participate in clinical studies, the ABH, and epidemiological studies. Without their help, we’re not going to find the best solutions for Huntington’s patients.”

The situation described by Dr. Haddad is exacerbated by the general ignorance about HD in Brazil. Most physicians and other health professionals fail to understand the symptoms, she said.

“Unfortunately, there must be a lot of people incorrectly diagnosed, simply diagnosed as having ‘degenerative disease X,’ without anybody following up,” she said. “Perhaps the government doesn’t even know exactly what Huntington’s disease is, because it has to deal with so many other widespread and serious health problems that affect our population.”

From handouts to changing lives

“Unfortunately, some people are so poor, that they want to ask for diapers or a simple dwelling to reside in,” she explained. “I believe that the function of the ABH is to obtain benefits for the entire community. It’s okay if you need a pack of diapers. But that is not going to change people’s lives.”

Among other goals, Dr. Haddad explained, the ABH and the HD community need to lobby the Brazilian Congress, push for a national HD day or month, continue to raise awareness about the disease among health professionals, obtain social security benefits and free medications for HD-affected individuals, and seek funding from government agencies.

Although São Paulo has world-class physicians and medical facilities, she runs her HD clinic with just two other health professionals and an occasional intern.

“It’s important to train health professionals capable of detecting Huntington’s disease or at least suspecting what it is and then referring the person to a larger facility to make the diagnosis,” Dr. Haddad explained. “We need to create ways, in a country the size of Brazil, to transfer this knowledge via video-conferences or a distance-learning center that can answer people’s questions.”

Individual members of the HD community also need to understand the impact of their inaction, Dr. Haddad added.

To illustrate her point, she used the example of organ donations. Many people reject the idea without thinking of the consequences, she said.

“I joke with them: ‘If you wrote down that you don’t want to receive an organ donation, that would require you to think more about the matter and to put yourself in someone else’s shoes,’” she said.

Goals at the World Congress

Together with other physicians and leaders of the HD community, Dr. Haddad hopes to use the 2013 World Congress to stimulate the movement in Brazil.

“The families are excited,” she said.

Dr. Haddad observed that the congress will provide them with access to world-class expertise on HD. The official language will be English, but all sessions will have simultaneous translation into both Spanish and Portuguese.

Dr. Haddad also hopes that, by exposing Brazilians to people from HD entities in other countries, the congress will drive home the point about “the importance of organized participation.”

The congress also has created an opportunity for the ABH and neurologists to inform Brazil’s Ministry of Health about HD, invite ministry officials to participate in the congress, plan strategies for improving the lives of HD-affected families, and pave the way for the success of Enroll-HD.

Yet another key goal will be to put “Brazil on the map of Huntington’s disease research,” Dr. Haddad added. In this respect, the congress will demonstrate to foreign researchers the excellence of Latin American researchers, she said. It’s also an opportunity to recall the key role of HD people in Venezuela in the discovery of the HD gene, a process that culminated in 1993. (At 2 p.m. EDT tomorrow, April 3, a symposium on the 20th anniversary of the discovery will take place in Washington, D.C. It can be viewed live at: http://www.ustream.tv/channel/hdgene.)

In presenting the aims of Enroll-HD at the congress, Dr. Haddad and a colleague hope to suggest to Latin America’s basic researchers the opportunities for research in the HD field. Currently, only a few basic researchers in Brazil focus on HD.

She said that they want to show Brazilian scientists that HD “is a very interesting disease to study,” providing, for example, a model of experimentation that can be used in other areas of research.

For the first time, Enroll-HD is taking the study of HD and the search for treatments global in a coordinated way. Working with groups such as the Latin American Huntington’s Network, it seeks to secure the international cooperation and volunteers necessary for success.
Supported by the CHDI Foundation, Inc., the multi-million-dollar non-profit virtual biotech firm aimed solely at finding HD treatments, Enroll-HD in Latin America gets under way this month in Argentina. Dr. Haddad, the lead coordinator of the project in Brazil, estimated that it will start there in the first half of 2014.

As in some other Latin American nations, where patterns of colonization and intermarriage in some isolated areas led to a prevalence of HD at rates hundreds of times higher than the U.S. average, Brazil has some examples of an extremely high occurrence of the disease. In the town of Feira Grande, for example, researchers found 22 patients in a population of just 22,000 people – ten times the U.S. rate.

“Brazil can contribute a lot (to Enroll-HD), because we have a large number of people who could participate in clinical trials and who might be those ‘gifts of nature,’” Dr. Haddad stated. “These are people who have developed the disease in a different, less harmful way, due to a modifier gene, for example, and who can be studied so that we can reproduce their experience for others through the use of new kinds of treatments.”

Enroll-HD will include the collection of blood, cerebral spinal fluid, and potentially other biological samples (such as skin and urine) to be shipped to a bio-repository in Milan, Italy. Researchers everywhere will be allowed to apply for permission to use the samples.

Extending the work she and others have carried out in Brazil and other parts of Latin America in recent decades, Enroll-HD will enable physicians to improve the care of HD patients, especially those living in poverty, Dr. Haddad concluded.

As part of the worldwide effort against HD, those patients could help provide the keys to victory.

(For a recent article on the question of poverty and HD research in Latin America, click here. Also see the ongoing story of efforts by the Hereditary Disease Foundation to assist HD families in Venezuela by clicking here. In a future article I will feature the work of the Associação Brasil Huntington.)
Posted by Gene Veritas at 7:25 PM