Great reasons to be a guinea pig

Huntington’s disease is a 100-percent genetic condition, so, because I tested positive for this brain disorder, I have no control over its cause. I will develop symptoms. After receiving my test results ten years ago, I could have gone into a cocoon or committed suicide or lived in reckless abandon. Instead, I decided to control what I could.

I became active in all senses of the word: watching my health, raising awareness about HD, participating in the local support group, and, as an activist for the Huntington’s Disease Society of America (HDSA), doing my small part in the effort to find treatments and a cure.

I have also taken part in numerous experiments designed to bring scientists a clearer understanding of the disease. I basically have become a guinea pig in procedures that are often repetitive, tiring, and sometimes downright boring.

They can also be very intimidating, because they force me to focus on my medical situation when I’d rather be doing something else.

But these experiments are vitally important for preparing the way for effective clinical trials. To see if a potential treatment is working, researchers must have a baseline of information about HD symptoms, including the practically imperceptible early signs of the disease in gene-positive individuals like me.

In fact, because of a shortage of test subjects, Huntington’s clinicians have been sounding the alarm for the need for more at-risk and affected individuals to join the experiments and also current and upcoming clinical trials for potential drugs.

Dr. Martha Nance, the director of the HDSA Center of Excellence in Minneapolis, has noted in a recent article that the lack of willing research subjects will “delay the development of new treatments for HD.” Similarly, Dr. LaVonne Goodman, the founder and director of the Huntington’s Disease Drug Works program (HDDW), has written that clinical trials “will accomplish little if we don’t take the next steps to maximize participation” (click here to read Dr. Goodman's article).

Many experiments, much information

I began the experiments after learning in 1995 that my mother had Huntington’s. I gave blood to be screened for the genetic defect. At that time I took the first in a series of occasional batteries of neuropsychological tests, which involve memorizing words, comparing objects drawn on paper, distinguishing the names of colors from actual colors, and other kinds of mental exercises. I have also lain for hours in functional MRI machines that took images of my brain as I slept or as I played a kind of video game with my fingers.

Scientists have even established that gene-positive individuals will suffer changes in their sense of smell. Accordingly, I took part in an experiment where I spent a long time sampling and identifying different smells of small amounts of substances presented to me in tiny cups.

I have also responded to questionnaires for the National Research Roster for Huntington’s Disease Patients and Families, a three-decade-old study of HD families headquartered at the University of Indiana.

And I am a participant in HDDW. I take HDDW supplements every day (the sugar trehalose, coenzyme Q-10, Omega-3 fish oil pills, blueberry concentrate, and creatine) in the hopes of staving off symptoms. I am required to do a periodic battery of tests on my home computer, such as tapping keys and performing mental exercises similar to the neuropsychological tests described above. In effect, I’ve been participating in a clinical trial of a kind of HD cocktail.

The importance of the experiments and the stresses involved weighed upon my mind on July 13 as I took part in yet another experimental session, this one at San Diego State University.

The experiment focused on my motor control – the ability to move in a coordinated manner and to maintain stability. I had participated in the first phase of this experiment a year ago, and this latest session aimed to see if there was any change in my situation. Like most of the other experiments, it was designed to see if I am showing any symptoms of the disease so early and so slight that only a machine or a computer can detect.

First, I had to listen to about 60 beeps on a speaker and tap one of my fingers on a sensor in synch with each beep. A computer recorded my reactions for the research assistant in charge of the experiment.

I knew the experiment would probably include a test of this kind, so I prepared carefully in the morning. I didn’t want to do my daily stretch but did anyway in order to be as limber as possible, thus allowing me to have good posture and maximum dexterity.

I sat before the two sensors – one for the right hand, the other for the left – like a sprinter the moment before the starting gun is fired in the 100-yard dash. At first I made mistakes and did not keep up the tapping after the beeps had stopped, as the instructions had required. By the end I was trying to anticipate the first beep in order to make my first tap at the same time. 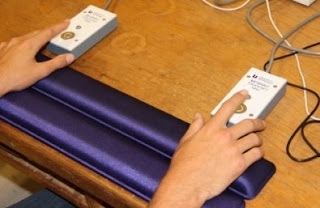 As in other experiments, I needed to prove to myself that I had no symptoms. I strived to match the machine’s impulses as closely as possible. And, I thought, if I do have symptoms, I wanted my brain to compensate for them with the total concentration and energy I was devoting to the experiment.

Like the man who uses his intelligence to control his schizophrenia in the film A Beautiful Mind, I want to believe that I can outsmart these machines and ultimately Huntington’s disease itself.

In the next room I stood on the platform of a device used to measure balance. The SMART Balance Master, made by NeuroCom International, Inc., consisted of foot plates and surrounding scenery that both moved. The research assistant strapped me into a safety harness that would catch me in case I fell. In various tests, with my eyes opened and closed, I had to maintain my balance as the computer recorded reactions through foot sensors. 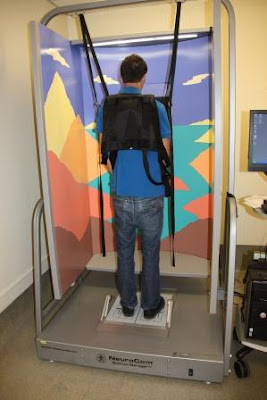 A research assistant demonstrates use of the balancing device.

I kept my balance with little effort and without the need of the harness. But I thought of how terrifying an experience such a machine would present to a Huntingon’s disease patient such as my mother, who died of the disease in 2006. In the last few years of her life she fell a number of times, once breaking a wrist, another time suffering a large gash on her head that required several staples. She would have found it practically impossible to remain standing in this machine, even though the movements are quite manageable for the normal person, akin to jerking motions on an escalator.

I did not ask the research assistant if he had detected any subtle symptoms of HD in my tests. I was not interested in such information, preferring instead to think that I had easily passed.

I need to continue thinking of myself as an asymptomatic at-risk individual. To learn that symptoms had started might prove too devastating to me at this time.

A sense of accomplishment

I ended the experiments with a sense of relief. I had once again stared down Huntington’s disease and, at least as far as I can tell, came away the victor.

As I look back on the day and the many other experiments in which I have participated, I have a deep feeling of satisfaction at having contributed to the gathering of knowledge about the disease.

The discomfort of having to think about HD and my mother’s demise is an extremely small price to pay for helping prepare for the day when treatments could help me and thousands of other at-risk individuals avoid early symptoms.

By participating in experiments, I’ll also be keeping myself properly informed about treatments as they become ready.

Testing centers urgently need more subjects to take part in their experiments and clinical trials. Everybody can help: patients, at-risk individuals, relatives, and friends. Even if you and your family are not affected by HD, you can encourage affected families to participate and help ease the burden by driving them to the testing centers or assisting in other ways. Please contact HDSA or your HDSA chapter or Center of Excellence to learn more.

Those of us touched by HD cannot change our genetic reality, but together we can help build the mass of knowledge that will help scientists select the right treatments and fine-tune them so that people of all levels of risk and disease can benefit.