Billboards: an old – but also new – way of projecting the Huntington’s disease cause

The San Diego Chapter of the Huntington’s Disease Society of America (HDSA-San Diego) has taken its advocacy to a new level with billboards announcing a chapter fundraiser, the Fifth Annual Team Hope Walk on April 10.

At five high-traffic locations in the San Diego area, the billboards went up on March 7 and will remain up for 30 days, according to Misty Daniel, the HDSA-San Diego vice president. Misty originated the billboard idea, the first time it’s been used in the San Diego chapter, one of the most active in the country.

The billboard calls on the public to “register today” for the Hope Walk at the website www.TeamHopeWalk.com. 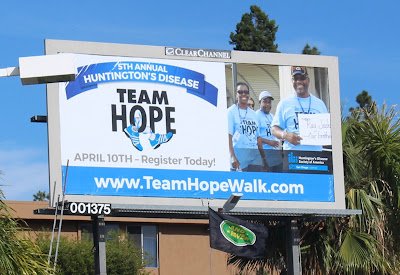 “As a group, we’re not very good advocates for ourselves,” Misty said of the HD community in a phone interview. “This disease affects as many people as cystic fibrosis, but you’ve heard of cystic fibrosis.”

“It’s not just that it’s a rare disease, but it’s rarely known,” she explained. “I’m tired of educating physicians and telling people that I have this in my family and them not having a clue about what it is.”

Misty said she wants the billboards to bring awareness of HD to the “point where I say, ‘I lost my mom to Huntington’s disease,’ and they’ll say, ‘I know what that is. I’m sorry.’ It’s getting harder and harder to use Woody Guthrie as my person to reference. More and more people are saying: who is Woody Guthrie?”

Guthrie – one of the greatest American folk singers of the 20th century and the composer of “This Land is Your Land” – died of HD in 1967, at 55. That year his wife founded a network of HD support groups and advocates that would become HDSA.

Billboards are a traditional, “old media” way of generating publicity. However, in this case they project a 21st-century imperative: the need to cure neurological diseases. They reflect the ongoing high level of creativity in a community facing one of the most devastating of those disorders (click here to read more).

At 38, Misty is a passionate, resilient veteran of the HD cause.

She became an advocate for HDSA-San Diego when she was just 19. She lost her mother Rosie Shaw to the disease in 2007. Misty tested negative for HD two years later. A brother with HD died in a motorcycle accident, losing control of the vehicle perhaps because of the disease. Her sister Brooke, 46, has HD symptoms. Three other siblings remain untested.

Misty speaks at HD events such as the chapter’s second annual convention, held March 5. (I’ll have more on this event in a future article.) She advocates for the passage of the Huntington’s Disease Parity Act, a bill in Congress to update the Social Security Administration’s long outdated definition of HD as a disease causing only involuntary movements. That situation prevents people affected by psychiatric and cognitive symptoms from qualifying for Social Security disability payments. In addition, she assists drug makers involved in HD clinical trials and other HD research.

Misty also helps organize the local Hope Walks. About a year ago, she started thinking about the possibility of billboards.

“HDSA does not spend any money on advertising – not nationally or locally – because we want as much of the dollars raised to go to HD care, advocacy and research as possible,” HDSA CEO Louise Vetter said in an e-mail. “This is an important policy and principle in how we steward the funds raised for our fight.”

So Misty and other advocates raised the $2,000 needed to pay for the billboards. One of Misty’s untested siblings donated $1,800. The Clear Channel media company, the owner of the billboards, charged a nonprofit rate.

“At the end of the day, this is what HDSA-San Diego is all about: grass roots efforts,” Misty said. 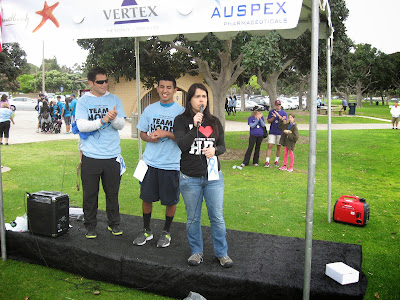 “Huntington’s disease has carried a stigma for so long,” Misty said of the need for the billboards. “We continue to perpetuate the stigma generation after generation.”

The fear in HD families is “overwhelming,” she continued. That fear “is not only palpable but it is a real reason to control how we talk about” HD and share about it.

However, Misty has sensed a change in the community.

Misty hopes that the billboards will catch the attention of other HD-affected families in the San Diego area who until now have had no contact with the chapter, events, and support group.

According to Vetter, advocates in the Upper Midwest used billboards in the early 2000s. In addition, some national ad campaigns have run in magazines like TIME.

“Billboards are a great way to raise visibility of the Team Hope program and HD to the broad San Diego community,” she said. “They can spark curiosity to learn more about HD, as well as fuel engagement to take part in the Walk.

“Additionally, these billboards can validate the participation of those who are already part of our fight to help HD families. When you see an ad or a billboard about something you are involved in, it breeds pride and a deeper connection to the cause. For the HDSA San Diego Chapter, this can mean new volunteer leaders and the ability to have a greater impact.”

More than a logo

To stir broad interest, the billboards portray a family at a previous Hope Walk in another city.

Unidentified, the family has a sign with the words “I’m walking for: Ray Jacks – our brother.” (On the billboard it’s not clear whether the surname is “Jacks” or “Jackson.”) 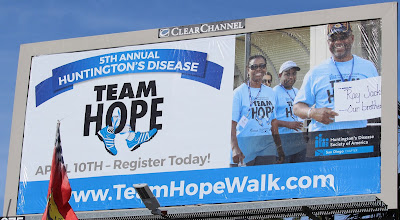 Another angle of the billboard (photo by Gene Veritas)

As of this writing, I was unable to identity neither the family nor the person for whom they were walking. Regardless, Misty stressed that including the photo was highly important. (All HDSA walkers sign a waiver permitting use of their photos, she noted.)

“We wanted to make sure that the billboard had actual people on it, because this is a disease that has been faceless for too long,” she said. “We felt that if it had only a logo, we would be doing the Huntington’s disease community a disservice.

Later Misty hopes to reach out to the family.

“I want them to know they’re on this billboard,” she continued. “This generation is walking on behalf of those who can no longer walk for us.”

It strives for a cure, she said, to prevent another generation from suffering from HD.

Please support my family’s team, the "Serbin Family Team," in the 2016 HDSA-San Diego Hope Walk by clicking here to join us and/or make an online donation. 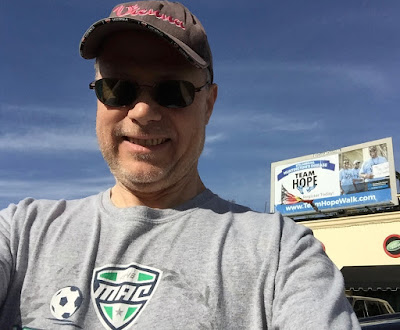 A selfie of Gene Veritas, aka Kenneth P. Serbin, at the billboard
Posted by Gene Veritas at 2:24 PM No comments: