I could feel the love flowing in the Leach family for 12-year-old Terry, who struggles against the ravages of juvenile Huntington’s disease. (Click here to read my article about Terry.)

During my visit to the family on November 27, I watched big brother Charles, 18, pick up Terry and carry him from one room to another.

I heard how little brother Richard, 9, helps Terry put on his socks every morning and prepares his bowl of cereal.

I listened intently to Jennie, his 17-year-old sister, who wheels him out to the school bus at the start of each day. She is a virtual repository of profound observations about Terry’s daily fight to live with a disease that has afflicted him since infancy, stopped him from walking and talking, and, medical statistics suggest, reduced his life expectancy to fewer than 20 years.

I sat next to Angela, Terry’s mom, as she leafed through a massive binder of her handwritten notes and official medical reports on his condition, including the document revealing the results of Terry’s positive genetic test for Huntington’s. She works full-time, takes Terry to his frequent doctor’s appointments, and holds together a family whose HD-stricken father departed for another state after he left a legacy of an HD-affected son and increasingly aggressive, disruptive behavior.

And I conversed with Terry, who understood all of my questions and responded by tapping letters and symbols on a special touch-screen computer that translated his commands into words and sentences. I perused his report cards, filled with A’s, and I held the beautiful Mother’s Day card that he made for Angela by painting flower petals with his thumb print. 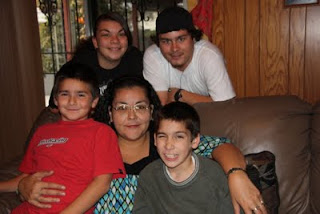 On that day I learned a very important lesson about Huntington’s disease, a lesson I had failed to fully comprehend about my own mother, who died of HD in February of 2006: no matter how fateful HD’s symptoms, the inner mind of an HD person remains vibrant.

Many people react to Huntington’s people by turning away, figuratively or literally. At times I could not bear to countenance my own mother – she was a “genetic mirror” reflecting my own likely future. I have written frequently about HD’s dehumanization of people and its destruction of families.

But Terry and his family drew me into their lives and showed me the great reservoir of humanity to be found in this predicament – especially if love is not forgotten.

And Terry’s eyes show the spark of desire to live life to the fullest.

Terry’s family badly wants him to have that life. They have made great sacrifices.

Because of a demanding schedule centered on Terry, for years Angela had to postpone involving Richard in after-school activities. “Richard did football for the first time this last season, and it was tough,” she told me. “Now I know why I shied away from doing things like that with him.”

Terry’s younger brother is one of his caregivers. “He’s grown up a lot,” Jennie said. “He’s nine years old but he acts like an adult.”

I asked Angela about her hopes for Terry and the pressures of being a caregiver.

“To provide him with the best-quality life that I can,” she replied.

“I’m going back to school to study accounting. I hope it can help me focus my energy on something good. Sometimes I feel helpless. As much as I can do for him or anybody can do for him, it doesn’t feel like it’s helping him in the long run. I worry about the future.”

After my interview with the family, they agreed to shoot a short video with a holiday greeting. At first Angela was nervous and at a loss for words, but after a few takes everybody finally got it right. Watching them through the eyepiece, I was moved by their strength, togetherness, sense of humor, and spirit.

As I prepared to leave, I told Angela that my mother had died and that I am gene-positive for Huntington’s. She had revealed to me that Richard had tested negative, and I shared with her that my daughter – the same age as Richard – is also negative. (Charles and Jennie are from a previous marriage and are not at risk.)

“We’re all in this together,” I told Angela.

I always tell my daughter a bedtime story. On the night of November 30, after an evening of family frictions resulting from her complaints about fourth-grade schoolwork and not enough play time, I resolved to tell her about Terry and his struggle against the worst of odds.

“Many people have a much tougher life than you,” I told her. “But they don’t give up.”

My daughter knows that I am a Huntington’s activist, but not about my gene-positive status. It was the first time that I used a Huntington’s story to teach her about life. Two days later she asked to see the pictures I took of Terry, and we talked some more about his predicament. She read my article on Terry – the first time she has read something I've written about HD – and watched me place the piece and my photos on the web.

Soon she’ll learn about my own genetic truth.

The Leach family will undoubtedly serve as an important reference point – not only for her, but for many families facing Huntington’s and other devastating neurological diseases.
Posted by Gene Veritas at 6:35 PM

my daughter is 18 she has jhd i have 4 other children one is gene neg and the three little one are all not at risk.. i see our family in this blog. and As my daughter says today is a gift mom. accept and do not expect tommrrow.
she has a blog too.
tara hansen tanyon_24@yahoo.com