Going with the flow of time

Like many in our fast-paced era, early in life I developed an acute sense of time. Patience with others, with life, and with myself was not one of my virtues.

After learning in 1995 that my mother had Huntington’s disease and that I had a 50-50 chance of inheriting the devastating mutation, my anxiety about the passage of time multiplied.

On one level, I definitely came to appreciate the preciousness of time – especially after testing positive for HD in 1999 and seeing my mother succumb to the disease in 2006 at the age of 68.

On another level, however, worries about time have continued to gnaw at my mind. I strive to enjoy life, providing for and spending time with my family, but also to create a legacy as a scholar, writer, HD advocate, and citizen. As I once wrote, “I’m squeezing as much as I can into my life before the symptoms start.”

For a long time I’ve believed that I can somehow trick time, getting more than 24 hours out of a day.

Not long after I had learned of my mother’s HD, one of my students asked me why I walked so quickly around the campus. “I have so much to do!” I replied while pondering my professional ambition and worrying about my vulnerability to the disease.

I frequently recall a radio segment about a former federal cabinet official whose ambition led him to obsess about reducing to the absolute minimum the time spent on each detail in getting ready in the morning.

Identifying with that attitude, I find it simultaneously fascinating and tragic.

Though I know that going to bed at a regular time contributes to good neurological health, I often stay up late, thinking that if I just squeeze in a bit more work or one more TV show, I’ll somehow have gotten more time out of the day.

So much of my life is tied to the mystery of time, including a self-esteem reliant on a sense of accomplishment and recognition. If it weren’t for this damned time, I could do so much more!

Defeating time is the avenue to feeling powerful, and toward the goal of defeating Huntington’s disease.

Ultimately, to defeat time is to defeat death itself. This desire is a not uncommon phenomenon as people age, but the specter of HD makes it unavoidable.

To counteract the anxiety about time and HD, I have employed some key strategies. I work with a psychotherapist, take medications to stave off anxiety and depression, and subscribe to the philosophy of Don’t Sweat the Small Stuff … and it’s all small stuff. I also try to exercise, live in the moment, and to connect with my spiritual dimension, for example, by attending Mass.

When brushing my teeth seems to take forever because I’m anxious about getting to a seemingly more important upcoming activity, I try to remember the advice of the Vietnamese Buddhist monk Thich Nhat Hanh to savor the simplest of experiences as part of the process of life.

I’ve also sought wisdom about time from the scientific minds of our era.

However, after reading biographies of Stephen Hawking and Albert Einstein, I’ve understood clearly how we are in the infancy of defining and comprehending the dimension called time.

We can’t even perceive time with our five senses – except for the fact that our bodies age and diseases like HD take their inevitable toll.

Last month, in a conversation with my psychotherapist, I came to the healthy realization about how I have deluded myself about tricking time.

A few weeks later, I departed with my family for a three-week trip in Europe.

Once again, vacation time provided me with a small but stimulating break from the routine of work and the challenges of living at risk for HD.

Amidst the excitement of visits to cities like Berlin, Prague, and Vienna, I maintained my daily morning meditation.

As we whisked through Europe, the mystery of time once again loomed.

I wanted to stop time so that the great moments with my family would never end. 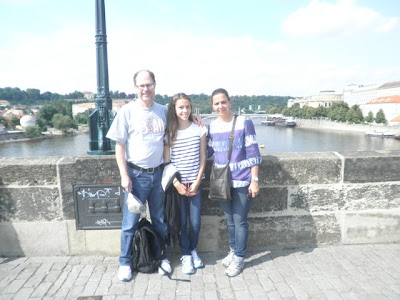 However, during one moment of meditation, I had a mini-revelation about time.

In the days since, I have felt a renewed sense of peace.

I don’t believe outcomes are preordained, but I do feel that I must no longer resist the flow of time.

I cannot extend my time. I must live with the amount I have as best I can.

I must approach life, including the threat of Huntington’s disease, with acceptance, even as I strive daily to make a difference.

Although scientists are working feverishly on potential clinical trials, treatments may not appear in time to save me.

I can help, I can hope, and I can wish progress for everyone in the HD community. But I cannot stop time to wait.
Posted by Gene Veritas at 2:26 PM 3 comments: