In my effort to delay the inevitable onset of Huntington’s disease, I have strived to protect and nurture my brain through physical exercise and the practice of “neurobics,” a simple way of cross-training the brain that goes beyond common methods such as crossword puzzles and memory games. I described this approach in detail in an October 2011 article.

“Neurobics uses an approach based on how the brain works, not simply on how to work the brain,” wrote the late neuroscientist Lawrence C. Katz, Ph.D., and writer Manning Rubin in their book Keep Your Brain Alive: 83 Neurobic Exercises to Help Prevent Memory Loss and Increase Mental Fitness.

As HD researcher Moses Chao, Ph.D., has observed, humans can increase their BDNF levels “through increased exercise or any other kind of novel activity (travel, learning a new language, etc.).”

Thus, neurobic exercises seek to stimulate the less-used parts of the brain. For example, a person can brush his or her teeth with the opposite hand, thus stimulating the hemisphere of the brain opposite that's normally used.

“I have learned that I must focus not only on the quantity of exercise, but its quality,” I concluded. “I need to stop frantically overstimulating my brain and instead concentrate on exercise, Neurobics, and other activities that will increase my BDNF.”

From Brazil to the history of science

Without at first realizing it, I had developed a novel, personal way of stimulating my brain.

Ever since delving into my Ph.D. research in the mid-1980s, I have focused my intellectual career on modern Brazilian history.

After learning of my mother’s positive test for HD and my own at-risk status in late 1995, I began to get involved in a radically different second field – one encompassing science, technology, and medicine – as an advocate for treatments to save my family and others from the ravages of HD. I redoubled this effort after I tested positive for HD in 1999.

In my free time, I read everything I could about HD science and research.

From 2001-2007, I wrote, edited, and produced a tri-annual newsletter for the San Diego Chapter of the Huntington’s Disease Society of America – including detailed articles on breakthroughs and a regular research update surveying the HD science and related fields. I advocated for the adoption of HD stem cell research projects by California’s stem cell institute. Since 2005, in this blog I have reported in detail on research meetings and many of the major projects seeking therapies.

Since my definitive exit from the “HD closet” last November, I have become involved in the national History of Science Society and linked to new initiatives at the University of San Diego in neuroscience and medical ethics.

This endeavor has enriched me intellectually and personally. Although I cannot prove it scientifically, I believe it has helped delay onset. At 53, I am now at least several years beyond the age of my mother’s apparent initial symptoms.

Connecting with the researchers

As Katz and Rubin point out, neurobics can and should include maintaining a rewarding emotional life based on intimate connections to people.

More than ever, I have focused on strengthening the bonds of love with my friends and family.

I have also built emotionally powerful connections with the scientists, physicians, nurses, research assistants, and support personnel involved in the quest for treatments. 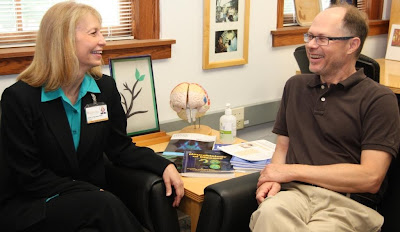 Jane Paulsen, Ph.D., the co-director of the HDSA Center of Excellence at the University of Iowa, with Gene Veritas (photo by Sarah Petitt)

I reflected on these feelings in a speech I gave during a trip last month to the University of Iowa to take part in a key HD research study. The audience included doctors, medical students, social workers, HD researchers, and other staff from health related fields.

After relating my family’s struggles and my work as an advocate, I described how my connections to researchers have served as a powerful coping mechanism. 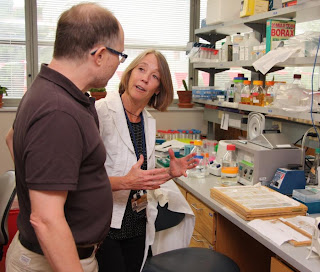 Gene Veritas with Beverly Davidson, Ph.D., in the Davidson Laboratory at the University of Iowa (photo by Sarah Petitt)

As the holder of a doctorate, I said, I have an excellent understanding of the intellectual rigor involved in research and of the role of physicians and scientists in producing knowledge and solving problems.

I strongly identify with the researchers and deeply appreciate their contributions, I observed.

By exploring their work, I gain a sense of usefulness and participation in the cause. It allows me to combat  feeling powerless in the face of a disease that cruelly strips people of their humanity and relentlessly leads to death – without treatment or cure. 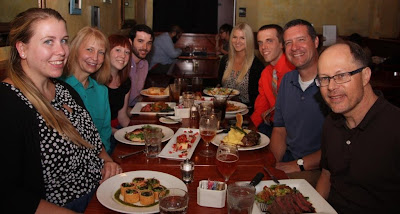 “I feel very humbled, I feel very empowered, and I feel a great sense of hope, because these are the people who are holding the keys to my very survival,” I declared in my presentation.

Ultimately, patients and researchers work together as a team, I said.

“I think that together we’re building a future in a way that supports the patients and their families and seeks to build a better and healthier life for all of humanity,” I concluded. “It’s not just about Huntington’s disease. It’s about all of the other conditions out there…. As a research community in America, as a nation, as a global community we need to work together, and that’s why I’m going to the World Congress on Huntington’s Disease … in September.”

You can watch the entirety of my speech in the video below.

Seeing the larger purpose in our fight has heartened me as I prepare to travel to Brazil for the World Congress.

In my conference presentation on coping with a gene-positive status, I will stress how it’s vital for affected families to educate themselves about the research as a basis for their own advocacy – and for hope.


At the very least, in connecting with – and assisting – the researchers, we can assure ourselves that we have done the utmost to help defeat HD.
Posted by Gene Veritas at 11:20 AM

You have done the UTMOST to defeat HD!!! So proud of you and your persona; accomplishments!!!

You gave an excellent presentation to UIowa. Can't thank you enough for sharing it. Lou

I am so Happy and inspired by your work. Thank you for all your hard work and commitment!