As a bronze medalist in rowing in the 2004 Summer Olympics in Athens and chair of the highly successful British athletes’ commission in the 2012 London games, Sarah Winckless pursued her goals based on strenuous training, teamwork, and effective thinking.

However, Sarah faces a challenge far more daunting than most Olympians could imagine.

Since 1997, when she learned at just 22 that she carries the gene for Huntington’s disease, Sarah has faced the difficult reality of knowing that she will likely follow in the footsteps of her HD-afflicted mother Val, who requires full-time care.

Sarah has kept upbeat by focusing on athletics and her major leadership roles in the British sports and HD communities.

Huntington’s is always a family story. Sarah was the first of four siblings to undergo genetic testing. When Sarah began to feel isolated from her two brothers and sister after all three tested negative for HD, she turned once again to the “thinking challenge” she had learned in sports.

“Suddenly my siblings didn’t know what is was like to open the door of your genetic counselor and know that you’ve got a bad result,” Sarah told an audience of several hundred scientists, drug company representatives, and Huntington’s disease advocates the evening of February 24 in her keynote address at the Ninth Annual HD Therapeutics Conference, sponsored by the CHDI Foundation, Inc., in Palm Springs, CA. “And I didn’t want them to know that. But it made me different. It separated me.”

Sarah said that she “hated” herself for “thinking and feeling that way.”

“I had to choose a thought that brought me back in, that made me part of my family – they’re so important to me,” she continued. “And I did what I always do when I need to think.”

Sarah went out for a long session of rowing, which helped bring clarity to the issue at hand. She had in mind the fact that every child of a parent with HD has a 50-50 chance of inheriting the genetic mutation.

“And it helped, because suddenly I was part of it, and I was with them.”

Sarah struck a similarly optimistic, sometimes even jovial chord throughout her speech. (You can watch an excerpt in the video below.)

At dinner, Sarah regaled a group of conference attendees with other stories from her athletic career as well as her mother’s spirited fight against HD. Though HD patients rarely live two decades beyond onset, Val has now lived with the disease for about 25 years.

I felt infected by Sarah’s optimism.

“In all of my years of dealing with HD, you are the most positive individual I have ever met,” I told Sarah as I prepared to retire for the evening.

I hugged her and gave her a brotherly kiss on the forehead. “You are not going to get HD,” I declared. She smiled broadly as she thanked me.

As an HD gene carrier, I live with the stark knowledge of the disease’s inevitability. However, scientists believe that personal enrichment and staying active and positive might very well help delay onset. And there is the very real hope of an effective treatment for Sarah, me, and the entire HD community. 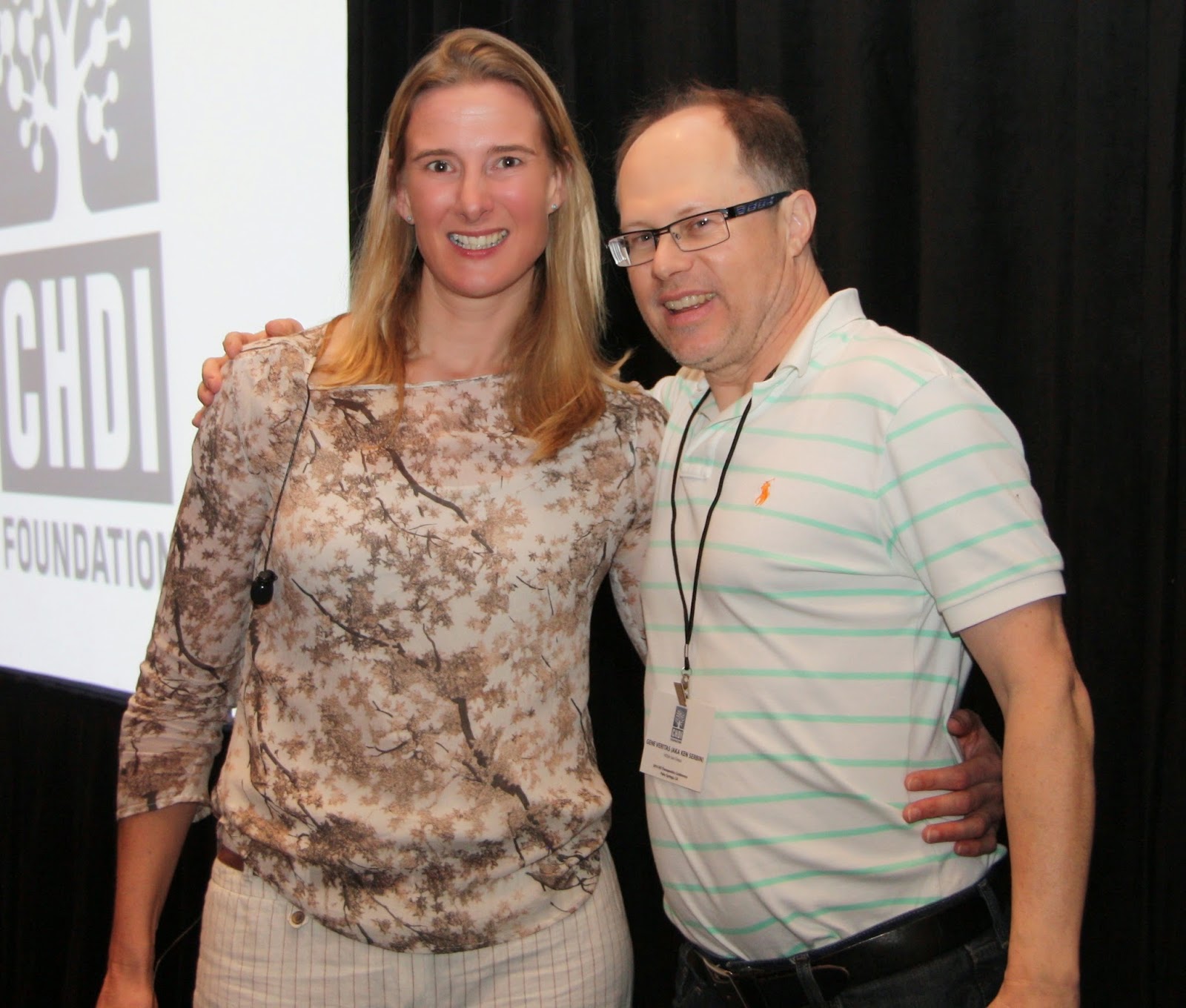 That night and into the next day, I thought of how I need to maintain my own positive attitude – not just to bolster myself in the fight against HD, but to become a better husband, father, coworker, and citizen.

As the HD therapeutics conference proceeded, Sarah’s spirit lived on as the participants presented new research demonstrating a deeper understanding of HD and continued progress in the quest for treatments.

We all need to become infected with Sarah’s optimism.

Like the Winckless family, we must all bond together in this fight.

As difficult and terrible as it may feel, we are never alone.

“Three out of four, we’ve beaten the odds” – despite her own adversity, Sarah found joy in her siblings’ good fortune.

She has reminded us of a key lesson: no matter how difficult our situation, our lives mean so much more than the fight against HD.

Next time: a report on the therapeutics conference.
Posted by Gene Veritas at 10:00 AM