Surveying the vast progress in Huntington’s disease research and a “blitz” of clinical trials now in progress, a key scientific leader in the efforts has predicted that they will produce treatments for the incurable neurological disorder.

“I have every confidence that this batch of clinical candidates that are now being tested are going to yield the first treatments for Huntington’s,” said Robert Pacifici, Ph.D., the chief scientific officer for CHDI, the multi-million-dollar non-profit virtual HD biotech.

Dr. Pacifici’s remarks came in an interview on February 24 in Palm Springs, CA, at the organization’s 11th Annual HD Therapeutics Conference, sponsored by CHDI Foundation, Inc., the backer of the initiative.

Nobody can foretell the result of a clinical trial, and Dr. Pacifici did not specify a timeline for an effective treatment reaching the market. However, he offered examples of the immense progress towards developing treatments.

Dr. Pacifici cited three recent key advances: the ongoing research in biomarkers (signals) to measure the efficacy of potential drugs’ in reducing the harmful presence of abnormal huntingtin protein in brain cells; major progress in identifying modifier genes that delay or hasten disease onset; and the start of clinical trials.

The trials post the most “difficult” challenge in the process, he said.

“We want to make sure that we do things in a way that obviously is very careful,” he said, explaining the primacy of drug safety. “The last thing we want to do is harm anybody.”

Noting that the search for drugs has no guarantees, Dr. Pacifici nevertheless concluded that these are “exciting times” for the community of HD families, researchers, and supporters of the cause.

You can watch my interview with Dr. Pacifici in the video below.


'Every confidence first Huntington's disease treatments' in the works from Gene Veritas on Vimeo.

Until recent years, such good news seemed like a remote possibility for HD Therapeutics Conference participants and, indeed, for the entire HD community.

The most anticipated update focused on the historic trial by Ionis Pharmaceuticals, Inc., to attack the root cause of HD via gene-silencing. 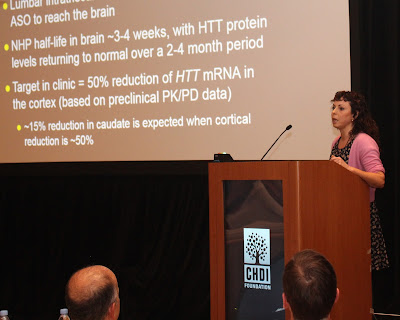 The first group of participants received the first dosing of the drug, IONIS-RTTRX, in October 2015. They received three additional doses at 28-day intervals and were monitored by trial administrators.

“We completed Cohort A, in London and Vancouver, four subjects, and the DSMB [independent data safety monitoring review board] met and allowed us to move to cohort B,” Dr. Tabrizi said. (A DSMB, a standard in all clinical trials, halts a study if patient safety is threatened.)

Administrators of the Ionis trial are currently recruiting volunteers for Cohort B, to be followed by Cohorts C and D, as outlined in the plans for the experiment. In all, 36 patients will take part in Phase 1b/2a. If all cohorts are successful, Ionis will seek approval for a full-blown, larger Phase 2 trial to test drug efficacy.

For further background on the trial, watch Dr. Tabrizi’s update in the video below.

More than a disease

Drawing a record 325 participants from academia, the pharmaceutical business, and the medical field, the conference highlighted cutting-edge HD research, including the structure and function of the huntingtin protein; the huntingtin gene and the human genome; potential gene-silencing treatments; restoration of cell health; and ways to measure clinical trial outcomes.

Although highly dedicated to HD research, many of the non-physician scientists have little if any contact with HD families. This has prompted CHDI to open each conference with a keynote by a representative of the HD community to drive home the human reality of the disease and the urgent need for treatments. (I keynoted the 2011 meeting.)

This year Astri Arnesen and Svein Olaf Olsen, a married couple who have led the HD cause in their native Norway and in the European Huntington Association, delivered a powerful keynote about HD and marital commitment, denial, genetic testing, and raising a family. They titled their presentation “HD – more than a disease!”

I will explore their story and provide an overview of the key scientific findings in a second report on the conference. 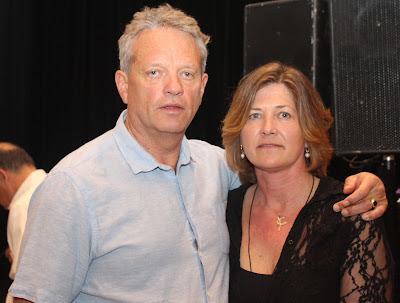 As in past years, the CHDI meeting moved me profoundly.

I identified with the many difficult feelings and experiences recounted by Astri and Svein Olaf.

Once again, the scientists’ presentations reminded me of HD’s devastation of the brain – and of my vulnerability as a carrier of the HD mutation.

But this was a very upbeat conference. I had never spoken before to Dr. Tabrizi, but we hugged as if we were old friends after I congratulated her on the initial clinical trial report. The HD community has waited so long for such news!

Later, after I worked late into the evening on this article and missed the buffet dinner, Jerry Turner, the CHDI staffer in charge of conference logistics, arranged for a care plate of sumptuous leftovers from the kitchen of the Parker hotel, the gracious host of the conference.

I toasted to the success of the Ionis clinical trial and to CHDI’s commitment to the project with Doug Macdonald, Ph.D., CHDI’s director of drug discovery and development and its point man on gene-silencing.

As I told another scientist, I look forward to the day when we can all toast the discovery of an effective treatment.

(Disclosure: I hold a symbolic amount of Ionis shares.)
Posted by Gene Veritas at 11:36 AM

Gene, thank you so much for your updates. As an HD mutation carrier, I always look forward to these. I admire your dedication to get your article out asap, so much that you would miss your conference dinner and stay up late writing! There is certainly a lot of hope and a lot of good news to look forward to. Justine.