The best news for the Huntington's disease community since the discovery of the gene: Ionis trial data revealed, Roche confirms jump to Phase 3


Researchers revealed impressive, if not conclusive, additional information at CHDI Foundation's 13th Annual Huntington’s Disease Therapeutics Conference yesterday regarding the historic Ionis HD clinical trial: the drop in mutant protein observed in the cerebral spinal fluid (CSF) of participants corresponds to as much as an 85 percent decrease in the cortex of the brain, head physician Dr. Sarah Tabrizi announced.

It’s the best news the HD community has received since the publication of the research confirming the discovery of the gene 25 years ago this month. As scientists have observed, it’s also a major step for disease and drug research in general.

“The magnitude of mutant huntingtin [protein] reduction observed exceeds the effect needed for disease modification in animal models,” Dr. Tabrizi, of University College of London (the lead clinical trial site), told an audience of some 350 scientists, drug company representatives, and HD advocates at the conference in Palm Springs, CA. 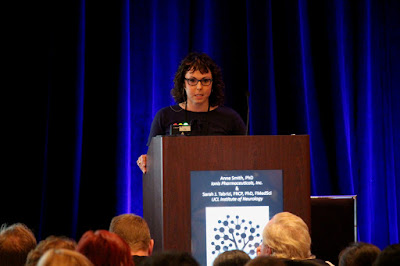 Ionis officials announced in December that the Phase 1/2a trial for the gene-silencing drug IONIS-HTTRx “substantially exceeded our expectations” in safely reducing the mutant huntingtin in the CSF.

For the first time, Dr. Tabrizi’s presentation (plus an Ionis press release) specified the level of huntingtin reduction.

During the clinical trial, participants received the drug via spinal injections, and doctors measured the drug’s ability to reduce the protein by extracting CSF samples.

IONIS-HTTRx lowered mutant huntingtin an average of 40 percent, with a maximum reduction of 60 percent. As Dr. Tabrizi explained, projecting from the numerous, painstaking animal studies done by Ionis, the reductions in the cortex range from 55-85 percent. 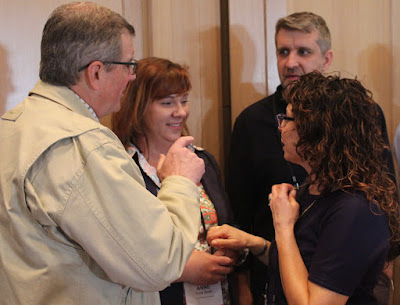 The cortex – along with the striatum, which is critical to motor control and managing the reward system – is the area of the brain most affected by HD. It is the most developed area of the brain, the source of thought and language, abilities severely hampered by HD.

Watch Dr. Tabrizi in the short video excerpts below explain this data and thank the 46 brave clinical trial volunteers and the many others involved in the effort. I also recommend watching the full video – which includes further trial data and a helpful overview of the project by Anne Smith, Ph.D., of Ionis – by clicking here.

The presentation by Drs. Smith and Tabrizi – the first public presentation of the trial data – can perhaps help inspire the HD community and researchers to become engaged in the next, crucial step: testing the drug’s efficacy.

Based on its partnership agreement with Ionis, Swiss pharmaceutical giant Roche, which now holds the license to the drug, will carry out a longer trial with hundreds of participants, including sites in the U.S.

The main question: will symptoms of this progressive, deadly disease stabilize, or even be reversed?

In an interview at the conference, Roche officials told me that – as Ionis had indicated – the company would take the unusual step of skipping a Phase 2 trial (testing efficacy for the first time) and going directly to a Phase 3 (confirming efficacy in hundreds, or more, participants).

They pointed to the excellent results of the Phase 1/2a trial; Ionis’ superb development of the drug; the nonprofit CHDI’s expertise and leadership; and the enthusiasm from – and urgent need of – the HD community.

Roche has officially changed the name of IONIS-HTTRx to RG6042. “R” stands for Roche, and “G” for Genentech, a major U.S.-based pharmaceutical company acquired by Roche in 2009 for $46.8 billion. The number 6042 is a standard drug number assigned by the company. If Phase 3 is successful, a drug issued for commercial sale will get a brand name.

All U.S-based Roche personnel and products still use the name Genentech.

Roche has not yet determined a start date or timeline for Phase 3. I will provide a detailed report on the interview and Roche’s plans, and also my personal reactions to the conference, in upcoming articles. 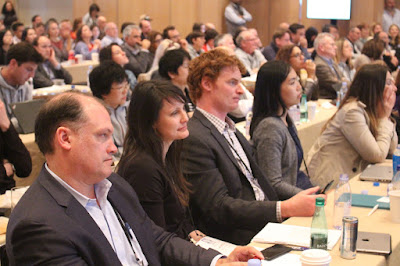 Time for excitement, but also caution

However, he also cautioned the HD community.

“Drug discovery is a really time-consuming and inefficient process, and, sadly, fraught with many failures,” Dr. Pacifici said. “The first time you put something into people, no matter how prepared, you never know whether it’s going to be safe and well-tolerated. What the initial trial showed was that at those doses, with the route of delivery, with that population of folks, it is indeed safe and well-tolerated. (If it wasn’t, it would stop in its tracks.) Once you get to this stage, a lot of the uncertainty about timelines goes away.

“This is really the time to be incredibly careful and incredibly deliberate. It’s going to take a while now to orchestrate the Phase 3 trial. That’s the pivotal trial that tells you whether or not the drug works.”

Everything needs to be done “by the book” to get a really “conclusive result,” he added.

If the trial fails, it will still provide scientists and physicians with guideposts for future research and trials, he said.

“We owe a huge debt of gratitude to those patients who signed up for that initial trial,” Dr. Pacifici concluded. “It’s going to require not only more of that type of participation, but a lot of patience.”

You can watch my interview with Dr. Pacifici about the conference and the Ionis trial in the video below.

A time for excitement, but also great care and deliberation from Gene Veritas on Vimeo.

For detailed coverage of the HD conference presentations, visit hdbuzz.net.

Visit my Vimeo album, to be periodically updated in the coming weeks, for other presentations and interviews at the conference.

(Disclosure: I hold a symbolic amount of Ionis shares.)
Posted by Gene Veritas at 5:09 PM