Vertex and the new wave of Huntington’s research

An increasing number of pharmaceutical companies are targeting Huntington’s disease, raising hopes that multiple treatments and perhaps even a cure could be found for the current generation of individuals affected by this deadly brain condition, including gene-positive people like me.

In mid-2008 the San Diego unit of Vertex began a project to find ways to block the actions of mutant huntingtin protein, which causes the death of brain cells.

Today two small teams of scientists devote themselves full-time to the HD project at this important drug discovery firm. Although they stressed that the project is still very much in the early stages, Vertex scientists spoke enthusiastically about their plans to decipher and attack the disease.

Looking for a pill

The project originated with a collaboration with CHDI Foundation, Inc., the “cure Huntington’s disease initiative” backed by an anonymous donor, but Vertex has branched off on its own and has continued Huntington’s research with internal funding.

“We’re very early (in the research),” said Paul Negulescu, Ph.D., Vertex vice president for research and the site head of the San Diego facility. “But we do believe that it may be possible to influence the course of this disease with small-molecule therapies in the years ahead.” 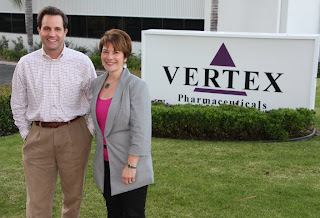 By “small molecules” Dr. Negulescu means that Vertex aims to produce a pill or series of pills that HD people and gene-positive individuals could take to control the effects of mutant huntingtin. Pills represent a far less invasive method of treatment in comparison with others such as an injection, the insertion of a catheter into the brain or the spinal cord, or an operation.

Vertex hopes to extend its research on two promising drug candidates for cystic fibrosis (CF) into the Huntington’s field.

Like HD, CF is a genetically caused condition in which proteins malfunction. The potential drugs help a key protein in CF do its job of keeping the airways of the lungs moist and therefore capable of fighting off dangerous bacterial infections, the most devastating, and ultimately deadly, symptom of CF.

One of those candidates, VX-770, is already in Phase III clinical trials. Vertex will review the data from the trial in the first half of 2011. If successful, the company will then seek approval from the federal Food and Drug Administration (FDA) to market the drug, which would be taken as a pill.

Vertex collaborated closely with the Cystic Fibrosis Foundation and the CF community to develop VX-770 and its other candidate, VX-809.

“We’re going to apply the best science that we can and learn the lessons that we can from the CF program, not only scientifically but in terms of how to work with a disease community that is focused on a single disease,” Dr. Negulescu said of the HD project.

“There are many things that a community brings to a research effort – not only patients and their passion about their disease and helping us understand what’s really important to them, but also to basic research, and, in some cases, like with CHDI and our early efforts with them, access to funding. All of that comes together to create a better chance for success, to make progress on the disease. That’s our model. That’s how we want to go after it, as a community, as a network.”

As part of this community approach, Vertex invited me to present my story about living gene-positive for HD. On September 24 I gave a talk before 50 Vertex employees. It was titled “Gene-positive for hell: my family’s struggle against Huntington’s disease." (Click here to read more.)

On October 22 Dr. Negulescu and nine other Vertex scientists attended the tenth annual Celebration of Hope Gala of the San Diego chapter of the Huntington’s Disease Society of America. It was the largest contingent of scientists from a single company in the history of the fundraising event. (Click here for my account of the gala.)

Recently Vertex’s completed three large Phase 3 trials of one of these drug candidates, telaprevir, in people with hepatitis C. Based on the Phase 3 results, Vertex recently applied for approval of telaprevir from the FDA. (Click here to read a news report on telaprevir.)

“One of the hallmarks of Vertex is that we’re willing to go after the smaller diseases,” said Beth Hoffman, Ph.D., the Vertex vice president of biology and the coordinator of the HD program. "We also are willing to dig into the biology of the disease in order to make better drug candidates.” HD has become important for Vertex “because scientifically there’s a good basis of understanding for what causes this disease, the genetics,” Dr. Negulescu said. “We’re taking this seriously as a disease and as an early-stage research program.”

As in CF and many other diseases, scientists believe that malformed, or “misfolded,” proteins are the culprit in Huntington’s.

Vertex researchers are trying to observe whether misfolding occurs in HD and to what extent.

They are also looking for ways to reduce the amount of the huntingtin protein in cells. They have already made some progress on this front, but they must also find a way for a drug to differentiate between normal and mutant huntingtin. Ideally, the drug would reduce the effects of mutant huntingtin while leaving normal huntingtin alone or only minimally affected.

Huntingtin exists throughout the body and is essential for life, although scientists have yet to understand exactly what it does. Part of Vertex’s work is to help unveil that mystery.

“The CF program gave us confidence that a small molecule can affect the fate of the genetically impaired protein, to have it do what it’s supposed to do,” said Dr. Negulescu. “It might be possible to do the same thing with the huntingtin protein.”

On the cutting edge

One of the San Diego unit’s greatest strengths is its expertise in high-throughput screening (HTS), the automated, rapid testing of compounds. HTS allows the researchers to test the effect of hundreds of thousands of compounds on brain cells placed in tiny wells. The CF researchers used HTS to discover VX-770 and VX-809. 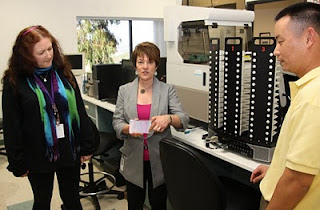 Dr. Hoffman demonstrates the preparation of a plate for use in the high-throughput machine at her left as HD team leaders Dr. Branka Mitrovic and Dr. Mike Liu look on (photo by Gene Veritas).

“We can go to 3,456 wells on a plate,” said Dr. Mike Liu, who heads one of the Vertex teams, of one of the machines. The scientists are observing multiple types of brain cells and the behavior of both normal and mutant huntingtin.

Dr. Negulescu described HTS as “sort of like panning for gold,” but at a very high speed. 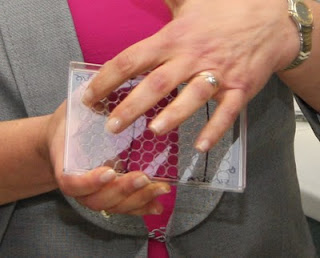 Vertex uses several kinds of HTS devices, including a high-throughput microscope, where scientists can observe the effects of compounds on brain cells.

“What we’re doing is really on the cutting edge of what’s out there in the HD field,” Dr. Liu said.

The San Diego unit stood among the early pioneers of HTS when it was known as Aurora Biosciences in the 1990s. In 2000 the Hereditary Disease Foundation of Los Angeles, which also focuses on HD, contracted with Aurora to do one of the very first high-throughput screenings of compounds for potential treatments in HD (click here to read more). Vertex, which is based in Cambridge, Massachusetts, acquired Aurora in 2001. Vertex was founded in 1989.

Another facet of the HD project involves neurogenesis: the repair of damaged brain cells or the replacement of dead ones with new ones. This research is at an earlier stage than the work on proteins. One approach might involve the stimulation of neural progenitor cells to become brain cells and connect to other brain cells, said Dr. Hoffman.

Dr. Branka Mitrovic leads the second Vertex team, which is examining ways to stimulate the production of growth factors, vital substances for the creation and nourishment of the brain. HD patients suffer from a shortage of such factors. 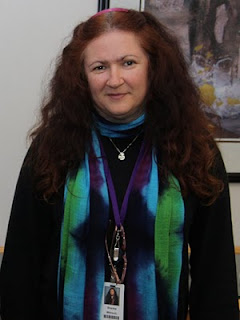 Dr. Branka Mitrovic (photo by Gene Veritas)
Dr. Mitrovic explained that Vertex is using some of the latest research technologies to look for compounds that may enhance the ability of the patient’s brain to self-repair.

In the effort to stop the negative impact of mutant huntingtin, Vertex hopes to find a drug or drugs that will “stop disease before it progresses too far,” Dr. Negulescu said. Such remedies might also prevent asymptomatic gene-positive individuals like me from developing the disease or at least arrest it in its early stages.

Wow! Gives me HUGE hope! Thank you so very much for this.. God bless you!