Some reflections on being named 'HDSA Person of the Year'

With a feeling of great humility and immense responsibility I received the news that the Huntington’s Disease Society of America (HDSA), at its national convention on June 25 in Minneapolis, had named me the 2011 HDSA Person of the Year.

As I wrote here on June 21, I was excited about attending an HDSA convention for the very first time. Alas, that same day I came down with a fever and nasty sinus infection and could not travel.

I did not know about the award. At home recovering, I happened to check e-mail on the night of the 25th. I was stunned! Several messages stated that I was receiving the award and that the announcement prompted a standing ovation. (A record 1,000-plus people attended the convention.)

Don Barr, the chairman of the HDSA Board of Trustees, and Louise Vetter, CEO, presented the plaque, accepted in my absence by trustee Rob Millum, my friend and also a member of the HDSA-San Diego board.

An award for inspiration

HDSA gives this award “to someone who has been an inspiration to others,” Barr told the audience at the HDSA closing ceremony. He noted my work as a member of the HDSA-San Diego board, gene-positive blogger, stem-cell research advocate, and speaker at biotech companies. 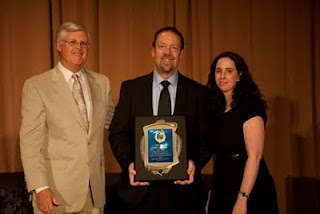 Above, Don Barr (left), Rob Millum, and Louise Vetter with my plaque (photo by Ashley Miller). Below, a detail of the plaque (click on image to see larger view) (photo by Gene Veritas). 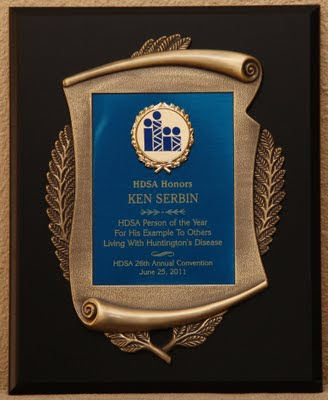 Barr stated that I had “given a face to this often faceless disease” and “inspired countless individuals who are at risk or gene-positive to express themselves without fear and to let them know that they are not alone in the face of HD.”

For those who fight

Shana Martin, the HD activist, top athlete, and model, posted a note of congratulations on my Facebook page, as did friends and acquaintances in the HD community.

“I am stunned and flattered to receive this recognition, and sad that, because of illness, I could not attend the convention,” I responded to these notes. “I want to remember my mom Carol, who died of HD in 2006, and my ‘HD warrior’ father Paul, her caregiver, who died in 2009. The honor is for the battle they fought – and for the battle that our entire community fights each day.”

On that night, I deeply missed Mom and Dad. They would have been proud of me. I felt sorrow that the collective efforts of HDSA, researchers, and advocates like me had not produced a treatment in time to save Mom, who died at the age of 68 after battling HD for more than 15 years. 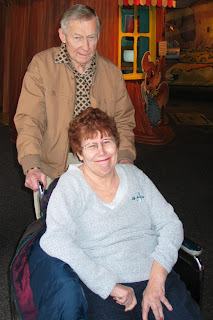 My parents, Paul and Carol, in January of 2004 (photo by Gene Veritas)

I know, too, that this award is not just for me, but for everybody affected by HD: the at-risk, the gene-positive, the symptomatic, the families, and the unsung heroes of America, the caregivers.

And I have huge shoes to fill in the HDSA Person of the Year tradition, which stretches back more than ten years.

For me, the Person of the Year Award is not an endpoint, but a new jumping off point.

As Don Barr noted in making the presentation, I long worked behind the scenes for the HD cause. In 2010 and 2011, however, I began exiting the “HD closet” by giving several speeches, going on the radio, and posting videos of myself on the web.

I hope to use the award’s prestige to build even greater awareness about HD and to encourage the research community to redouble its efforts in the search for treatments and a cure.

I especially hope that I can use this award to combat the stigma surrounding HD and other neurological diseases.

I’ve reached a stage in the cause, and in my life as a gene-positive person, when I must exercise leadership.

I must get back in the HD trenches to continue my fight as before. I cannot shy away from new challenges such as the need to help prepare the HD community for potential clinical trials for the possible drugs now in development in labs. (On July 30, I’ll be speaking on this topic at an HDSA symposium in Seattle.) 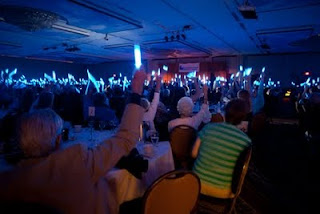 Convention participants at the closing ceremony (photo by Ashley Miller)

Leadership takes place on many levels and in many venues of life: family, work, community, religious organization, advocacy, and politics.

Everybody can lead in his or her own unique way. All of us in the HD community must play our part to strengthen our movement.

I’ll be with you, shoulder-to-shoulder, as we work for better care and seek the cure.
Posted by Gene Veritas at 4:54 PM

I'm so incredibly happy that the HDSA and Communities have acknowledged not only your journey but the efforts to reach out and help others to see a very human side to a wonderful human being. I read your blogs and have on occasion, had the priveledge to share thoughts back and forth with you, and one thing that has stayed with me is that we are in this together. I feel the pulse of the stories from your heart, and I commend you for stepping outside of the personal realm of your journey to reflect and share your findings. It is truly my pleasure to know you, and share our journeys of HOPE with the world. God bless you and yours,

Congratulations, Gene (and Ken)! You write that you'll be with us, shoulder to shoulder. Know that those of us who read and discuss your blog are with you, too. Because of your inspiration, I know that I will try to play a bigger role in the HD community.

You sound like an incredible person, and your work in the HD community is astounding. I do not have HD but I do have another rare disease - cystinosis - that shares a treatment with HD (the medication Cystagon). We are working hard within our community to use adult stem cells for a cure. There are new treatments on the horizon for all of us - here's to the hope that they are implemented sooner rather than later.

Well deserved, my friend! Congratulations. I am always in awe at how some of the most challenging and tragic circumstances bring out the best in some very special people. Your leadership and courage is a great source of strength, hope, and the silver lining in our lives for the rest of us.
With much love,

Congratulations! I wish you could have been there to receive the award in person. It would have been nice to meet the man behind these writings of course. Better luck next year and I hope you are feeling better.

Congratulations on this much deserved award!!!