Game-changers in the fight against disease: a report from the World Stem Cell Summit

With a growing array of possibilities, stem cell treatments for diseases and other medical conditions hold the potential for a new era in human health.

That upbeat message – including a report on Huntington’s disease research – dominated the 2013 World Stem Summit, held in my home city of San Diego last December 4-6. I attended the sixth annual summit as an advocate for the Huntington’s Disease Society of America (HDSA).

“Over the next 20 years we need the brightest young minds using all the platforms of technology to drive creativity for solutions to defeat the problems of disease using stem cells,” said Alan Trounson, Ph.D., the outgoing president of the California Institute for Regenerative Medicine (CIRM), during his keynote address. “If we do that, I’m sure we’re going to be successful.” CIRM, a state-run research funding agency, is spending a voter-approved $3 billion by 2017 to explore stem-cell treatments for various diseases.

“All of us nationally and internationally involved in stem cell research firmly believe that some of these things will work out,” Jonathan Thomas, Ph.D., J.D., the chair of the CIRM oversight board, said at a CIRM public forum. “The great thing about this field is everything’s a game changer. So whatever any of these terrific scientists are able to get through to fruition will literally change the world when it comes to that particular disease or condition. Therein lies the promise of stem cell research.”

You can watch the Trounson and Thomas speeches, as well as other presentations, in my stem cell summit album by clicking here.

‘Cell sheets’ for eyes and hearts

From AIDS to cancer to urinary incontinence, researchers presented exciting advances in stem cell research and the efforts to improve people’s health.

In one of the most striking presentations, Teruo Okano, Ph.D., of Tokyo Women’s Medical University, demonstrated his “cell harvesting” technique to create “cell sheets” of particular kinds of tissue. He has transplanted these sheets onto diseased eyes, cancerous esophageal tissue, and damaged heart muscle.

The small number of patients receiving these experimental treatments has shown dramatic improvement.

Dr. Okano’s team is seeking to employ cell sheets in the treatment of conditions affecting the gums, lungs, liver, pancreas, cartilage, and the middle ear. They are currently seeking to develop a cell sheet-based tissue and organ factory to automate and standardize cell sheet production, aiming to minimize human error and expand the availability of these treatments.

You can watch Dr. Okano’s presentation in the video below.


A Cell Harvesting Method: A Presentation by Dr. Teruo Okano at the 2013 World Stem Cell Summit from Gene Veritas on Vimeo.

Safe cells for an HD trial

On the same panel, Jan Nolta, Ph.D., the director of the Stem Cell Program and Institute for Regenerative Cures at the University of California, Davis, provided an overview of her lab’s work with mesenchymal stem cells (MSCs), which scientists primarily derive from the bone marrow.

“I’ve been working with these cells and have a love affair with them for over 25 years,” Dr. Nolta said. “What we do with them is to genetically engineer them…. They are in clinical trials. They are safe. And they have some really cool properties.”

“We’ve just started the lead-in clinical trial,” Dr. Nolta told the summit audience. “We’ll observe patients for a year, before they would get the cell therapy. We’re recruiting patients at that trial now.”

You can watch Dr. Nolta’s presentation in the video below.

Becoming part of the fabric

Further confirmation of advances in the stem cell field came in the release of a report, Stem Cell Research: Trends and Perspectives on the Evolving International Landscape, which revealed that stem cell research is growing at more than twice the world average for research in general (7% versus 2.9%). The report further noted that about half of stem cell papers refer to “drug development” or “regenerative medicine,” further evidence of the field’s promise for developing treatments.

In the summit’s exhibit hall, scores of scientific posters demonstrated progress on numerous fronts, and displays by stem cell related companies, flanked by expert salespersons, showed how much stem cells are becoming part of the fabric of business.

At the booth for BioSpherix, sales representative Ray Gould explained to me how his company’s product Xvivo System, a small, modular GMP (good manufacturing practices) setup, provides an alternative (for a fraction of the cost) to the large, multi-million-dollar facilities put up by organizations for stem cell and other kinds of research. 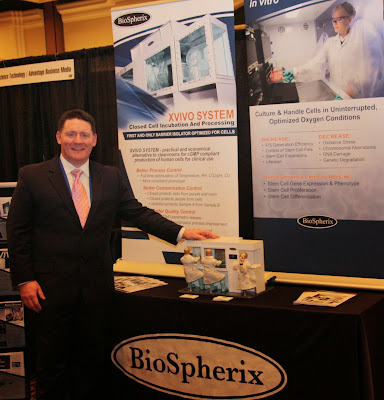 Ray Gould of BioSpherix explains the use of the company's modular GMP system (photo by Gene Veritas).

Fulfilling the promise, understanding the odds

For me, even though I carry the deadly HD gene, the glow of hope from the summit has not worn off.

After the conference, as requested, I started receiving e-mails from the Genetics Policy Institute, which, along with CIRM, was one of the event’s six major sponsors. The messages update the latest developments in stem cell research.

Of the many items, two in particular struck me: a project by the Mayo Clinic to grow stem cells at the International Space Station as a pathway to treatments for stroke and the use of inkjet printing technology to print eye cells to potentially treat retinal disease and help cure blindness.

Although a number of news reports echoed the optimism of the summit (click here for one example), at least one carried the reminder that many attempts at developing stem cell treatments have failed.

Such failures are not surprising. In general, 90 percent of all clinical trials fail to produce a treatment. By their very nature, science and drug discover involve a long process of trial and error.

Stem cells capture our imagination because they come from our bodies. In this respect they differ from typical pharmaceutical agents such as vaccines and medicines, which involve introducing non-human agents into the body (such as dead viruses or chemicals). In addition, as the work of Dr. Nolta and others has demonstrated, stem cell research gives us a greater understanding of the function of the human body.

Stem cells comprise just one part of the toolkit for treating diseases. Despite the likelihood of a high failure rate in clinical trials, having them in the kit along with gene therapy and numerous other approaches increases the overall chances of discovering effective treatments, including Huntington's disease and other currently untreatable neurological disorders.

Next time: the stem cell summit, advocacy, and the future of CIRM.

(Disclaimer: I received a stem cell summit scholarship from CIRM, which covered the cost of registration. CIRM officials did not in any way influence or control what I have written here.)
Posted by Gene Veritas at 11:52 AM

Hi. Do you know if Dr Nolta is recruiting for the stem cell study? Thanks