The Huntington’s disease community sent a powerful message to the U.S. Food and Drug Administration (FDA) at the September 22 meeting on HD patient-focused drug development: the agency must do its utmost to facilitate clinical trials and speed the search for effective treatments.

“We discovered the gene – we don’t have a cure,” declared Nancy Wexler, Ph.D., the famed researcher who initiated the search for the huntingtin gene while watching her mother suffer and ultimately die from HD. She addressed the panel of ten FDA officials and audience of some 200 HD family members and advocates at the agency’s headquarters in Silver Spring, MD. “We did that [discovery] in 1993.”

Along with Wexler, two panels of HD family members selected by the FDA to make presentations about the disease and current lack of effective remedies, as well as other participants in the unusually large meeting, described HD’s cruel devastation and the exhausting burden for caregivers.

The Huntington’s Disease Society of America (HDSA), which advocated for the meeting under the new requirements for patient feedback established by Congress for the FDA, sought to provide the FDA with a more tangible and comprehensive view of HD’s reality, all too familiar to affected families.

The FDA doesn’t conduct drug research, but its regulators must approve all clinical trials and new drugs in the U.S.

The plethora of symptoms

Many presenters and audience commenters emphasized the plethora of cognitive, behavioral, and other symptoms involved in HD in addition to chorea, the involuntary movements traditionally but erroneously labeled the key diagnostic signifier of the disease.

“I have all of the symptoms that have nothing to do with chorea,” stated presenter Julie Rosling, 72, of Orange, CA. Forced to retire some ten years ago from her pharmacist job, Julie participated on the five-person panel about the daily impact of HD.

I first met Julie almost 20 years ago in San Diego at the local HD support group, several years before I tested positive for the genetic defect that causes the disease. At most meetings the group had three breakouts: for the affected, caregivers, and untested individuals and asymptomatic gene carriers. Julie and I participated in this last breakout group. Sharing our most intimate fears about HD, we became friends.

I hadn’t seen Julie in a few years. I had long admired her intelligence, profound knowledge of HD science, and healthy lifestyle. My wife and I viewed Julie as a model for avoiding HD and, once her symptoms started, for living with the disease. She has late-onset HD, in contrast with most patients, who experience onset between 35 and 55. 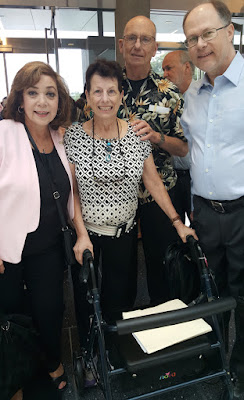 At the FDA meeting, I was shocked and saddened to see how the disease had, as Julie put it in her presentation, greatly affected her demeanor.

“There are so many different types of symptoms,” Julie said, adding that HD must no longer be seen as just a brain disease. She described how she can no longer drive, suffers from insomnia and gastrointestinal difficulties, and fears choking, a common problem with HD.

“I fall all the time when I go up and down the stairs,” she continued. “The thing that’s the most important […] is that my symptoms are affecting every system in my body.”

Sadly, HD has robbed Julie of many favorite activities. Each December, Julie, a painter, sent out exquisitely designed holiday cards. Several years ago, she wrote in her holiday card that she could no longer paint the cover for her cards.

Those beautiful cards always brought me a glow of hope. I have missed them.

“I can’t play Chopin on the piano anymore,” Julie said at the FDA. “I can’t walk to the corner and back.”

HD has hampered her social interaction, too, because of her slurred speech.

“My symptoms have never gotten better,” Julie concluded. “They get worse every single day. I am a living example of what this disease is all about.”

Once again, I had looked into the genetic mirror and viewed my own highly probable future decline.

You can watch Julie’s presentation in the video below. To watch other presentations, click here to visit my video album of the meeting.


'I Can't Play Chopin on the Piano Anymore' from Gene Veritas on Vimeo.

FDA ‘blown away’ by turnout

“I think it was a very successful day,” said HDSA CEO Louise Vetter in an interview with me shortly after the meeting. “I’m really pleased with how full the room was, not only from the patient and community side, but also the FDA. They had a full docket of folks who wanted to be in the meeting to listen to the HD community.[…] There were more FDA staff in the room than is typical for a public hearing.”

The FDA’s level of interest demonstrated its “commitment to paving the way for new therapies for HD,” Vetter added. The FDA was “impressed” with the “urgency” and “commitment” of the HD community.

“The FDA was blown away,” she said, adding that the agency at the last minute had to set up a room “three times larger than what they planned.” 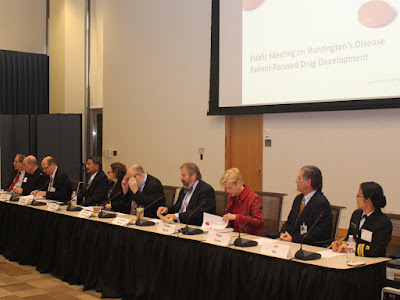 Several dozen HD community members participated in the hearing via webcast. In addition, representatives attended from CHDI Foundation, Inc., the nonprofit virtual biotech focused exclusively on the search for HD therapies, and the pharmaceutical industry.

The HD hearing took place in the morning, followed by a Parkinson’s disease meeting in the afternoon. The FDA had initially combined HD and Parkinson’s concerns into a single event, but HDSA convinced the agency to divide the meeting because of significant differences in the two conditions and the different treatment approaches, Vetter explained.

“We had more people than Parkinson’s had planned, and given the difference in prevalence, the FDA really took notice,” she said.

“I’m just so pleased with how many caregivers and family members really came prepared to succinctly share their stories and open up about the impact of the disease and their hopes and wishes. I know that the FDA heard that.” 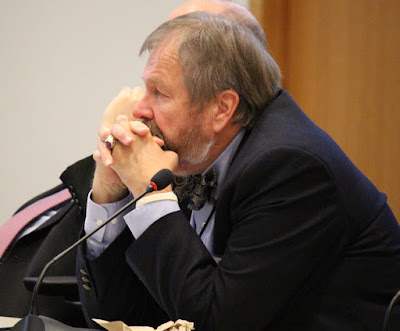 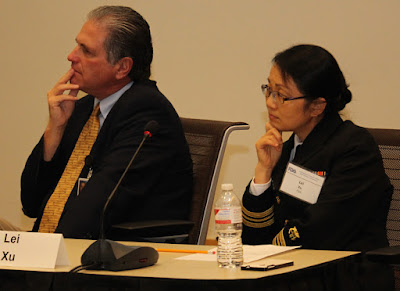 HDSA requested the hearing as soon as the Congressional mandate for patient-focused feedback to the FDA went into effect in 2012. HDSA told the FDA that it could learn much from HD as a genetic disease, given a clearly identified gene and a community of affected families with a serious need for treatments, including preventative remedies for presymptomatic gene carriers, Vetter noted. HDSA also said HD could be a case study for understanding and treating other diseases.

In addition, HDSA will submit to the FDA survey responses from 3,600 HD-affected individuals and family members regarding the impact of symptoms and desired treatments, Vetter noted in her public comments at the hearing.

The public can provide further feedback to the FDA until November 23, 2015, by clicking here.

Several months after the public comment period closes, the FDA will complete a “Voice of the Patient” report on HD, Vetter told me. HDSA will carefully review the report and provide feedback.

You can watch Vetter make her public comments in the video below.

Advocating for the presymptomatic

During my brief remarks (audience members got only two minutes per commentary), I told of my mother’s demise, our daughter’s gene-negative status after testing in the womb, and my luck at remaining presymptomatic at 55, well beyond the point where my mother experienced many symptoms.

“I would like to see a medication that prevents me from ever getting any kind of symptoms,” I said. “There’s got to be a really open dialogue with the scientists on the new areas such as gene-silencing.”

I referred to the disappointment among HD advocates that the first gene-silencing clinical trial for HD, by the Carlsbad, CA-based Isis Pharmaceuticals, Inc., is happening outside the United States. (Phase I of the trial started in July in Europe and Canada; click here to read more.) I remarked that some drug company executives think the FDA too inflexible regarding new approaches. I urged the regulators to consider the new biomarkers (signs of disease and drug efficacy) scientists are seeking to measure in the blood, cerebrospinal fluid, and brain measured with new techniques.

Many presymptomatic people don’t get tested “because of the immense fear of the disease and the fact that there are no treatments,” I added during the final round of comments. “There’s also associated with genetic testing and getting your results a lot of suicidal tendencies.”

I recalled my suicidal fantasies from the early years of my family’s struggle with HD, when I saw my mother declining. Those ended after the birth of my daughter, I added.

“The presymptomatic population out there really needs to be part of the conversation,” I urged.

The urgent need for treatments

The FDA regulators, unsurprisingly, offered little comment on the proceedings; they wanted to listen and learn.

After returning home, on September 25 I requested an interview to follow up on the above-mentioned points, and more, including calls from families with juvenile HD patients for JHD-specific approaches to clinical trials and treatments. I have not yet received a response, but will write an update when I learn more.

However, HDSA CEO Vetter recalled for me the nub of her conversation with William Dunn, M.D., a neurologist and the FDA’s director of the Division of Neurology Products, immediately after the meeting. Dr. Dunn had welcomed the participants at the meeting’s start.

“He’s very committed to this,” Vetter said, referring to the search for HD treatments. “He was very impressed, very grateful for the input of the families, and very committed to making sure that, as therapies move forward to FDA consideration, they will be efficient in their review, that the FDA’s not sitting on anything. The last thing they want to do is be accused of keeping something meaningful out of the hands of families. They’re very committed to being very expeditious and thorough.”

Along with many fellow HD family members, I believe that the FDA gained a clearer understanding of our community’s suffering and the urgent need for treatments.

(Note: HDSA paid for my travel to Silver Spring and a night of lodging. The views expressed in this article are wholly mine.) 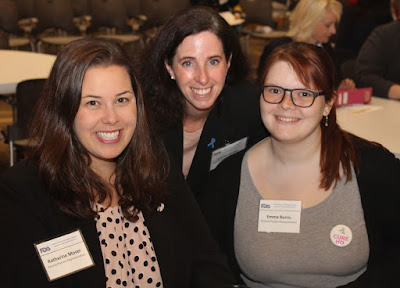 Thanks for posting this!