Pope Francis declares: Huntington’s disease should be ‘hidden no more’

Wow! In a stirring speech at the Vatican transmitted globally, Pope Francis declared to the world on May 18 that Huntington’s disease should be “hidden no more!”

“It is not simply a slogan, so much as a commitment that we all must foster,” the head of the Catholic Church said of the idea embraced by the roughly 1,500 HD family members and supporters gathered at the Paul VI Audience Hall just a few yards from St. Peter’s Square. They had gathered for "HDdennomore: Pope Francis's Special Audience with the Huntington's Disease Community in Solidarity with South America."

“The strength and conviction with which we pronounce these words derive precisely from what Jesus himself taught us,” the pope continued in Italian, as Spanish and English speakers listened to a simultaneous translation on headsets. “Throughout his ministry, he met many sick people; he took on their suffering; he tore down the walls of stigma and of marginalization that prevented so many of them from feeling respected and loved.”

Click here to read the full text of the speech in English.

After the speech, the highly popular and charismatic Pope Francis stopped to greet, hug, kiss, console, and have selfies taken with about 300 HD family members, HD researchers, pharmaceutical company representatives, and dignitaries seated in the front rows of the auditorium.

Overtaken with the pope’s powerful presence, some people cried uncontrollably as he stood before them.

The emotional charge traveled across the crowd. I welled up with tears as he got closer to my family and me in the third row.

After greeting my wife Regina and daughter Bianca and putting his hands on the head of my 78-year-old mother-in-law Lourdes, Pope Francis arrived at my place.

As I had planned, I showed the pope a picture of my mother Carol Serbin and father Paul Serbin, well-dressed and smiling in a formal pose, a photo taken after she had already been diagnosed with HD.

“My mother died of Huntington’s,” I told the Pope in his native tongue of Spanish. “My father cared for her for twenty years.”

I gave Francis a copy of each of my main books on the history of the Church in Brazil, explaining the theme of each with a brief phrase: priestly training and the Church’s struggle against the dictatorship in Brazil. I knew the themes were dear to him as the leader of the world’s Catholic clergy, respected colleague of Brazilian Catholic leaders and their flocks, and untiring proponent of social justice.

Francis said nothing, but he looked me in the eyes.

Somehow, my hands were now firmly holding the pope’s, and I told him: “Many thanks for supporting our community!” 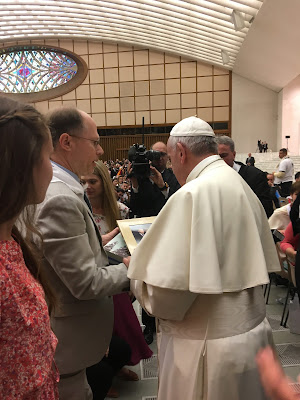 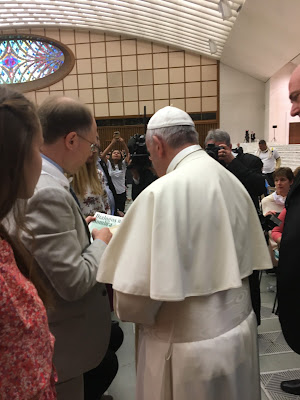 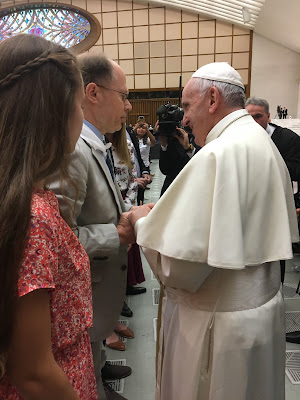 Gene Veritas (aka Kenneth P. Serbin) with Pope Francis, May 18, 2017. In foreground, with back to camera, Bianca Serbin (photos by Regina Serbin).

Then Francis moved on to the next person.

When he finished circulating among the people, Francis returned to the stage, looked back at us and waved, and then exited with his papal entourage.

After listening to some closing music by performers from HD families, we filed out of the auditorium.

As I wrote in a blog note my cell phone, I felt “drunk with excitement” as I left with my family, hugging and taking a selfie with event co-organizer and HD global advocate Charles Sabine, greeting fellow advocates from South America, and at one point becoming disoriented and nearly tumbling to the ground. Regina became concerned that I would injure myself.

We had done it! We had witnessed Pope Francis decisively place Huntington’s disease on the world agenda. 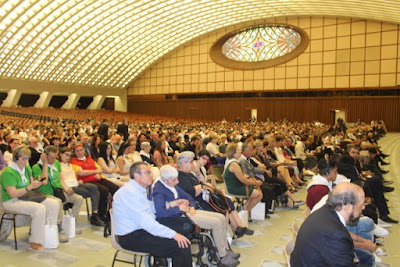 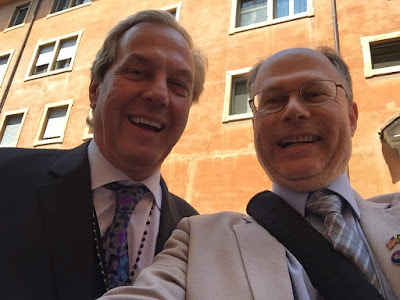 (Click here to watch the audience on the Vatican’s YouTube channel. In my next article I will comment further on Francis’s HD speech and explore in detail the event and its impact.)

(My trip to Rome was made possible by the College of Arts and Sciences, the Frances G. Harpst Center for Catholic Thought and Culture, the International Center, and the Department of History of the University of San Diego. I am grateful for the institutional and moral support of my colleagues and students.)
Posted by Gene Veritas at 5:54 PM