Sharon Shaffer is my Huntington’s disease sister – and my hero.

Afflicted with progressively worse HD symptoms the past 15 years, San Diego area resident Sharon decided to once again attempt the unthinkable for someone heading into the final years of the fatal, incurable disorder: she rowed the equivalent of an aquatic marathon (26.2 miles) on a gym machine in six and a half hours.

The May 10 event, with loved ones and supporters cheering her on, was called “Sharon's Marathon Row for Huntington's Disease Awareness Month.”

Sharon’s feat was captured in a five-minute video titled Magic on Marathon Row, produced by filmmaker Nathan Apffel, who also directed the feature-length documentary The Longest Journey, about the Shaffer nuclear family’s epic battle against Huntington’s. 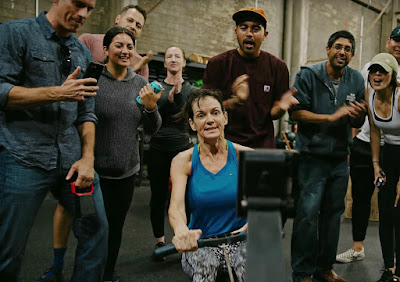 A scene from Magic on Marathon Row

“When disease takes your health and mobility and will take your life, you have a choice,” the video’s overlying text says. “Meet Sharon, a real-life super woman. As Sharon’s body gives out, her determination grows. As her world contracts, her commitment to raising awareness intensifies. As her body breaks down, one thing remains consistent: her determination to fight.”

Sharon’s husband Renato told me in an e-mail that, despite her advanced HD symptoms, she did the "marathon" through “sheer perseverance.”

“It is the only exercise she is able to do without assistance,” he added.

“Sharon, you truly are an inspiration to so many,” wrote E.J. Garner, the chair of the board of the Huntington’s Disease Society of America, in response to my Facebook posting of the video. “Thank you for being such a beautiful example of persistence to fight and bringing awareness to Huntington's disease.”

“She completed a feat only few in the entire world, even healthy and athletic, would not dare approach, let alone finish,” observed LeeJ Razalan, a friend and the owner of Stay Classy CrossFit, the San Diego gym where the event took place. “Sharon's statement in life and in disease will forever ring: we shall overcome and we will finish this together."

Watch Sharon in the video below.

The “marathon” exhausted Sharon. “She could barely move when we got home and took a good three days for full recovery,” Renato explained.

With her family’s help, Sharon has remained one of the most physically active HD-afflicted individuals I have encountered. The highly demanding CrossFit workouts have been one of her favorite activities.

Renato believes that CrossFit delayed Sharon’s need for a wheelchair.

“I also believe the people she worked out with gave her motivation,” he added. “She always looked forward to working out.”

However, Renato also described CrossFit as a “barometer” of HD progression.

In recent years she has become physically weaker, and the involuntary movements caused by HD have increased.

“We have witnessed a rapid decline in the past twelve months,” Renato wrote. “She is no longer able to walk unassisted, and her speech is becoming more labored every day. We have full-time in-home care and are so fortunate they are doing a really great job taking care of her.”

Sharon still exercises, but “it gets more difficult every week,” Renato added.

Renato allowed Sharon to row in the “marathon,” he wrote, because as symptoms worsen, exercise will become impossible. That moment will be "heartbreaking."

I met Sharon about two decades ago at the HDSA-San Diego support group. With others in the breakout group for presymptomatic gene carriers like us and also the untested at-risk, we shared our fears about the disease and its consequences for our children and extended families.

The Shaffers became one of the most active supporters of the cause. Between 2005 and 2015, with Sharon, family members, and others following in support vehicles, Renato and three other riders competed four times in the Race Across America, a non-stop coast-to-coast bicycle race. They always completed the race in fewer than the required eight days.

The Longest Journey documentary chronicles the 2015 race. “In contrast with most presentations of HD I’ve witnessed in the two decades since my mother’s diagnosis for the disorder, this often emotionally wrenching film left me, an HD gene carrier, feeling upbeat,” I wrote in a review of a private screening of the film in 2016 (click here to read more).

The closing words of Sharon’s rowing video ask viewers to learn more about Sharon’s story by watching The Longest Journey. (It’s on Amazon and free to Prime members.)

According to Renato, Amazon statistics reveal that the film has been viewed 200,000 times.

Sadly, I’ve witnessed how HD has overcome Sharon, transforming her from a healthy and vibrant woman into someone now dependent on a wheelchair and the assistance of others.

However, Sharon has demonstrated that, despite the ravages of the "devil of all diseases," the core of her personality has survived.

As we enter the final week of HD Awareness Month, Sharon’s gutsy fight reminds us all that we must not give up in the face of Huntington’s difficult challenges.

For me, Sharon’s devotion to exercise is a cue to spend more time swimming.

At the same time, exercise, although certainly important, has not stopped Sharon’s HD from progressing.

In the HD movement, advocates create moments that capture the essence of the cause.

In defying seemingly insurmountable obstacles, the Shaffers remind us of the immense scientific, financial, political, and social challenges that the HD community faces in seeking to find the first effective treatment – and perhaps even a cure – for a neurological disorder.
Posted by Gene Veritas at 3:34 PM No comments:

As a presymptomatic HD gene carrier who lost his mother to HD in 2006, I kicked off my own participation as a guest May 1 on Help 4 HD International’s podcast Help 4 HD Radio (click here to hear the program.)

I recalled my family’s struggle with HD in an interview with podcast host and HD gene carrier Lauren Holder, the Help 4 HD Radio producer and the 2014 HDSA Person of the Year.

“We need to continue telling our stories,” I said in response to Lauren’s question about how to promote HD Awareness Month, emphasizing the need to attract those unaffected by HD to our cause.

I also highlighted the “real hope” for the first effective HD treatments with clinical trials such as the Ionis-Roche project. These trials are “really unprecedented in the history of HD,” I noted. In the mid-1990s, when my mother was diagnosed, there had been “zero hope,” I recalled.

The next day, I posted HD Awareness Month flyers on my office door at the University of San Diego. 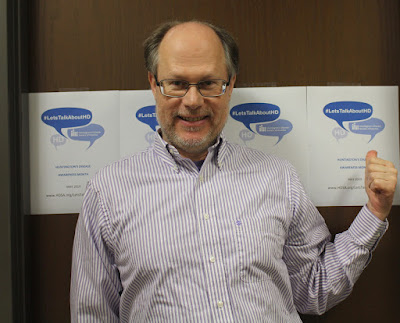 Gene Veritas, aka Kenneth P. Serbin, at his office at the University of San Diego (photo by Yi Sun, Ph.D.)

My conversation with Lauren stirred up painful memories – but also provided fresh insight – about my own path from refusing to talk publicly about HD to exiting the “terrible and lonely HD closet” in 2012 with an essay, “Racing Against the Genetic Clock,” in The Chronicle of Higher Education.

Regarding my “coming out” about HD, Lauren wanted to know: “How did it make you feel? Was the process hard? Did you feel a sense of relief?”

“Deep down, I knew that someday I would need to go public, in some way or another, because it’s very hard to be an advocate without telling people about your story,” I said.

I recounted one poignant dilemma – discussed in public for the first time in the podcast – in the early 2000s. Back then, HDSA-San Diego was joining other chapters around the country in hosting the organization’s first fundraising galas.

“I would volunteer for the galas,” I told Lauren. “I was writing the newsletter that we would distribute at the galas. But I would never tell anybody my story.”

I was known in other San Diego circles for my work as a scholar of Brazil, and once I had given a local public talk on that country.

“I had met this one couple [at my Brazil talk],” I explained to Lauren. “And then, a year or two later, they showed up at one of our galas. So it was like, ‘Wow!’ They were wanting to know what I was doing at this gala here. And I said, ‘Well, this is my personal commitment to charity and making a difference.’

“And I didn’t tell them my story,” I explained. “It’s that kind of situation that was very difficult for me, because I was afraid of being outed, because nobody at my work knew my status. I was worried about losing my job and losing my insurance, and, if I were ever to switch jobs, could I get health insurance again? All of the concerns that people in our community, and other communities, have.

“I really just felt bad that I couldn’t – and wouldn’t at that point – share my story.”

Going public “allowed me to be a much, much better advocate, an honest advocate,” I told Lauren. “I can talk openly about HD and my family situation.”

My essay “Racing Against the Genetic Clock” shocked my colleagues at work and around the country, I recalled.

However, I believed that the article was necessary because I “wanted to take away the fear of talking about Huntington’s disease” for others.

“To this point, I have not, to my knowledge, suffered any discrimination,” I added “And, of course, I’m still asymptomatic. Who knows what will happen if and when I become symptomatic? Things could change.”

However, until now, “I’ve been treated with respect,” I said. Living outside the “HD closet” has “been a very positive experience.”

The prohibition of insurance discrimination for people with pre-existing conditions in the Affordable Care Act and the passage of the Genetic Information Nondiscrimination Act have further encouraged me, I added.

Going public about one’s HD story is a “personal decision,” I observed.

Those unready to tell their stories openly can still participate in #LetsTalkAboutHD by starting with relatives and close friends, I said.

In the HD community, we all have important stories.

As I’ve told Lauren and so many others, “Together we will defeat HD!”

Sadly, HD and juvenile HD patients continue to die. HD Awareness Month provides our community with the opportunity to renew our energies and tell the world of the urgent need for treatments.
Posted by Gene Veritas at 11:55 AM No comments: