In the pandemic, we need to rediscover patience and grasp our responsibility

In this time of pandemic, the virtue of patience is paramount. So is the need to grasp our impact on the history of the planet and its effect on our lives. We who are afflicted with rare diseases have already had to learn many hard life lessons, which apply to the vital efforts to confront the coronavirus.

As we mark Huntington’s Disease Awareness Month, we recall how many in the HD and other neurological and rare disease communities have demonstrated great fortitude and also patience as we await effective treatments. Since learning of my mother’s diagnosis with HD in 1995 and my positive test for the mutation in 1999, I have worried about the inevitable onset of symptoms and yearned for a successful clinical trial to produce a drug to stave off the disease or ameliorate it.

“HD warriors” like my mother and caregiver father (both deceased) have had to confront the disease on a daily basis for a decade or longer.

Drugs like tominersen, the gene-silencing compound now in a historical Phase 3 clinical trial run by Roche, require painstaking development and often well over a decade to reach the market.

The tominersen project began in 2007, and Roche expects to analyze Phase 3 data in 2022. (Tominersen was previously known as RG6042 and, before that, as IONIS-HTTRx.)

The best-case scenarios for an effective and safe COVID-19 vaccine for the general public point to some time in 2021.

“What people don’t realize is that normally vaccine development takes many years, sometimes decades,” Dan Barouch, M.D., a virologist at Beth Israel Deaconess Medical Center in Boston, stated in a news report. “And so trying to compress the whole vaccine process into 12 to 18 months is really unheard-of.”

A vaccine might never be found; after decades of intense research, science still has not developed one for AIDS.

That said, by dint of biomedical progress (but lacking overall preparedness for a pandemic), the current worldwide effort could take place more rapidly than previous drug-development work.

With positive results in the very early stage of its vaccine program, drug maker Moderna, Inc., is using an RNA-based approach to attempt to block the actions of the coronavirus.

Ionis Pharmaceuticals, Inc., the developer of tominersen, is also looking into ways its drug technology “could benefit COVID-19 patients, first by looking at our existing pipeline to see if any clinical or preclinical drugs would have a use in treatment in either the disease, or more likely the complications of the disease arising from the acute respiratory syndrome,” Eric Swayze, Ph.D., the firm’s senior vice president of research, wrote in an e-mail to me on May 8. Ionis designs drugs using antisense oligonucleotides (artificial strands of DNA), a form of gene silencing technology.

“We plan to work with collaborators who have the capability to test our lead ASOs in virus cultures. We believe that our recent pulmonary program advances position us to quickly move forward, provided that our drugs look promising. However, we feel this remains a high-risk discovery project, with many challenges ahead.”

Behind the reaction against lockdowns

However, despite the need for a long-term fight against COVID-19, only a few weeks after lockdowns began, tiny groups of purported “protestors” appeared demanding to “open up” states. They were egged on by President Donald Trump, who has declined to marshal national resources against the virus, and organized by conservative groups.

I have wondered: What if Americans had wanted to give up only three weeks after the 1941 attack on Pearl Harbor?

The initial impatience about COVID-19 was clearly politically motivated. Since then, some criticism of lockdowns results from growing economic hardship: with a 14.7 percent unemployment rate, the U.S. has lost the greatest number of jobs since the Great Depression of the 1930s. In addition, many small business owners have had to curtail their work or even shut down completely.

The pain hits professors and students

The economic pain has hit American universities such as my employer, the University of San Diego (USD), which switched to remote, online instruction in mid-March. Confronting an unexpected deficit, the president has announced a 50 percent cut in retirement benefits and a salary and hiring freeze.

There is no consensus nationally on how to resume classes in the fall, with leaders of different campuses struggling with uncertainty. The nation’s largest public university, California State University, for example, has announced, that its campuses will move nearly all instruction online.

With USD’s dependence on tuition for institutional survival and its reputation for high-quality instruction in relatively small classes in small classrooms, the administration has launched a still inchoate plan to reopen for the fall semester early, in mid-August. According to administrators, because of the loss in student fees, going remote again would extend losses by tens of millions of dollars, forcing possible layoffs and furloughs of some instructors and employees, an increased teaching load for the main faculty, and other types of cutbacks.

Many professors, including myself, fear returning to campus so soon; in normal times, packed dorms, classrooms, and other facilities (and student parties administrators can’t control) provide ideal conditions for a virus to spread. Though young people are less likely to suffer from coronavirus symptoms, some do get serious cases, and asymptomatic people can of course spread the virus to others more vulnerable.

Universities and their employees will seek to implement social distancing, testing for COVID-19, and other measures. Ultimately, depending on the course of the pandemic, many might have to resort again to remote learning.

We cannot return to ‘normal’

In fact, three in four Americans have supported social distancing and wearing masks.

Without good health, we are restricted economically, as the HD community knows so well.

I believe that the impatience comes in part from our culture of instant gratification, epitomized by online shopping and overnight delivery. Another part relates to political orientation, with Republicans favoring a more rapid opening than Democrats (for one analysis, click here).

I think many people – myself included – wrongly thought that, after a month or two of lockdown, we would return to “normal.”

However, as New York Governor  Andrew Cuomo put it on April 1, “I don’t think we get back to normal. We get to a new normal.” As a result of the crisis, society will undergo a “transformation,” and we must assure that it be “positive and not negative,” Cuomo urged.

“I fear that the resumption of normality would signal a failure to learn,” commented Pulitzer-Prize-winning medical writer Siddhartha Mukherjee, M.D. “We need to think not about resumption but about revision.”

He added, with reference to how the drive for instant success has exacerbated the pain of the pandemic: “To what extent did the market-driven, efficiency-obsessed culture of hospital administration contribute to the crisis?”

The perspective of Big History

Cuomo echoed the point that professional historians like me make to students and readers of our books: history is ever-changing, often with great progress, but also devastating setbacks, including world wars, plagues, and inhumane practices like slavery.

I teach a course called “Big History: From Cosmos to Cannibals,” which begins with the start of the universe and ends with the dawn of the modern era: Europeans' conquest of the Americas, beginning in the late 1400s and quickly causing epidemics of Old World diseases in which tens of millions of native Americans died in the hemisphere – a very poignant point of comparison with the pandemic this past semester. A field that has emerged recently, Big History embraces the idea that human development must be understood in the context of physics, biology, evolution, and the transition from small bands of hunter-gatherers to cities with millions of people.

Over the past several years, my classes have focused on how we now live in the Anthropocene, an era in which humans have taken control of the earth’s systems (atmosphere, oceans, land, life, and others).

Human agency has led to global warming, probably a more daunting challenge to humankind than coronaviruses, and many other threatening phenomena.

Human control has contributed to the crisis

In fact, some commentators have asserted that the pandemic has resulted from the humans’ super-control of the earth and our encroachment on the last vestiges of nature in areas such as the Amazon rainforest (for some examples, click here, here, and here).

Deforestation (for cash crops and cattle), mining, a growing population, and the expansion of urban areas have put the environment and the species therein under greater stress, making them more susceptible to viruses and zoonosis (jumping of a virus from one species to another, including humans).

Human domination of the planet has intensified over the past several decades. I witnessed the devastation firsthand of the Amazon in 1988 and 1990, during my time in Brazil as a graduate student. I saw gold prospectors who penetrated the deepest recesses of the forest, using clandestine airstrips. I also viewed up close how many square miles of trees had been cut down. 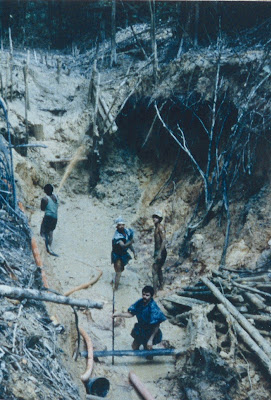 Above, using modern equipment, men prospect for gold by excavating the floor of the Amazon rainforest in Brazil, 1988 (photo by Gene Veritas, aka Kenneth P. Serbin). Below, Gene Veritas (wearing sunglasses) with workers at the mining site (personal photo). 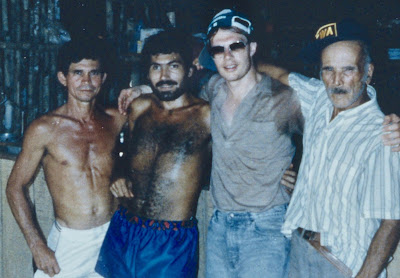 Reconnecting with ourselves, and the planet

In my Big History course just concluded this semester, we were all deeply saddened by the onset of the pandemic. However, in the context of history, a devastating viral outbreak was highly likely. Leading scientists have also warned the world for decades.

The pandemic serves as a global alarm. The Earth is a system, and it is crying out against our dangerous intrusions into rainforests and other attacks on the environment. Ironically, with the decrease in vehicle traffic, the vast reduction in pollution gives us a glimpse of the air quality we once had and must achieve again to stem the tide.

A key lesson of my Big History course is that the modern world led humans to think they were separate from nature, but, in reality, we are ever more interconnected. The pandemic will perhaps force humanity to rediscover our identity (for some, a spirituality) of being one with nature. We are part of the Earth, not over and above it.

As Dr. Mukherjee pointed out, the virus has laid bare many things, such as the inequality of our health system. It has also laid bare our impatience. To overcome the virus, we need to regain patience and, along with it, humility and respect for the planet.

As Dr. Mukherjee and others have urged, we also need to learn from this crisis and make better policy choices for future threats of all types.

(Disclosure: I hold a symbolic amount of Ionis shares.)
Posted by Gene Veritas at 11:27 PM No comments: