Traveling across America, togetherness and memories

Living gene-positive for Huntington’s disease has taught me to value each and every moment of life, from the most humdrum to the most exhilarating.

Like so many people in my position, I have planned for the worst yet tried to live as if it will never happen.

I know that I could very soon follow in the footsteps of my mother, who was reduced by HD to a mere shadow of herself and died in 2006.

But I’ve tried to pack in as much life as possible.

Ever since testing positive for HD in 1999 and taking part in the birth of our HD-free daughter in 2000, I have worried deeply about whether I will see her grow up, graduate from college, and set out on her own life of work and love.

I have been blessed. Whereas my mother probably had the early psychiatric symptoms of HD in her late 40s, I reached my 50th birthday apparently free of the classic symptoms of HD. Still, all the scientific evidence suggests that the genetic defect is already attacking my brain and perhaps causing subtle, almost imperceptible symptoms.

On June 27, the day after my daughter’s tenth birthday, I seized the moment and embarked with my family on a month-long vacation. I wanted to take advantage of my good health by bringing our family closer together and creating lifelong memories for our daughter.

The force of nature

In this day and age of plane travel, we toured America coast to coast by car, just as my parents used to do with my family in the 1960s and early 1970s. (I didn’t ride on a plane until age 18, but my daughter had already flown to Brazil before she turned one!) From San Diego we drove to the Excalibur in Las Vegas, spent a night in Salt Lake City, and then headed to Yellowstone National Park.

At Yellowstone we experienced the beautiful and haunting power of nature within the first few hours. Driving home at dusk after watching the Old Faithful geyser, we saw a grizzly bear crossing a river near the road. 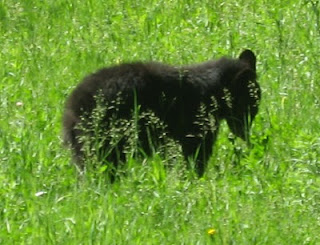 Moments later, driving back to our hotel in West Yellowstone, Montana, flashes of lightning lit up the western sky. It started to rain hard, and then a storm of hail forced us to stop on the shoulder. We feared that our windshield might crack. The car thermometer plummeted from 70 to 45 degrees in just a few minutes.

Once the rain cleared, my daughter couldn’t wait to return to the hotel to write down in her trip journal the assault of nature she had just experienced.

It set the tone for the rest of the trip – a symbol of the vastness and geographical and cultural diversity of our great country.

After Yellowstone we ate trout caught by my daughter and Huntington’s Disease Society of America (HDSA) national board member Rob Millum at his pond in Buffalo, Wyoming; witnessed the majesty of Mount Rushmore, the Crazy Horse Memorial, and Wind Cave National Park in South Dakota; saw cheese-making at Decatur Dairy in Brodhead, Wisconsin; visited Notre Dame and Yale, two of America’s leading universities; spent several relaxing days at a college friend’s home on Nantucket; ate coal oven pizza in Greenwich Village with another college friend; and viewed the Liberty Bell and Independence Hall in Philadelphia. 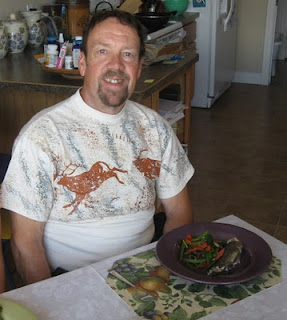 
We also saw the spectacular museums and public buildings and monuments of our nation’s capital; experienced the wisdom and ingenuity of Thomas Jefferson’s Monticello in Virginia; learned, in a visit to Memphis, about the deep impact on our land of Elvis Presley and Martin Luther King Junior; strolled through the artful town of Santa Fe, New Mexico; visited the site of the construction of the first nuclear bomb at nearby Los Alamos; and, as a grand finale, took in the Grand Canyon.

Along the way we enjoyed many dishes new to both my daughter and my wife, who is Brazilian: Wyoming buffalo meat, New Haven pizza, Philly cheese steaks, Memphis barbecue, and New Mexican cuisine. 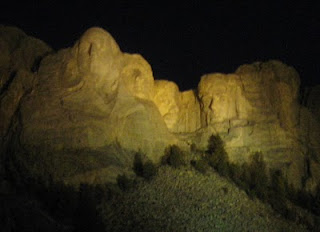 Mount Rushmore the night of July 4 (photo by Gene Veritas)

During much of the trip we renewed ties with old friends and family members who graciously opened their doors and cooked us wonderful meals, a welcome break from hotels and the fast food we ate during 500-mile days on the highway.

A break from HD

We logged 8,300 miles in 32 days. The pace was hectic but exhilarating.

Throughout most of the trip I simply forgot about Huntington’s disease. As a fellow HDSA-San Diego board member put it, I deserved this vacation! From late 2008, when we began revamping our chapter website, until this past June I have blogged a couple times per month, put out several chapter e-newsletters, attended the CHDI (unofficially known as the Cure Huntington’s Disease Initiative) conference in Palm Springs, and worked in a range of other chapter activities.

In the midst of all this, in September 2009, my father, the Huntington’s disease warrior who cared for my mother for fifteen 15 years, died just a few days before his 82nd birthday.

For those 32 days I barely glanced at e-mail.

When the subject of HD came up, we didn’t flee. In my home state of Ohio my wife and I recalled with my cousin and his wife my parents’ struggle with HD and the disease’s big part in our decision to have only one child.

In New Haven an old college friend asked me how I was doing health-wise, and I explained to him that I had now gone beyond the age of my mother’s apparent onset.

Indeed, I felt deeply privileged to be able to take the trip. It was truly a joyful month!

From “pseudonymous” to going public

During dinner at the Nantucket home of Robi Blumenstein, the President of CHDI Management, Inc., the topic of HD naturally came up. As always, it was good to hear Robi speak of the latest progress in the search for treatments and a cure.

I spoke openly about this blog, mentioning the fact that I use a “pseudonym.” My daughter, who was sitting next to me, had recently read the three children’s books by “Pseudonymous Bosch,” known as the Secret Series. Shocked, she asked, “Are you Pseudonymous?!”

No, I explained, I wasn’t. But I let her take in everything about the blog as I resumed the conversation with Robi and the other guests. For the first time, she learned that I blog about HD. Surely and steadily she is learning more about her father’s own long-held secret and witnessing how I am going public about it. (Click here to read more.)

As I put down the first notes for this entry after our arrival in San Diego on July 28, I told myself: “mission accomplished!” I had planned this trip since summer 2009. We reached all of our goals and kept on schedule, with no flat tires or major car emergencies. We managed to keep good humor in close quarters, and our daughter showed great patience as she spent long hours in the back seat far from home, beloved pet dog, and friends. 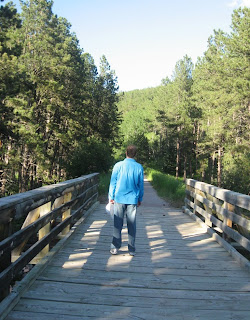 Gene on the Mickelson Trail in South Dakota (family photo).

Traveling through our great country and showing it to my family – including many places that I myself saw for the first time – left me with a sense of the grandness of our land, our planet, and, indeed, our universe. We felt part of it all, from the storm and the bears in Yellowstone to the peaceful and secluded shoreline of Nantucket to the bustling floors of the U.S. Capitol in Washington, D.C. We’re not just in America. We’re of America.

We were just one small family among millions enjoying their summer vacations. But for us this was an extra special vacation, one that I hope will always be a reference point for our daughter, no matter what the outcome of my situation as a person gene-positive for Huntington’s disease.
Posted by Gene Veritas at 8:06 PM

Congrats. As the spouse of an HD patient (victim) and the father of 2 at risk kids, we head to Jackson Hole on Thursday. It will probably be our last trip of its kind. Bittersweet but fortunate to ahve the opportunity to get away. I'll look for your bear!

Good for you for letting your HD-status propel you to take in the sweetness of life and enjoy that for all of us, time is not unlimited, and seizing that time is of the utmost importance.

To encourage you once again, my HD-positive mother has 41 repeats, is 59 years old, and just passed the re-test for her medical genetics boards.

At a recently discovered 40 repeats, and 32 years old, I am hopeful my future will be long and rich with countless amazing moments, but at the same time I'm not waiting until tomorrow to make those memories.

Cheers to hoping and living simultaneously.