Pope Benedict XVI’s resignation: a witness to aging, a signal for a new bioethics

Undoubtedly, history will most remember Pope Benedict XVI not for any accomplishment or lack thereof, but for his courageous and humble decision to become the first head of the Roman Catholic Church to abdicate in seven centuries – and only the fifth in 2,000 years of Catholicism.

One cannot fail to be moved by the 85-year-old leader’s recognition that he no longer possesses sufficient “strength of mind and body,” leaving him unable “to adequately fulfill the ministry entrusted to me.”

He made the announcement on February 11. He will leave his post on February 28. Shortly thereafter, a conclave of cardinals, the top leaders of the Church, will meet to select a new pope from among themselves.

Benedict XVI’s resignation is a witness to aging and human mortality.

No matter what our beliefs about religion, this simple but profound action gives us pause to reflect on how we can accept our own human limitations.

For the Huntington’s disease community, it also provides an opportunity to recall the ethical, social, and spiritual dimensions of our collective struggle.

Turning over the keys

In a world with many governments and institutions ruled by old men unwilling to release their grip on power, Benedict XVI has voluntarily relinquished control of the Church – the epitome of male dominance – to go live in a building that has until now served as a cloistered convent. 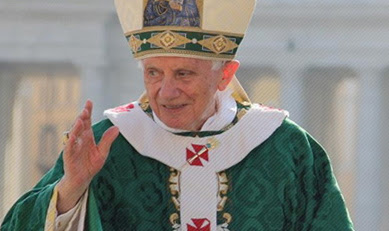 In a global, image-conscious youth culture offering plastic surgery and hair implants to the middle-aged and elderly, Benedict XVI has said that it’s okay to age.

Many elderly people resist giving up freedoms such as the pleasurable and powerful experience of driving a car until an adult child worried about safety takes away the keys or gets a court order to declare the parent incompetent.

Benedict has turned in the keys on his own, saving others from potentially embarrassing and even dangerous predicaments and opening the door to potentially more youthful leadership in greater tune with today’s world.

According to the New Testament of The Bible, Jesus gave the Apostle Peter the keys to the Kingdom of Heaven. The historical successor to Peter, Benedict XVI will pass on those spiritual keys to a new pope, another illustration of the profound humility of his abdication.

Each day, HD-affected people and their caregivers strive together to strike a balance between the individual patient’s desires and the need for proper care. We, too, face the terrible burden of wondering about the right moment for the caregiver to take over the keys.

Gene-positive, asymptomatic people like me and those with early symptoms wonder how long we can hold onto our keys, and we worry greatly about burdening our families.

Ultimately, those keys represent our lives and our hopes for a peaceful death and the possibility of a hereafter – a place without the suffering of Huntington's disease.

Rather than leave the world the spectacle of a pope struggling to hold onto the reins of power while ensconced in the palatial papal dwellings, Benedict XVI may instead ultimately provide the world the image of a retired pope hospitalized or sheltered in what could effectively become a nursing home, with caregivers assisting him with basic needs.

If Benedict XVI develops or already has Alzheimer’s or some other neurodegenerative disorder, rather than be hidden behind a Vatican bureaucracy nervous about a transition of power and the Church’s image, his condition will become known to the world.

His predecessor, Pope John Paul II, suffered from Parkinson’s disease. Despite his symptoms, John Paul II kept up his busy schedule of trips and public appearances. He also advocated for greater research towards a cure.

The HD community has long understood the similarities between the frailties caused by Huntington’s and those of Alzheimer’s, Parkinson’s, and other disorders. We can stand with Benedict XVI as he faces the possibility of his own neurodegenerative symptoms, and we will continue to advocate for remedies for HD, still untreatable but the focus of intense research efforts.

The social impact of Huntington’s disease and the efforts to understand and treat it have thrust our community into the forefront of the biotechnological revolution.

As I recently wrote, “The story of Huntington's is the story of our time. Huntington's was one of the very first diseases for which a genetic test was developed. As knowledge increases about numerous other health risks, medical ethics must undergo profound revision, and a genetic-rights movement must arise. To borrow one scholar's phrase, disease-gene carriers like me are ‘moral pioneers’ on the genetic frontier.”

Benedict XVI’s witness to aging and mortality comes at a time when the Church hierarchy, Catholic believers, and society in general have struggled mightily with other life-and-death issues such as birth control, abortion, embryonic stem cell research, and mercy killing.

Benedict XVI shored up traditional Church teachings on these matters, but he also belonged to a generation of Church thinkers faced with the challenge of formulating a system of Catholic bioethics to meet both the ever-expanding promise and dangers of the biotechnological era.

Thus, Benedict’s witness to aging could help the Church forge ahead with a carefully conceived and balanced bioethics.

By suddenly opening up the Church to the selection of a new pope, Benedict XVI has created potential space for new ideas regarding bioethics.

If a pope can humbly resign, perhaps the Church can humbly admit the need for greater flexibility.

Vatican II brought the Church into the modern world by carrying out the most sweeping reforms in the history of Catholicism. Those reforms included the end of the universal Latin Mass (in favor of the Liturgy in local languages), initiation of dialogue with other religions as well as with antagonistic political creeds such as Marxism, and greater participation by laypersons in the Mass and administration of the Church.

Vatican II responded to a great malaise in the Church in the 1950s caused by censorship of innovative ideas and an exaggerated dependence on tradition and ecclesiastical authoritarianism. Today a similar malaise – created by the current sex-abuse scandals and cover-ups involving priests, bishops, and even cardinals – plagues the Church.

In the late 1960s, powered by the energy of Vatican II, the Church seemed on the rebound.

As is well known, Benedict XVI worked hard to contain and even reverse the trends unleashed by Vatican II.

However, unlike the 1960s, when so much seemed possible for the Church, today the institution suffers from a crisis of credibility.

Liberal Catholics like me have again begun to urge that the Church call for a Vatican III to address such issues as the sex-abuse scandal and the ordination of women (for another example, click here). The Church also needs reform on issues such as obligatory priestly celibacy, the ordination of married men, and hypocrisy about homosexuality in an institution with large numbers of mainly closeted gay clergy.

A Vatican III was virtually impossible under Benedict XVI as active pope. However, his radical departure into retirement has now made a council possible. It may not matter if the new pope is another conservative, because Benedict XVI’s powerfully symbolic resignation, his witness to aging, has signaled to the leadership that it can and should explore new avenues, new modes of action.

Bioethics could and should become the centerpiece of a Vatican III.

As the Church clamored for peace and social justice in the 1960s, today it can take a new and invigorating leadership role in helping the world adapt to the challenges of the genome, the environment, new forms of human relationship, and the immense caregiving burden created by science and medicine’s ability to prolong the life of the body ahead of the mind.

In its long and often wise history the Church has evolved gradually and deliberately. It can now begin to embrace the postmodern world.

We in the HD have also born witness – to immense suffering, to an ambitious scientific effort to improve the lives of people through the search for treatments and cures, and to hope. We have much of our own wisdom to offer the Catholic Church, and the world, in the quest for a new bioethics.

(A similar version of this article appeared today in Portuguese in the Brazilian newspaper O Estado de S. Paulo.)
Posted by Gene Veritas at 2:09 PM