With her indomitable spirit Sharon Shaffer has not given up the fight against Huntington’s disease, despite a decade of struggling with symptoms that forced her to quit her job and stop driving, and which hamper her ability to speak.

On December 7, Sharon starred in her own HD educational fundraiser, “Sharing Sharon’s CrossFit Journey” (#CureHuntingtons and #SharingSharonsJourney). The event raised nearly $2,000 to support Sharon and her family’s plans to hold a much larger fundraiser for the Huntington’s Disease Society of America (HDSA).

More importantly, it gave several dozen participants and onlookers in the CrossFit gym insight into Sharon’s practice of regular, intense exercise as a strategy for slowing the inevitable progression of her untreatable condition.

“I believe that CrossFit has helped me bounce back from major falls and accidents that I have had,” Sharon, assisted by daughter Alexa, said in a speech before CrossFit trainers led her and participants through a regimen of exercises. “Although my balance, swallowing, and speech are worsening, I am confident that without exercise my symptoms would be worse.”

You can watch Sharon tell of her struggles with HD and her involvement with CrossFit in the video below, with an introduction by Lee Razalan, the owner of Stay Classy CrossFit, the gym that sponsored the event.

The trainers at Stay Classy CrossFit, a central San Diego outlet that is part of a national network of gyms, designed a program for the Shaffers’ event. It was geared specifically for HD-affected individuals.

Along with the other participants, I jumped on a box, lifted weights, swung on a pull-up bar, and did pushups and squats.

We rotated among the five exercise stations every 90 seconds, moving through the entire sequence three times over about 17 minutes. 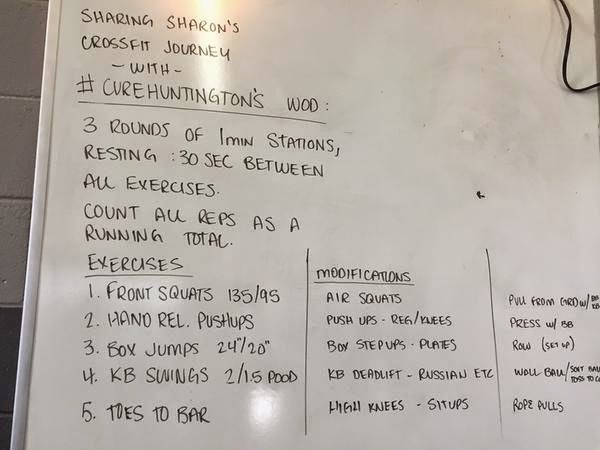 The #CureHuntingtons WOD (workout of the day) (photo by Taylor Shaffer)

I found the workout very rigorous. Indeed, I had to stop several times to catch my breath.

Over the next couple of days, my muscles felt considerably sore. But it was a good soreness, the kind you get from using neglected muscles. Today one of my doctors gave me the go-ahead to stick with CrossFit, but only as long as I don’t overdo it.

It occurred to me that HD people and presymptomatic gene carriers such as I need more events such as this to help us refocus on exercise and holistic approaches to the disease.

For Sharon, CrossFit has not just served to stimulate her brain and strengthen her muscles, but also linked her to a whole new network of friends who literally support her as she sometimes stumbles through the exercises.

In addition to Stay Classy Crossfit, the event received support from Lululemon and Sushi on a Roll.

You can watch the CrossFit participants, including me, in the videos below.

The Shaffers put on “Sharing Sharon’s CrossFit Journey” in preparation for their fourth participation in the Race Across America (RAAM), a coast-to-coast, non-stop bicycle race from the pier in Oceanside, CA, to the boardwalk in Annapolis, MD. The Shaffers’ participation in the June 2015 event requires donations in kind and funds to cover such costs as a motor home to accompany the riders.

These and affiliated events such as annual RAAM golf tournaments have raised more than $110,000 for HDSA. “Team 2 Cure HD” has also increased awareness about HD across the nation.

In addition to Renato, the 2015 team includes RAAM veterans John Sylvester and Jason Tate and newcomer Mikel Clementi. Their 2015 goal is to net $40,000 or more. 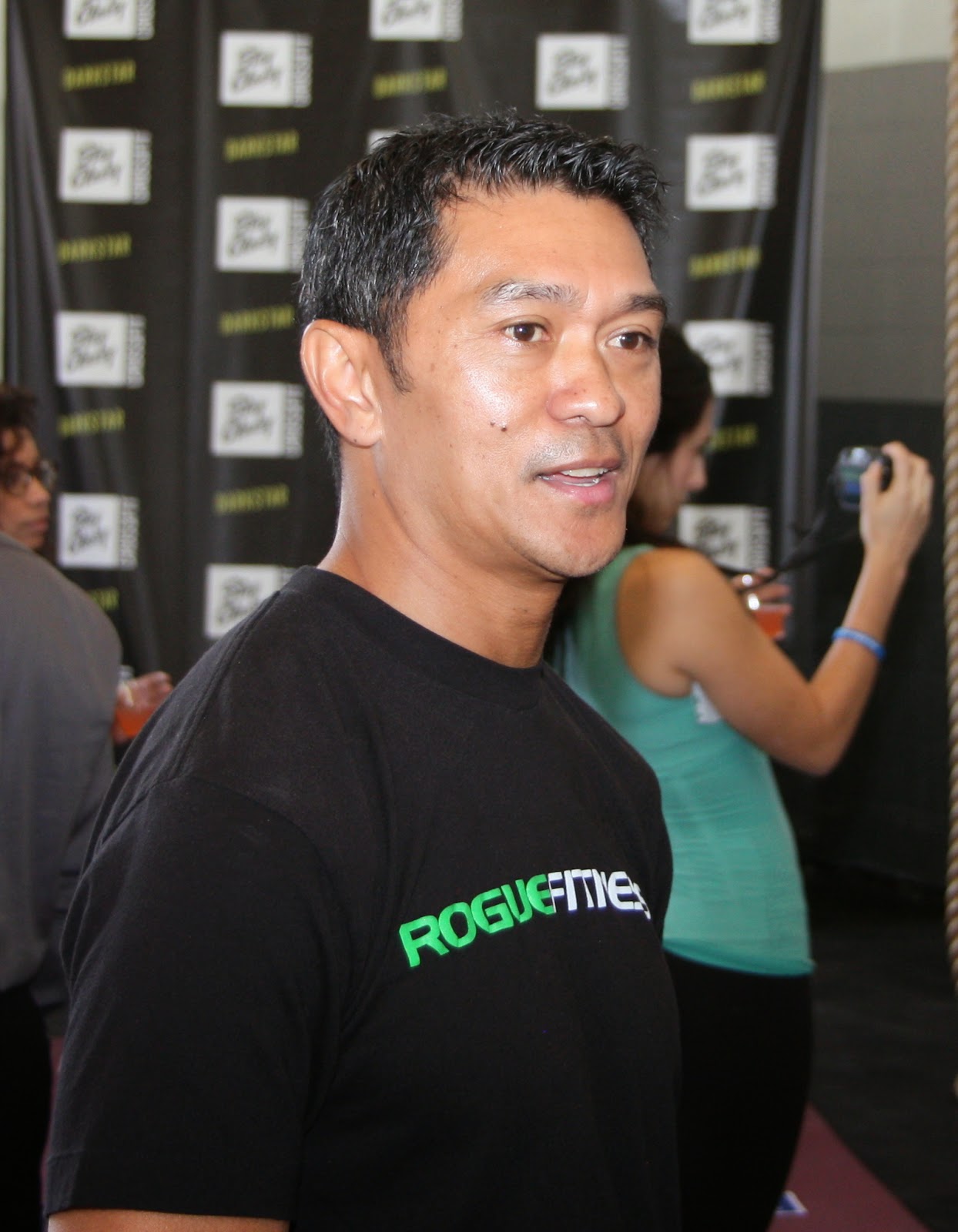 Renato and his three team members have completed past RAAM events in less than ten days. To call RAAM grueling is a gross understatement, especially since Renato turns 50 today, December 9.

In their RAAM donation request letter, the Shaffers describe the race as “both physically and emotionally taxing” but that pales before “the realities that HD patients suffer from on a daily basis. Over the past ten years our family has changed drastically with the progression of Sharon’s symptoms. Nonetheless we live with purpose, hope and gratitude. Our purpose is to shed light on HD, to maintain realistic hope despite Sharon’s circumstances and always remain grateful for the selflessness of others who have helped us.”

Renato, the RAAM team members and support staff, the extended Shaffer family, and supporters and friends of the HD cause draw deep inspiration from Sharon.

“My goal […] is to try to succeed at things that people would deem impossible given my condition,” said the 48-year-old Sharon, who has practiced CrossFit for five years. She believes that all HD-affected individuals can discover an activity or hobby for keeping active.

“Huntington’s does not define us,” she said. “It’s just another fork in the road.”

At the conclusion of the CrossFit program, we participants all gathered around Sharon and one of the trainers as he reflected on the purpose and the lessons gained.

I touched Sharon’s shoulder. She and her thoughtful event for HD families had motivated me to recommit to exercise and healthy living as I face my own inevitable onset. Once again, I acquired strength from my HD sister.

We all put our arms in the middle of the circle. Then we raised them as we cheered: “Cure Huntington’s!”

(Stay tuned to this blog for updates on RAAM 2015 and how you can help. Scroll down for other photos from Sharon's event. Photos by Gene Veritas.) 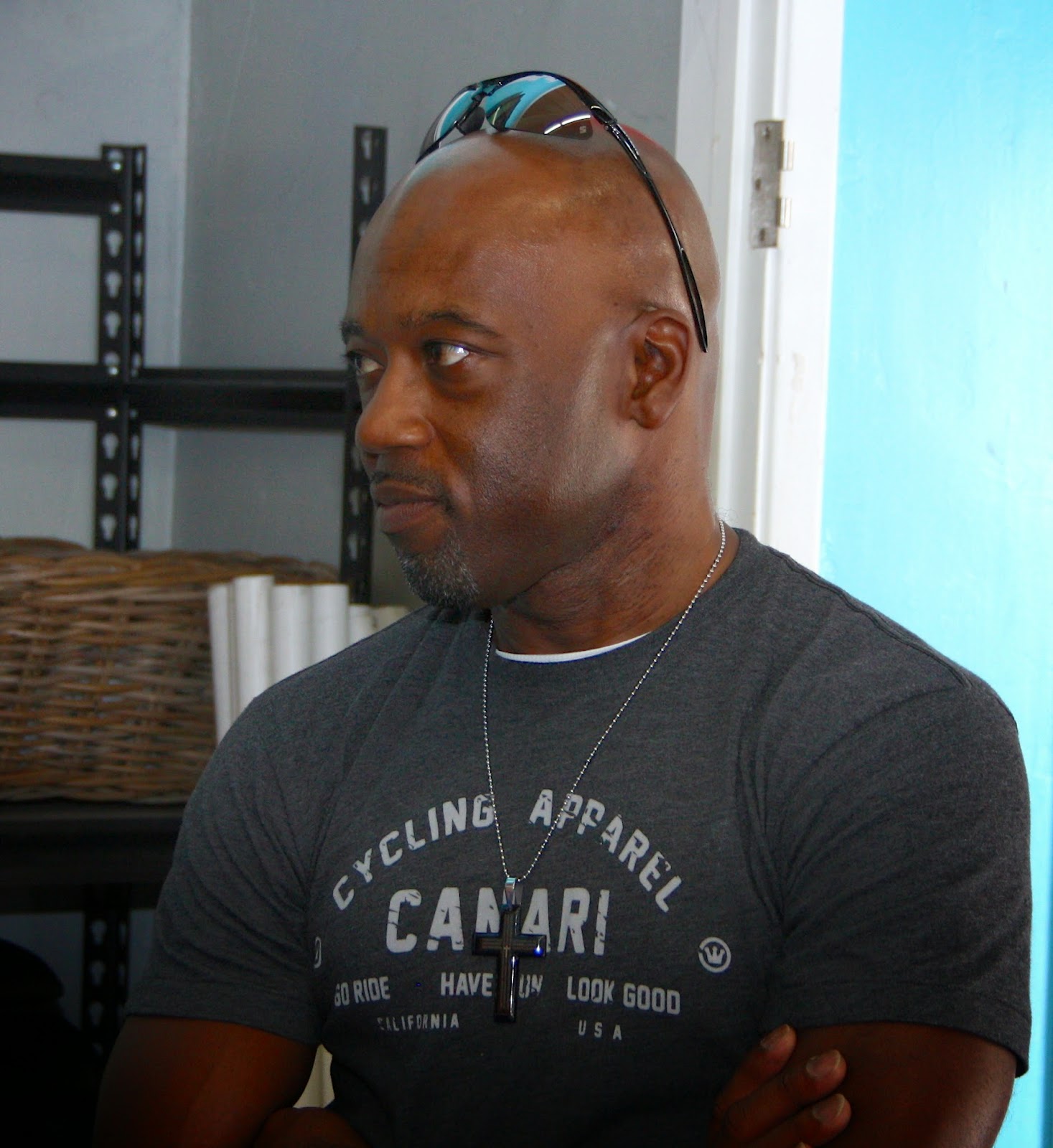 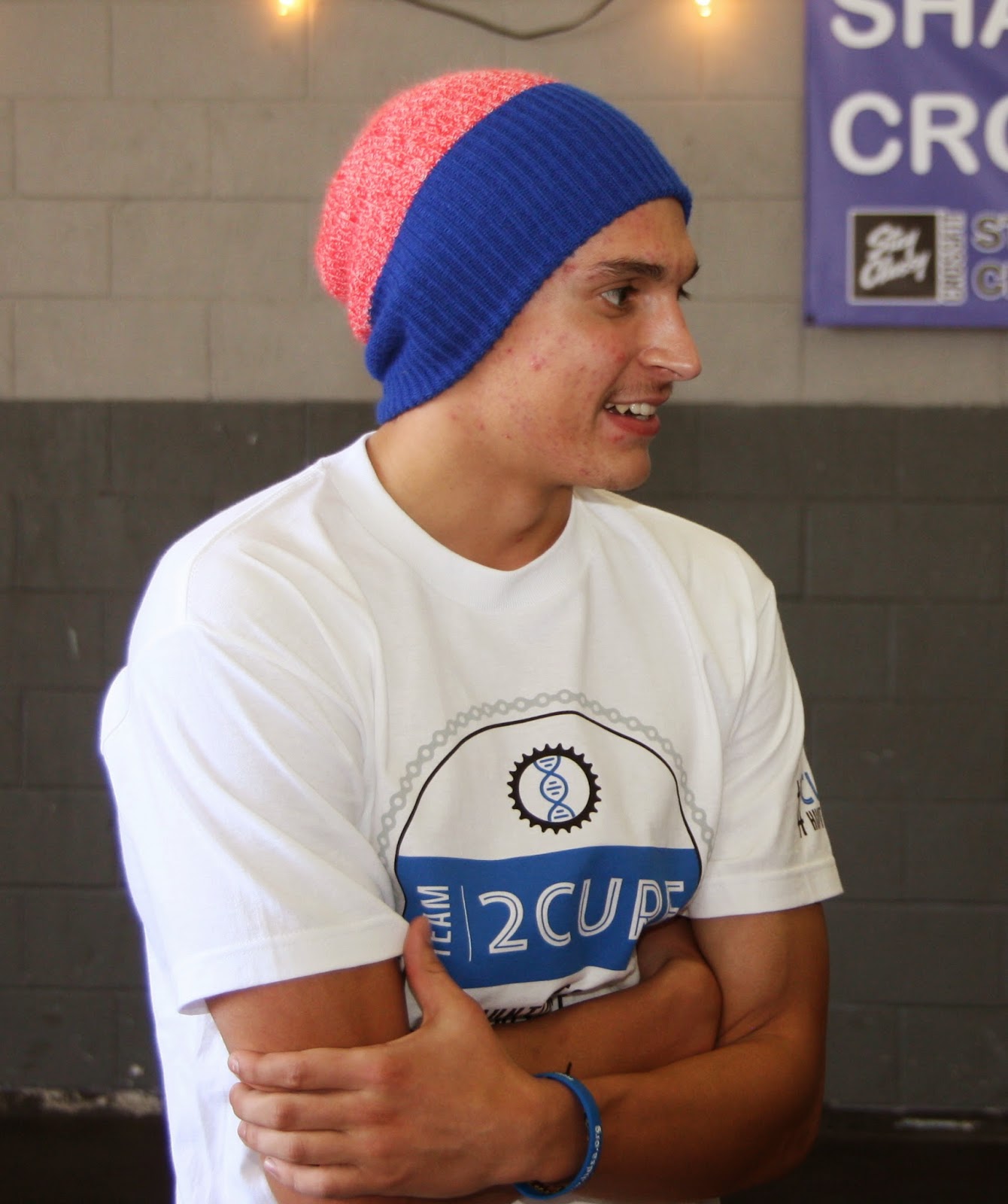 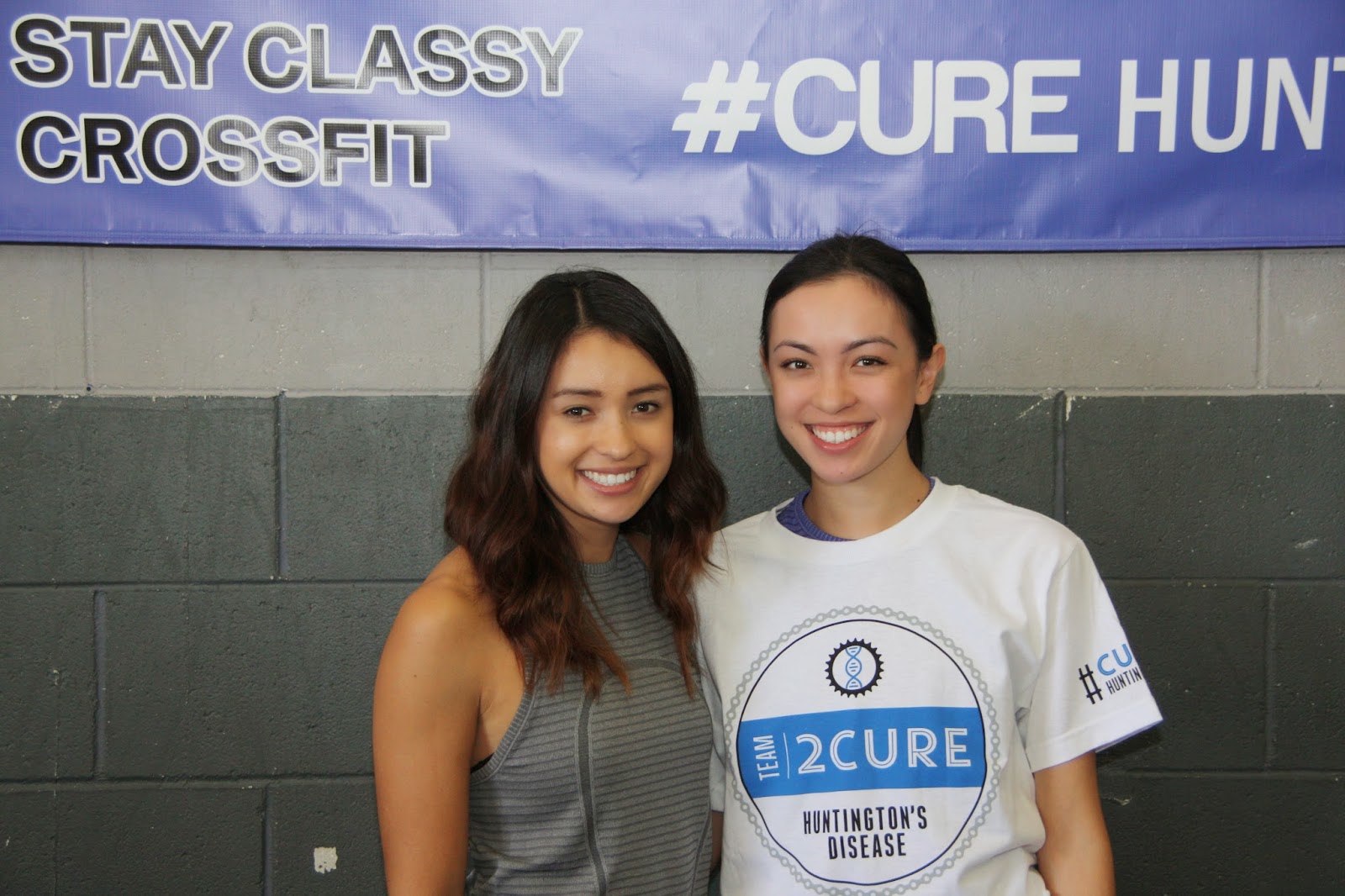 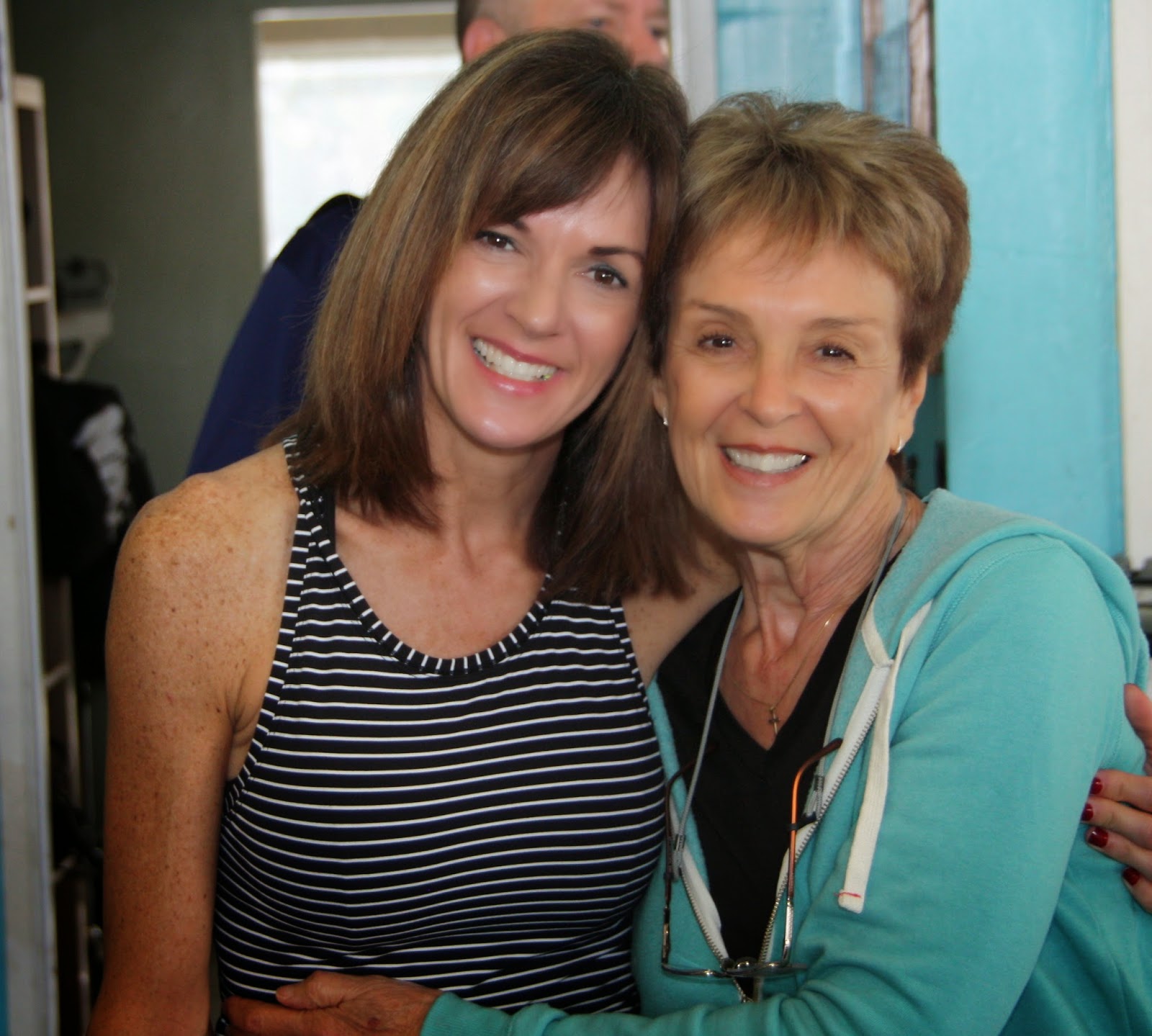 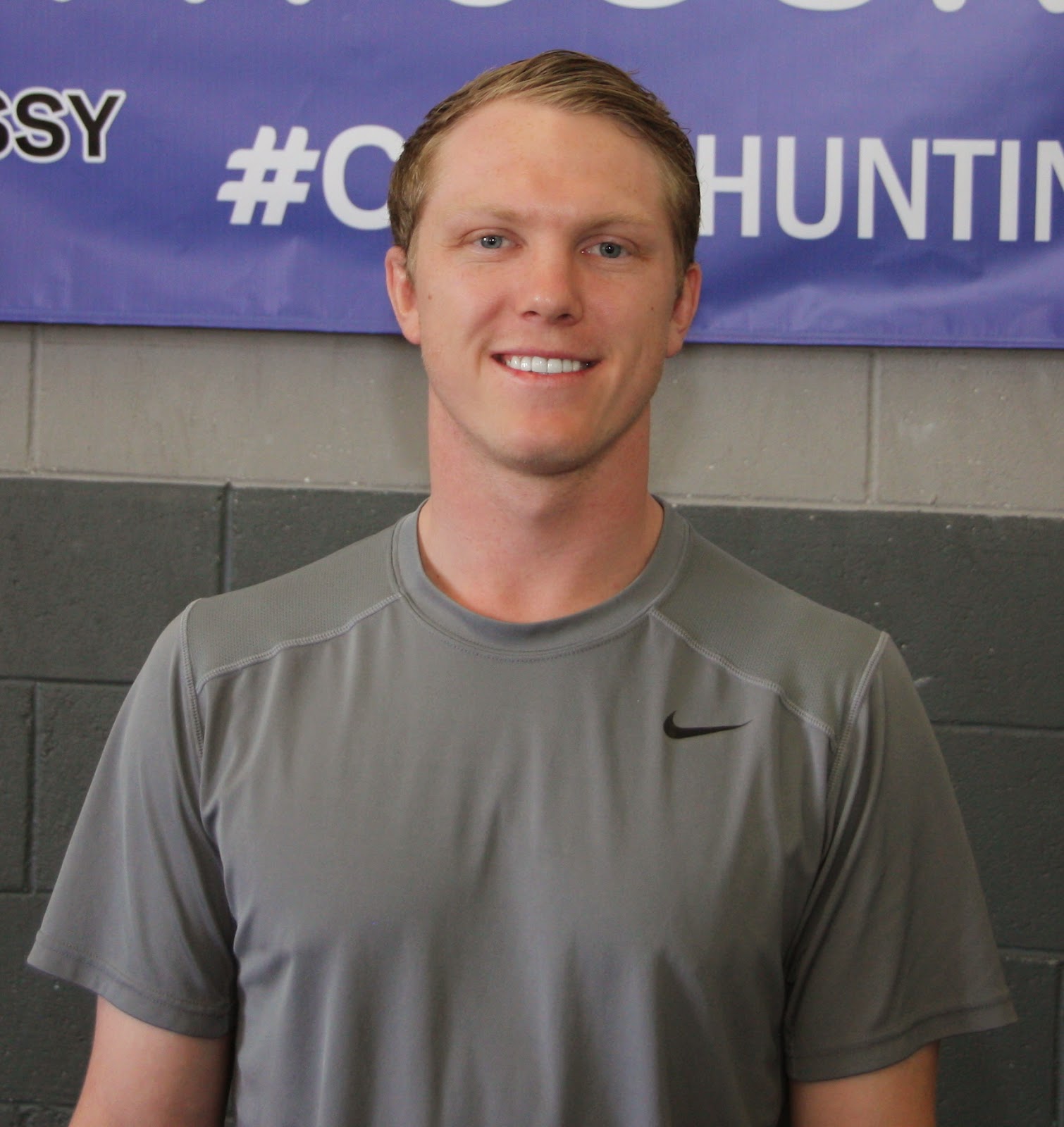 Andrew Herndon, coordinator of the HDSA Center of Excellence for Family Services and Research at the University of California, San Diego 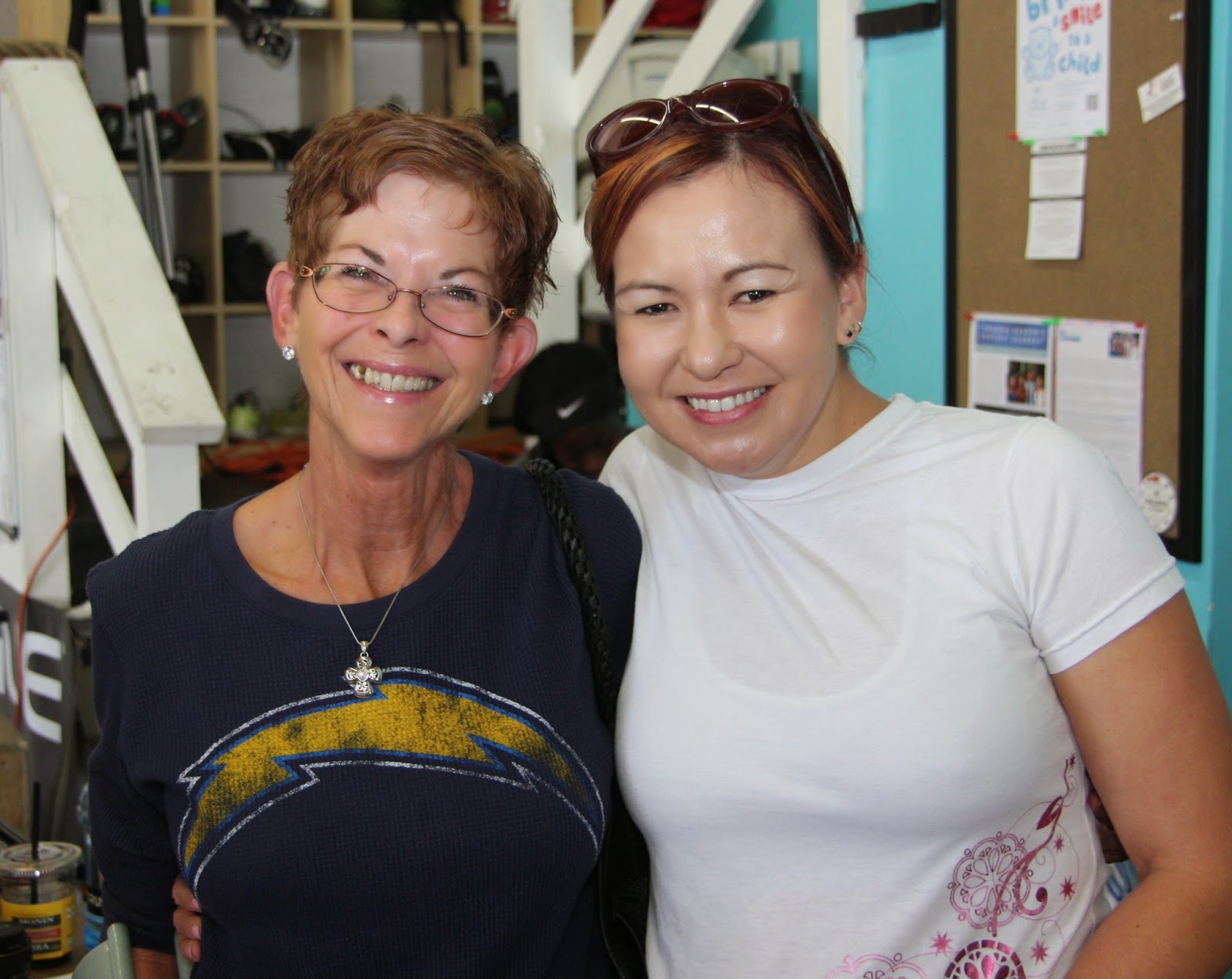