Another major supplement, creatine, proven ineffective in the fight against Huntington’s disease

For the second time in less than three months, a widely taken and long-studied dietary supplement envisioned as a potential treatment for Huntington’s disease has been proven ineffective, bringing a halt to a clinical trial.

Creatine, a supplement popular among body builders and readily available in health food stores, was studied in a clinical trial called CREST-E (Creatine Safety, Tolerability, and Efficacy in Huntington’s Disease), which began in 2009 and was to be completed in 2016.

On October 29, the National Center for Complementary and Alternative Medicine, part of the National Institutes of Health (NIH), announced that it was discontinuing CREST-E because a preliminary analysis of the data “showed with high confidence that it was unlikely that the study would be able to show that creatine was effective in slowing loss of function in early symptomatic Huntington’s Disease.”

The study was carried out by the Huntington Study Group (HSG) and led by Dr. Steven Hersch of Massachusetts General Hospital and Dr. Giovanni Schifitto of the University of Rochester School of Medicine.

“The entire point of the CREST-E study was to determine whether creatine slows the course of HD or not, and the answer is, no, it does not,” Martha Nance, M.D., a member of the HSG executive committee, said in an e-mail. “Although this result is disappointing, it is still important, as it gives us a definite answer to the question: ‘I have HD. Should I take creatine?’ The answer is, ‘no.’”

“I recommend that all stop taking creatine,” Dr. LaVonne Goodman, the founder of Huntington’s Disease Drug Works (HDDW), said in an e-mail.

Huntington’s disease typically reduces people’s energy levels. Scientists thought that creatine, which cells use to store energy, might help compensate for the energy deficit in brain cells and enable them to survive.

Positive results in animal studies regarding the impact of creatine, the rise of HDDW’s “treatment now” program ten years ago, and the advent of both CREST-E and a companion study in presymptomatic individuals known as PRECREST led to much discussion about the supplement in the HD community.

Many people have taken or considered taking creatine in the hopes of avoiding or ameliorating symptoms.

I have taken creatine for about ten years, beginning with my participation in the HDDW program.

Just after receiving the news about CREST-E yesterday, I received an e-mail from an individual inquiring about where to purchase creatine and what amount to take. I responded that “it is now recommended that nobody take creatine.”

HDBuzz.net also reported on the end of CREST-E, calling the new evidence against creatine “compelling.”

In mid-August, the National Institute of Neurological Disorders and Stroke and the HSG stopped a clinical trial for coenzyme Q10, another widely taken supplement.

I outlined my approach to HD supplements and the pros and cons of the matter in a February article titled “To take, or not to take, unproven supplements in the fight against Huntington’s disease.” That article also reported on the hopes for PRECREST and CREST-E.

With the elimination of both coenzyme Q10 and creatine in rapid succession, the HD community is suddenly left without two potential treatments that supplied significant  hope.

However, supplements lack what researchers refer to as HD-specific approaches to treatments. They were not designed or marketed with HD in mind, whereas the new treatments currently under study will potentially attack the specific causes of Huntington’s.

Hope for effective treatments is on the rise as researchers and pharmaceutical firms gear up for new clinical trials such as the Isis Pharmaceuticals, Inc., gene-silencing approach announced for the first half of 2015.

“The important thing right now is to learn from ‘negative’ outcomes like this,” the HDBuzz article observed. “Studies like CREST-E have helped us, as a community, to get really good at designing, enrolling and running clinical trials, and understanding why particular treatments don’t work. Now we have the result of CREST-E, all that energy, enthusiasm and experience can be directed into testing other experimental treatments with a higher chance of success. One very solid benefit is that hundreds of volunteers are now freed up to sign up for other clinical trials enrolling now or in the near future.”

For the latest news on HD research and clinical trials, watch the video below for the update by Jody Corey-Bloom, M.D., Ph.D. (Note that the talk took place on October 27, before the announcement about creatine.)

The dire need for neurological treatments

I am now rethinking my approach to supplements. I have stopped taking coenzyme Q10.

I agree with the doctors’ recommendations to halt creatine. My breakfasts and dinners will no longer include a heaping teaspoon of fruit-flavored creatine dissolved in a glass of water. 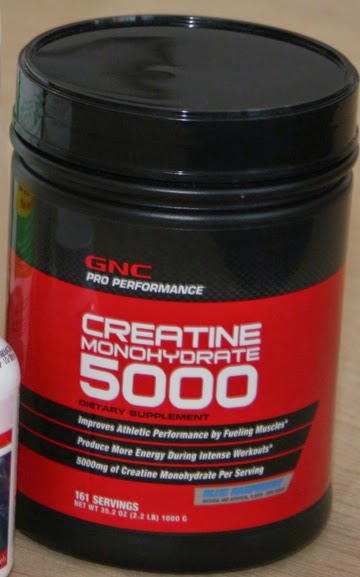 I will discard my remaining supply of creatine but keep the container as a piece of historical evidence in the quest for HD treatments.

It will also serve as a reminder of the dire need for truly effective approaches against a devastating disease that has reminded the world how the discovery of the first effective drug for any neurological disorder has continued to elude science.
Posted by Gene Veritas at 11:42 AM

If it does not work, and they know that, then why does it not work? What dosent it do? I would call theses questions a look on the other side of the pancake-- everybody knows pancakes, no matter how thin you make them always have two sides.
This story is not over.

The failure of Crest-e simply means it didnt work in stages 1and 2 of early symptomatic HD which were the inclusion criteria. With hindsight this is actually quite obvious. By the time someone is symptomatic they have had the disease for 30-50 years generally (ie from birth) , with slowly accelerating changes beginning to be visible on MRI for the last 20 years. The damage starts out simple, like one player in an orchestra, gradually triggering more kinds of damage (more instruments) , which then positively feedback and trigger yet more mechanisms as the whole gradually worsens into a fugue. The point of symptom onset is simply when the brain can no longer compensate for the damage by plasticity. The actual scientific evidence to date (PRECREST) is that Creatine works in pre-manifest people, earlier the better. What is needed now is not throwing the baby out with the bathwater but a replication and extension of PRECREST urgently. You can dam a spring far easier than the full blown mississippi. There are some simple trials like low dose lithium in combination with valproate and or SSRI that urgently need to be done in early symptomatic disease. Old ,well established drugs , not sexy, already being used piecemeal in symptomatic people. Look up the literature ( DM Chuang) in pubmed.

Is it true dear!! I haven’t heard about this earlier actually. But I have heard a lot about Creatine, and my friends who are body builders, they are using creatine supplement on daily basis. Hey can you share with me side effects of Green supplements is taken daily.