Fighting – and writing – to stay healthy: ten years of 'At Risk for Huntington’s Disease'

Ten years ago today, I launched this blog to explore the depths of living at risk for Huntington’s disease and to unburden myself of the fear of its inevitable symptoms.

Frankly, I did not expect to still be writing at 55.

At that age, my mother had developed chorea (the involuntary movements associated with HD) and was experiencing serious emotional and cognitive symptoms that would soon prevent her from speaking and caring for herself. This year marks the sad 20th anniversary of her official diagnosis. She died of HD in February 2006 at the age of 68.

I tested positive for the HD genetic mutation in 1999.

I strongly believe that my work on this blog – research, reflection, writing, advocacy, and networking – has helped me delay my own HD onset.

I cannot scientifically prove this, but evidence strongly suggests that mental stimuli and other forms of enrichment can positively affect the course of this disease and other neurodegenerative conditions.

Researchers have told me privately that they believe my mental activity has helped keep me stable. “Keep doing what you’re doing,” they say. 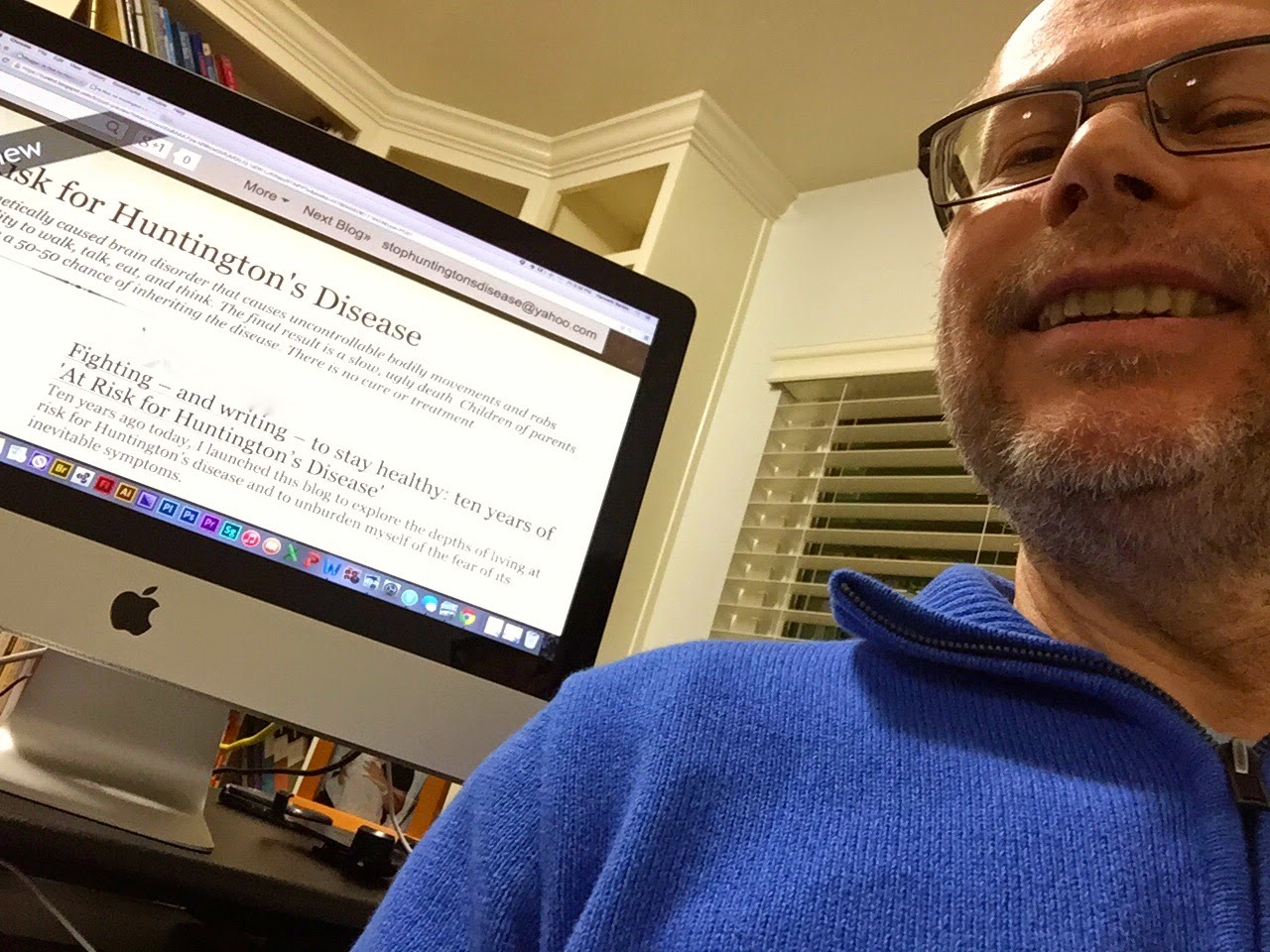 Life can be an emotional roller coaster. HD families ride the tallest and most twisted one, with HD gene carriers like me facing a terrifying descent into symptoms.

Starting in 2001, I wrote and edited Conquest, the tri-annual newsletter of the San Diego Chapter of the Huntington’s Disease Society of America. However, while revealing the stories of many HD-affected individuals and their families in Conquest, I never wrote about my own family’s plight.

I started At Risk at the urging of Norman Oder, a fellow Yale University graduate and colleague at the Yale Daily News.

As a young journalist in the 1980s, Norman by chance wrote an article about a New York area HD family. After we reconnected years later, he edited some of my Conquest articles. Coincidentally one told the story of that same family, part of which had moved to California.

In the early 2000s Norman and I brainstormed about how to increase media coverage of HD, including my own story, as a way to strengthen the cause and attract potential donors.

With that goal in mind, I initiated the blog to address the many complex issues faced by presymptomatic mutation carriers like me as well as untested at-risk individuals.

I didn’t realize at the time how much it would help me sort out my thoughts, engage with others in the HD community, and nudge HD activism. In February 2011, I examined this blog as an advocacy tool during my keynote of the Sixth Annual HD Therapeutics Conference, sponsored by the CHDI Foundation, Inc. In June 2011 I was named HDSA’s Person of the Year, an honor I never could have achieved without this forum. “I know, too, that this award is not just for me,” I wrote, “but for everybody affected by HD: the at-risk, the gene-positive, the symptomatic, the families, and the unsung heroes of America, the caregivers.”

From the start, Norman has applied his editing skills to virtually every article, almost always sending back revisions within a few hours. He has also suggested a number of topics and pushed me toward rigor when it’s tempting to just hope.

Norman is my “HD alter ego,” and a great friend.

A stalwart supporter of my activism, my wife Regina has reflected with me on the content of numerous articles. Our daughter Bianca has witnessed me writing and posting articles. Now a teenager, she has a record she can consult of her grandmother’s demise and her father’s writing and coping strategies.

Explicitly and implicitly, Regina and Bianca permeate the pages of this blog. More than anything else, their presence and love motivate me to fight HD and to improve as a husband, father, and human being. 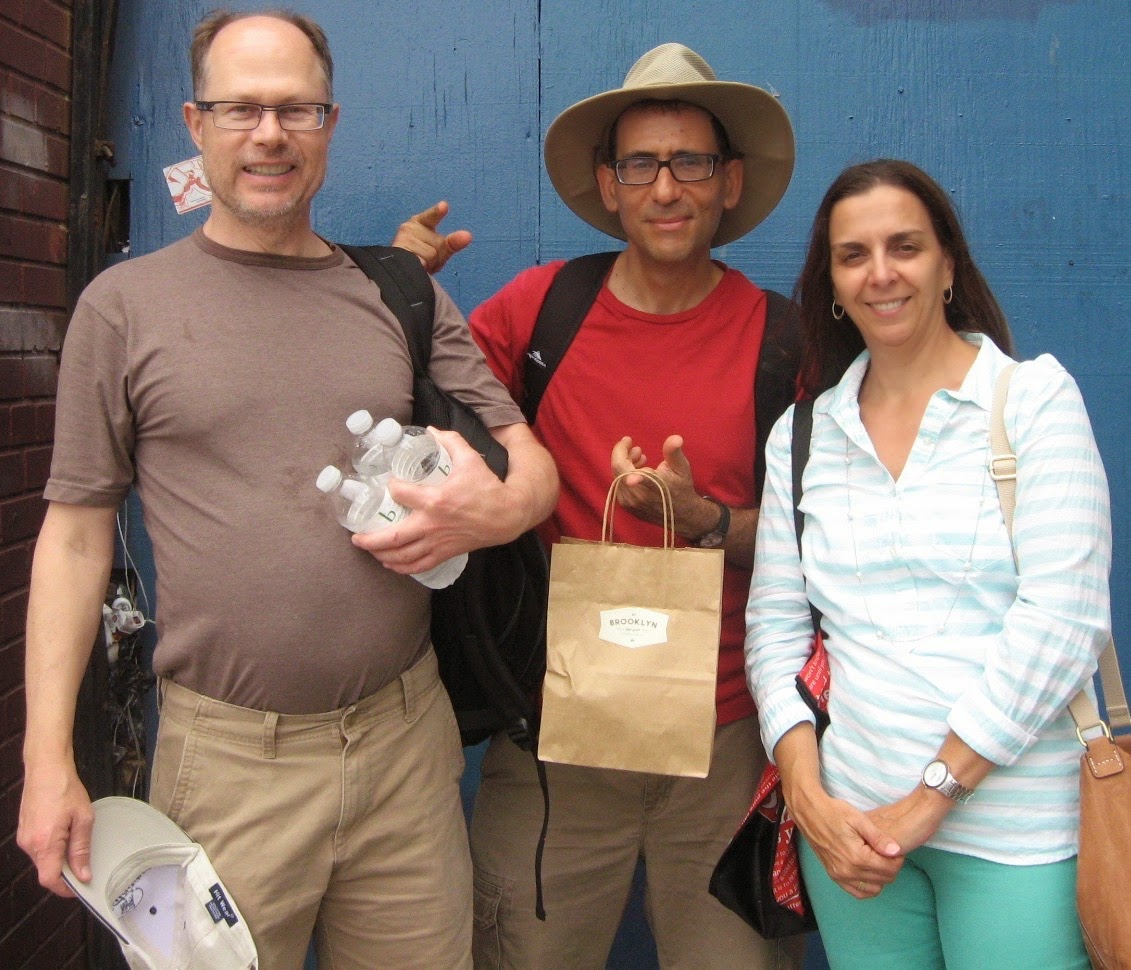 In that first year (2005), I wrote 17 articles. However, over the next three years I could only write 18 articles. I was distraught over the death of my mother from HD. I even acted out HD symptoms.

During those first four years, I focused primarily on my family’s struggles to care for my mother and how living with the gene affected my feelings and life.

With the help of my psychotherapist and a more effective set of medications for depression and anxiety, I started to turn the corner in late 2007.

In late 2007 I also wrote my first blog article about the potential of stem cell research for finding HD treatments. Along with other southern California advocates, I set up the very first presentations about Huntington’s disease before the state’s stem cell agency.

From that point on, the hope for treatments buoyed me emotionally and became a frequent theme of At Risk for Huntington’s Disease.

Expanding the research updates that I wrote for Conquest, I started doing on-the-scene reporting and in-depth interviews with researchers. In April 2008, I visited Isis Pharmaceuticals, Inc., in nearby Carlsbad, CA, to produce an article on the company’s ambitious efforts to stop HD very close to its genetic roots.

This year Isis will conduct the long-awaited Phase I clinical trial to test its potential gene-silencing drug.

The blog expanded to cover many of the difficult issues impinging on the HD community, including abortion; advocacy for a congressional bill to update the government’s disability criteria for HD;  the difficult discussions young at-risk people face during dating; and the challenges of finding adequate nursing home care for HD patients.

“I really absolutely admire your bravery in exposing this disease in a realistic and unapologetic way,” wrote Stella, another HD blogger, in a comment on one of my articles. Such comments help keep me going.

Writing the blog helped me think through the process of going public about my HD status after nearly 15 years of advocating anonymously and seven years of blogging under the pseudonym “Gene Veritas,” which I maintain as a symbol of our community’s fight for the cure.

Now, as I meld my HD advocacy with the career of Kenneth P. Serbin the professional historian, I have come to view the blog as a primary historical document of the “new and harrowing human experience of living in the gray zone between a genetic test result and onset of a disease.”

Above all, the blog is an emotional vent.

With you, my readers, I can share my feelings about facing a terrible, currently untreatable disease, build forces to defeat the profound stigma surrounding HD, and bolster advocacy to improve care and seek the cure.

Through At Risk for Huntington’s Disease – and the HD community I have reached on Facebook – I have gained many new brothers and sisters determined to survive HD and passionate about the noble aim of bettering humanity by solving a major medical and scientific puzzle.

Often, producing articles for the blog envelops me for hours and sometimes days as I research, travel, photograph, shoot video, write, revise, and post, and then engage with readers via e-mail and social media.

Sometimes I go to bed too late – not good for someone at risk for a disease that disturbs the body’s natural rhythms.

As I prepare to post an article, I experience a torrent of emotion, followed by a deep sense of relief.

The memories of twenty years of dealing with HD come flooding back, but in the end I have hope.

This article is posting number 197 in At Risk for Huntington’s Disease.

I am grateful that very soon I will be able to post number 200.

Tonight I will raise a glass to the blog.

I know it’s still a long shot because of the inevitability of HD symptoms, but I want to remain healthy long enough to write the article celebrating the discovery of a treatment so effective that I can stop worrying about HD and retire the blog.
Posted by Gene Veritas at 12:01 AM

Congratulations on achieving the 10 year milestone. I've enjoyed reading your blog posts over the past year since finding your blog. I am grateful for people like you who share your story as it helps to create a sense of community for those of us affected by HD. Congrats and thank you for all your hard work. All the best. xo

Thanks Gene, your blogs are really valued and the insights provided by an gene positive individual are immensely welcomed by those of us who live within a hd family, but are not at risk ourselves.

First, I am laughing at myself for not realizing Gene Veritas was a pseudonym! LMAO Oy!
Second, having just 'met' you recently, I have so much respect for you. You write so well ~ easy to read.
Finally, I look forward to the next 10 years with you, supporting you all the way.

I don't know why my pseudonym came up, but tuxcat is also Jodi COllins Einarsson.

A toast on your anniversary!!!!!

I am thankful that you continue to be such an advocate. You are a true inspiration, Ken.

I rely on your blog, Gene. Thank you so much for all the research you have done to make your posts informative. And thanks for the care you take in writing. Easy reading comes from hard writing, I know. Here's to the next decade. Let's make it a good one!
Bev Peterson

Thank you for all you do and say here. You are a real hero to me. I have 5 brothers and two of them passed of HD in May while one more has had the chorea symptoms for about 7/8 years now with increasing hostility & now my oldest brother was just diagnosed. to hear that you have such great hope gives me the same! Thank you so much!
April

Thanks for writing. I just found out my mom has HD and your blog has been a huge support as I figure possibly getting myself tested.