Ionis Pharmaceuticals has made two positive announcements about the historic Phase 1 clinical trial of its gene-silencing drug for Huntington’s disease: trial enrollment is complete, and the company will extend the study for all patients who complete Phase 1.

These are key steps on a multi-year path to possible Phase 2 and 3 trials that, if successful, would bring the trial drug, IONIS-HTTRx, to market. Typically, all three phases of a clinical trial project take at least five years, although nobody can predict the actual course of a trial.

IONIS-HTTRx aims to alleviate HD symptoms by reducing production of the huntingtin protein in brain cells (click here to read more). Ionis launched the Phase 1 trial in September 2015. Three dozen patents are taking part in the trial, expected to be completed by the end of 2017, at sites in Canada, Germany, and England. This first phase aims not to assess success in combating HD but rather simply whether the drug is safe and tolerable.

It marks the first time HD patients are receiving a substance aimed to attack the genetic causes of the disease. It’s also the first time they’re getting a drug via spinal injection.

“The safety and tolerability profile of IONIS-HTTRx in the completed cohorts of the Phase 1/2a study supports its continued development,” a June 22 Ionis news release stated. “Patients who complete the Phase 1/2a study will be eligible to participate in an open-label extension (OLE) study that Ionis plans to initiate in the next several months.”

“Open label” means all participants take the drug, in contrast with a “double-blinded” clinical trial like the current Phase 1, where half the patients receive a placebo and neither patients nor doctors know who is receiving the actual drug.

This month’s news provided the strongest indication so far that Ionis and its partner Roche, a much larger multinational pharmaceutical firm with vast clinical trial experience, will take IONIS-HTTRx into a larger, critical Phase 2 study, as early as 2018, to measure efficacy.

“Upon completion and full analysis of this study, the next step for this program will be to conduct a study to investigate whether decreasing mutant huntingtin protein with IONIS-HTTRx can slow the progression of this terrible disease," Frank Bennett, Ph.D., the Ionis senior vice president of research, said in the release.

Ionis has repeatedly indicated that a Phase 2 study would include U.S. trial sites. 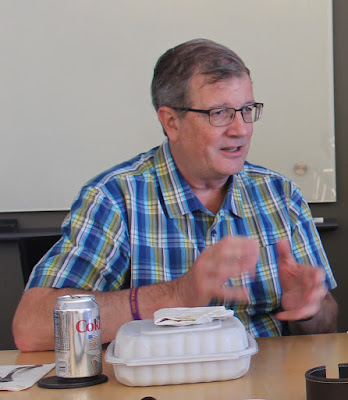 The double-blinded protocol of the Phase 1 HTTRx trial insures that bias and other external factors don’t affect the trial results.

As noted, in an OLE each participant receives the actual drug, and usually at the highest dose tried in Phase 1. An OLE allows researchers to gather more data, examine the drug’s effects over a longer period of time, and better prepare for an eventual Phase 2. Patients also potentially benefit by receiving the drug longer.

The HD research website HDBuzz, which is produced by clinicians and scientists, described the Ionis announcements as “cautiously optimistic news.”

“News that the trial is fully recruited and the final patients are going through the procedures is a strong suggestion that even at the highest doses, the drug’s safety looks good,” the HDBuzz report observed. “Despite exhaustive safety testing before going into patients, any drug can produce unwanted effects, so that’s really the best news we could be hoping to hear at this stage.”

Regarding the open-label extension, it added, “We don’t want to read too much into a brief announcement, but running an OLE isn’t cheap for a trial sponsor, so this announcement certainly gives us optimism about the whole HTTRx program.”

Signs of HD in the blood

A separate research study, with results published June 7, could help Ionis and Roche researchers evaluate the results of the Phase 1 trial and plan the potential Phase 2 trial.

In what was described as a “major advance in the field of Huntington's disease and neurodegeneration in general,” a team of researchers has identified a potential blood biomarker for HD.

Biomarkers indicate a disease mechanism or drug impact. They are common for many diseases, but the complexity and inaccessibility of the brain have made it extremely difficult for researchers to find them for neurological diseases.

HD scientists have most recently focused on obtaining biomarkers from the cerebral spinal fluid (CSF). However, obtaining CSF, which requires puncturing the spine, is far riskier than drawing blood, the technique used in the new biomarker research.

Led by Ed Wild, M.D., Ph.D., one of the administrators of the IONIS-HTTRx trial in England, the new biomarker study demonstrated that a brain protein known as neurofilament light chain (Nfl) appears in the blood of HD patients and presymptomatic gene carriers. (Click here and here to read more.) 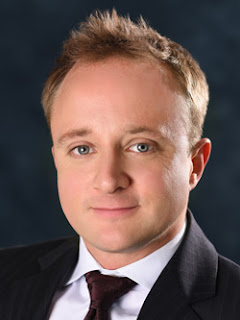 Dr. Bennett of Ionis previously described Nfl as a protein involved in the cytoskeleton, or internal “scaffold,” of neurons. HDBuzz likened it to “the ribs of an umbrella.”

Dr. Wild’s team discovered that, the more advanced the stage of HD, the greater the amount of Nfl in the blood.

“This suggests that a blood test might be able to provide consistent information about the brain, in place of an invasive spinal tap,” HDBuzz commented. “We hope [Nfl] will be added to the arsenal of resources that are helping us to monitor HD and to develop new therapies.”

Indeed, the IONIS-HTTRx researchers previously noted that Nfl is one potential biomarker in the Phase 1 trial.

Further research is underway to confirm the Wild team's results and to determine to what extent Nfl can be used as a biomarker.

Pope Francis, Ionis, and the hope for a cure

The Ionis announcements about the clinical trial came as the 32nd annual convention of the Huntington’s Disease Society of America got underway in Schaumberg, IL. In addition to the news release, Ionis issued a letter to the HD community.

“We can assure you our number one goal remains our commitment to advancing IONIS-HTTRx development, a drug that has the potential to transform the treatment of HD,” the letter stated.

The positive news also comes in the wake of HDdennomore, the historic audience of the Huntington’s disease community with Pope Francis in Rome on May 18.

Dr. Bennett made a substantial donation to HDdennomore. He and several Ionis officials attended the audience. Dr. Bennett and his wife Paula sat in the front row along with leading HD scientists and dignitaries. They were greeted by Francis.

In his address, the pope recognized the geneticists and scientists “present here, who, for some time, sparing no energy, have dedicated themselves to studying and researching a treatment for Huntington’s disease. Clearly, there is a great deal of expectation surrounding your work: resting on your efforts are the hopes of finding the way to a definitive cure for the disease, but also of improving the living conditions of these brothers and sisters, and of accompaniment, especially in the delicate phases of diagnosis, at the onset of the first symptoms.”

If it succeeds, IONIS-HTTRx could fulfill those hopes and show the way to curing other neurological diseases. 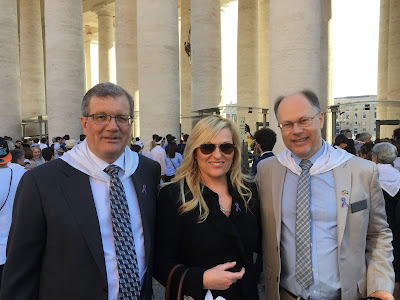 (Click on the links below for past coverage of the Ionis HD project.)

A key new ally in the search for Huntington's disease treatments

Observing the cure in progress
Posted by Gene Veritas at 11:42 AM

Thank you for once again giving us, your readers, a cogent explanation of the research that gives us all reason for hope. This Ionis gene-silencing drug has my hopes up.

Thank you Gene veritas for your updated information regarding ionis clinical trials indeed it's a good news. Hope it will continue & boon to hd patients