In chronicling the quest to cure Huntington’s disease, a whirlwind of emotions

Covering the 13th Annual Huntington’s Disease Therapeutics Conference left me with immense hope about potential treatments but also, as in the past, a whirlwind of emotions regarding the disorder that killed my mother and threatens the lives of tens of thousands of HD patients and presymptomatic gene carriers like me.

The conference began on February 26 with a remarkable keynote speaker invited by sponsor CHDI Foundation, Inc.: Nora Guthrie, the daughter of iconic folk singer and activist Woody Guthrie, who died of HD in 1967, and his late wife Marjorie. In 1967, Marjorie founded what would become the Huntington’s Disease Society of America (HDSA).

“We are the hopers and the changers,” said Nora Guthrie, quoting her father, to the audience of 350 scientists, drug company representatives, and family advocates. “The note of hope is the only note than can help us or save us from falling to the bottom.”

CHDI keynoters, who always come from HD-affected families, aim to inspire researchers’ quest for treatments. (I led off the 2011 event.) Guthrie interweaved her father’s music – he wrote “This Land is Your Land,” performed at President Barack Obama’s 2009 inaugural celebration – with the family’s struggles with HD. 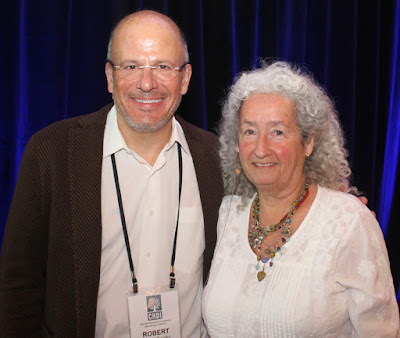 As reported in my previous article, the conference closed with the “best news since the discovery of the gene” in 1993: the Ionis Pharmaceuticals drug IONIS-HTTRx lowered mutant huntingtin protein an average of 40 percent, with a maximum reduction of 60 percent, in patients’ cerebrospinal fluid in a Phase 1/2a clinical trial (testing mainly safety and tolerability).

Based on animal studies, that translates into reductions in the cerebral cortex ranging from 55-85 percent. Ionis partner Roche, a major pharmaceutical firm based in Switzerland, confirmed that it would take the unusual step of skipping a Phase 2 trial (testing efficacy for the first time) and going directly to a Phase 3 (test and confirming efficacy in hundreds of participants).

I was elated to meet Nora, hear the Phase 1/2a results, and interview Roche representatives about the next steps in the clinical trial program for RG6042, the drug’s new name. (Roche and HDSA will update the HD community on Phase 3 eligibility criteria and other details.)

Upcoming articles will feature my interviews with the Roche officials and Guthrie. 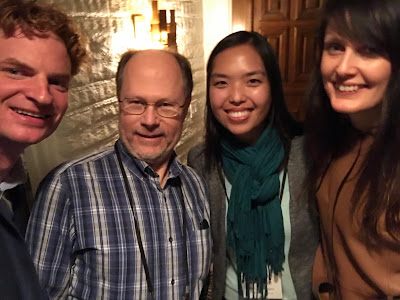 How early does HD start?

With several dozen presentations over 72 hours, the conference was a barrage of information about HD. Despite the positive news, like the six previous CHDI conferences I’ve attended, this event brought a stark reminder of the devastation caused by HD and the community’s urgent need for treatments.

I tested positive for the HD gene in 1999 and will, unfortunately, inevitably develop symptoms – unless a treatment becomes available soon. Watching the scientists’ presentations – many referred to the havoc caused in HD-affected brains – felt like getting a preview of how I’ll decline and die.

Sandrine Humbert, Ph.D., of the Université Grenoble Alpes (France), discussed the role of the huntingtin protein in the development of the cortex (the largest portion of the brain) of mice. Her research explores HD as a possible “developmental disorder,” that is, the progression of symptoms from the earliest stages of life, given that people like me are born with the genetic defect.

Dr. Humbert said that subtle signs of the disease appear “years before” the appearance of involuntary motor movements, which doctors until recent years used as the indicator of onset. Perhaps drugs targeting the “abnormal development” of the brain will be needed to “delay disease onset,” she concluded.

Further research is needed in this new area of HD science. Still, Dr. Humbert’s presentation and the subsequent Q & A with scientists made me wonder: as I push 60, are the memory lapses and other cognitive changes I’m experiencing because of ordinary aging – or HD?

In the video below you can watch the discussion of this point. For Dr. Humbert’s complete presentation, click here.

How early do Huntington's disease symptoms start? from Gene Veritas on Vimeo.

‘A bucket of cold water’

My interactions with physicians, scientists, and HD family members further reminded me of my “race against the genetic clock” and the challenges faced by HD families.

Despite the air of excitement about the Ionis Phase 1/2a results, one doctor familiar with my story cautioned me about the extensive time needed for Phase 3: “It’s a little bit naive to not consider that you might not be ready for the Ionis drug.”

“I feel like you’ve just thrown a bucket of cold water on me,” I told her.

The range of onset for someone with my mother’s and my level of mutation is between the late 40s and late 60s. She probably developed symptoms in her late 40s. She died at 68. At 58, I’m extremely lucky to have gotten this far without symptoms.

I can’t wait much longer for a drug. If successful, RG6042 probably won’t reach the market for five or six years – and that’s an optimistic scenario, since Phase 3 could fail.

The physician reminded me of the importance of planning carefully for the onset of symptoms, citing the case of one patient who was able to remain at work after some adjustments to his routine.

She did note that my advocacy and coverage of the CHDI meetings might be delaying onset: they provide me with purpose and intellectual enrichment.

At one lunch, I briefly recounted my family’s HD story to a group of researchers and the Swiss neurologist Jean-Marc Burgunder, M.D., who chairs the executive committee of the European Huntington’s Disease Network, a CHDI-supported nonprofit network for advancing research, facilitating clinical trials, and improving patient care.

I explained that, with no prior knowledge of HD, I received a bombshell in a phone call the day after Christmas 1995. In the space of a few minutes, I learned of my mother’s genetic test and diagnosis; my 50-50 chance of inheriting the gene; and the potential risk for any child I might father.

Back then, however, all I could do was to call my mother’s geneticist to get more information about HD and genetic testing.

To relive the emotional pain of that day and look back on the improved genetic testing process made me feel as if I were going through an out-of-body experience.

Sadly, learning about HD for the first time remains a shocking experience that won’t be eliminated until we have effective treatments.

Listening to other HD family members recall their stories of genetic testing of their children, I also remembered the months-long, anxiety-ridden process of having our daughter tested in the womb for HD. Luckily, she tested negative.

Research: ‘It’s for you guys’

Despite my renewed fears about HD, the final, upbeat session on “huntingtin lowering”  (reducing the amount of huntingtin protein in brain cells) lifted my spirits. In addition to the Ionis news, it included an update on another, recently started Phase 1b/2a gene-silencing clinical trial, PRECISION-HD, run by Wave Life Sciences. (Click here to watch a video of the presentation.)

During that session, I sat next to Scott Zeitlin, Ph.D., of the University of Virginia, whose presentation concerned his research in transgenic HD mice, a common tool of researchers, to measure the effects of lowering huntingtin. He described the types of changes in the animals’ brains that also compromise the human brain.

I was heartened to hear his conclusion.

“Many of these earlier changes that we see can be reversed fairly quickly,” he said of the experiment. “So I’m enthusiastic about this.”

Though the presentation was based on unpublished research – scientists don’t like to get “scooped” – Dr. Zeitlin gave permission to post it online (click here to watch).

“It’s for you guys,” he said, referring to the HD community and echoing the ethos of the quest for treatments. 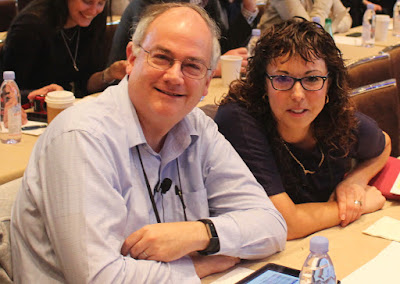 I left the conference at 10:45 p.m. on March 1, as the farewell banquet wound down. I had drunk a couple of cups of strong black tea – normally something an HD gene carrier should avoid but which I needed for the 140-mile drive to my home in San Diego.

I arrived at 1:10 a.m. the next morning and, wired from the tea and the conference, started work on my article about the event. I finally went to bed at 5 a.m. – also not good for an HD gene carrier but perhaps understandable given the circumstances.

It was titled: “The best news for the Huntington's disease community since the discovery of the gene: Ionis trial data revealed, Roche confirms jump to Phase 3” (click here to read more).

Appropriately, it was entry number 250 in this blog: a personal milestone symbolic of my avoidance of symptoms, of my advocacy, and of the hope for treatments or even a cure.

(Visit my Vimeo album for other presentations and interviews at the conference.)

(Disclosure: I hold a symbolic amount of Ionis shares.)
Posted by Gene Veritas at 9:19 PM

The excessive duplication and production in the CAG string in Huntington is in some ways comparable to the excessive cell duplication in cancer. Additionally defective Huntington cells seems to escape cell system regulation like mismatch repair, a problem also present in cancer. It would seem obvious that approved chemotherapy drugs could possibly provide a benefit to patients without the tremendous costs involved in developing a new drugs, but that does not seem to have been tried.