Continued progress, but also caution, in the fight against Huntington’s disease

CHDI Foundation’s 14th Annual Huntington’s Disease Therapeutics Conference gets under­­ way today in Palm Springs, CA, in the wake of key developments in the search for the first HD treatments.

On January 28, pharma giant Roche announced that it had enrolled the first participant in GENERATION HD1, its historic global Phase 3 clinical trial of a gene-silencing drug that, if successful, could slow, halt, and perhaps even reverse HD symptoms. (Click here to read the announcement to the HD community by Roche ).

In the coming months, Roche aims to enroll a total of 660 clinical trial volunteers in 15 countries. They will receive either the drug (called RG6042) or a placebo in monthly spinal taps over 25 months.

The start of the trial comes less than a year after the presentation of the impressive Phase 1 trial results at last year’s Therapeutics Conference. RG6042 significantly reduced the levels of the mutant huntingtin protein in the cerebrospinal fluid of the clinical trial volunteers. Because of those results, Roche took the unusual step of skipping a Phase 2 trial and going directly to Phase 3.

Roche’s announcement follows a record year for new drug approval by the U.S. Food and Drug Administration (FDA), with 59 drug approvals overall, noted George Yohrling, Ph.D., the senior director of mission and scientific affairs for the Huntington’s Disease Society of America (HDSA). The previous record was 53 in 1996.

Of last year’s approvals, 34 involved orphan conditions like HD (fewer than 200,000 patients) – a sign, said Dr. Yohrling, that the pharmaceutical industry has not ignored those disease communities. He spoke in a January 16 webinar reviewing progress in HD research in 2018.

With a record 360 participants from around the world, the CHDI conference opens this evening at the Parker Palm Springs hotel and runs through February 28. At the conference, I hope to obtain comment from Roche officials about how the acquisition could potentially expand Roche’s approaches to treating HD. Spark has engaged in pre-clinical HD research. 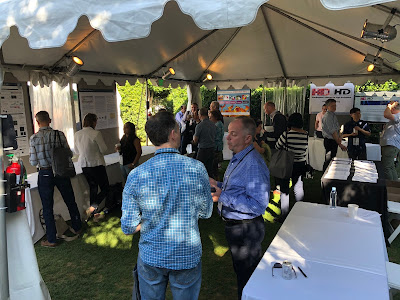 Above, scientists visit the CHDI Resource Fair at the 14th Annual HD Therapeutics Conference. Below, Gene Veritas (aka Kenneth P. Serbin) at the Parker Palm Springs (photos by Gene Veritas). 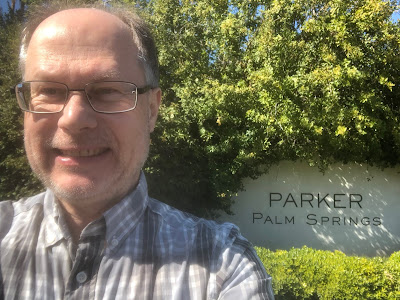 Exciting announcements about other trials

On January 22, the Dutch-American company uniQure announced that it had received approval from the FDA to start the first-ever HD clinical trial that uses a virus injected into the brain carrying a gene therapy agent to reduce the amount of harmful huntingtin protein. Viruses are used in vaccines and to treat cancer. They are under study for use in HD and other diseases.

However, it also noted that “gene therapy is a high-risk high-reward strategy. The benefits could be long-lasting – but so could any side effects.”

In this Phase 1/2 clinical trial, uniQure will primarily test safety and tolerability but also whether its drug is working as designed. It plans to start enrolling clinical trial volunteers in the U.S. in the second half of this year.

In late January, the California Institute for Regenerative Medicine (CIRM), the state’s voter-approved multi-billion stem cell initiative, announced a $6 million grant to prepare the way for a potential HD stem cell clinical trial. CIRM awarded the grant to the lab of Leslie Thompson, Ph.D., of the University of California, Irvine. The therapy could involve the transplanting of stem cells converted into neural (brain) stem cells shown in HD animal models to improve the function of compromised brain cells.

"Based on our pre-clinical studies in mice, human neural stem cells are highly beneficial, reducing the accumulation of a toxic form of the mutant huntingtin protein and improving HD symptoms and impaired electrical currents in the brain," Dr. Thompson explained in a news release.

Another company’s plans have been slowed. The FDA has delayed two Phase 1 clinical trial by Wave Life Sciences using a drug – an antisense oligonucleotide – similar to Roche’s RG6042.

Whereas RG6042 reduces the amount of both mutant and normal huntingtin protein, Wave’s drugs target only the mutant.

“In the United States, we received approvals to proceed with the single-dose portions of both trials,” a February 6 Wave prospectus states. “However, the FDA indicated to us that we cannot progress to the multiple-ascending dose portions of these trials in the United States unless we conduct an additional preclinical [animal] study and present the resulting data to the FDA for its review.”

The news about Wave might be a cautionary tale for the HD community about realistic expectations. Only ten percent of clinical trial projects result in a drug reaching the market.

Alzheimer’s disease is another case in point. Over the past ten years, all 25 Alzheimer’s clinical trials have failed, noted Jody Corey-Bloom, M.D., Ph.D., the director of the HDSA Center of Excellence at the University of California, San Diego (UCSD), during her annual HD research update last October at the local HD support group.

As Dr. Corey-Bloom explained, most of those Alzheimer’s trials successfully removed seemingly harmful plaque from the brain, but they didn’t cure the disease.

Such plaque isn’t a factor in HD, however, perhaps increasing hope that the Roche Phase 3 trial has a better chance of producing effective results, she observed. Dr. Corey-Bloom’s well-regarded UCSD clinic is one of the sites for GENERATION HD1.

In her presentation, Dr. Corey-Bloom addressed several of the key questions about GENERATION HD1 that have emerged in the HD community, including concerns about the injection of the drug by spinal tap (lumbar puncture).

She noted that spinal taps are a regular part of treating a condition known as pseudotumor cerebri, which produces severe headaches and, if left untreated, blindness. Patients get monthly spinal taps.

“We’ve had people that have probably done lumbar punctures monthly for several years, and they seem to do okay,” she commented.

She was optimistic that, if GENERATION HD1 is successful, Roche and physicians will seek alternatives to spinal taps. They will also pursue expanding access to the drug to presymptomatic gene carriers, she added. (That includes me.)

“I’m always talking about things that will eventually come,” said of previous talks, in which she has cautioned the HD community against unwarranted enthusiasm. “Now we actually have clinical trials, and we have clinical trials that look like they are going to be effective. That’s probably the strongest statement that I’ve made, because I’m always trying to tell people, ‘Let’s just wait and see.’”

However, with the Alzheimer’s trials in mind, Dr. Corey-Bloom also reminded the audience that there is no guarantee GENERATION HD1 will actually affect the disease.

She crossed her fingers for good luck. We in the HD community will need to continue our hard work collaborating with her and the many other researchers engaged in the quest for treatments.

You can watch Dr. Corey-Bloom’s presentation in the video below.