In a poignant night of football talk and appeals to combat Huntington’s disease, San Diego’s eleventh annual Celebration of Hope Gala put the National Football League (NFL) front and center in the campaign to protect the health of our most important organ: the brain.

NFL Commissioner Roger Goodell headlined the event, titled “NFL: America’s Passion.” Held by the San Diego Chapter of the Huntington’s Disease Society of America (HDSA-San Diego) on November 9, 2011, the gala attracted a record audience of some 600 people at the Manchester Grand Hyatt hotel, including sports celebrities and representatives of major donors such as Qualcomm.

Goodell, interviewed on stage by ESPN football analyst Chris Berman, addressed such controversial topics as recently “testy” player-owner relations and the San Diego Chargers’ quest for a new stadium. Perhaps most of all, Goodell recognized how the NFL must take the lead in making football a safer game for players and, I’d add, especially their brains. 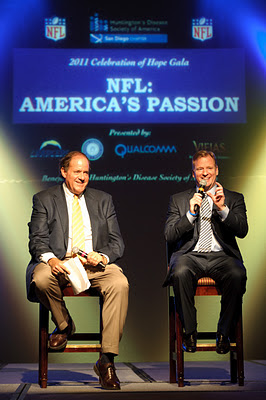 “Part of our labor agreement was player health and safety and how we make the game safer,” Goodell explained about the recently signed accord between the owners and the players’ union. “I firmly believe the game is safer and more popular than ever, but I think we can do better…. That’s priority one.”

Goodell cited reducing physical contact during training camp, avoiding the creation of a longer season until the game becomes safer, and prohibiting techniques that lead to frequent injuries.

Goodell’s comments come as concern about brain injuries heightens in the wake of growing evidence about the dangers of concussions not only for the hard-hitting professional players, but the millions of youths who play at all levels.

You can watch the Berman-Goodell interview in the video below.

Although nobody explicitly made a connection between research on brain injuries and HD, both fall into an area of inquiry in which understanding and treating one condition can bring benefits to sufferers of other conditions.

HD research sheds light on Alzheimer’s, Parkinson’s, Lou Gehrig’s, and a host of other brain conditions. Stroke and spinal cord injuries enter the mix, too.

So it’s conceivable that HD research – which has led scientists to plumb the mysteries of the brain – could suggest strategies for preventing and treating brain injuries such as those sustained by athletes.

Even without an explicit mention of an HD-concussion link, the gala drove home the point by bringing together Goodell, HDSA-San Diego, Chargers President Dean Spanos, and other leaders of the football world.

Berman’s lessons from the Johnstons

Prior to his conversation with Goodell, Berman, the gala emcee, underscored the tragedy of HD by recalling his long friendship and professional collaboration with Bill Johnston, the Chargers’ PR director and the husband of Ramona Johnston, who is in the late stages of HD.

“Being a PR director in the NFL is very hard work, but I thought that he was like me,” recounted Berman. “He had a very attractive wife and two very nice children. But I realized that, while that was all true, when Ramona came down with Huntington’s disease, I learned that he and the Johnstons were quite not like me. What I knew was only ten percent, maybe, of what he, Mona, and the children go through each day.”

To hear more of Berman’s remarks, watch the video below.

(You can read more about the Johnstons by clicking here.)

Johnston was the prime mover behind the gala. Ramona was diagnosed with HD in 1999. Unable to care for herself, she has resided the past several years at Edgemoor Hospital, a public facility for people with HD and other debilitating conditions.

“It’s just a horrible, horrible disease,” Johnston explained. “Some have called it the devil of all diseases, because of the symptoms and how it affects people and families. It’s a brain disease that causes brain cells to die.

“And your brain controls obviously everything that you are, mentally, physically. Your brain is who you are, in so many ways. This disease robs you of who you are.”

The Johnstons’ son Jared and another young man then helped Ramona from her wheelchair and onto the stage. They held her in a standing position as Johnston continued his powerful and wrenching testimony.

“If Mona could talk right now, she would just say thank you – thank you for being here – and tell the world about this disease,” Johnston told the audience, his voice filled with emotion. “Tell anyone you can tell. Because you are here to make a difference, and you are making a difference.”

You can watch Johnston and Ramona in the video below.

The Johnstons and HDSA-San Diego

In 1999, I myself tested positive for HD. I vividly remember speaking with Ramona at a benefit walk-run co-sponsored by the Chargers. We commiserated with each other about our gene-positive status.

Ramona was still very lucid, though her symptoms had already started. As I watched her decline over the years as my mother also succumbed to the disease (she died in 2006), I knew that I would follow in their footsteps. Ramona is now 52 – just one year older than I.

Along with Johnston, HDSA-San Diego board members, and numerous volunteers, I have worked assiduously to raise the profile of HD. I attended dozens of board meetings at which Johnston was present. I’ve visited Edgemoor a number of times, several of them with Bill, to gather information and take photos for the HDSA-San Diego website and publications. He and I have exchanged literally thousands of e-mails about all aspects of the HD cause.

In October 2007, I arranged for Bill and Ramona to appear before the oversight committee for California’s multi-billion-dollar state stem-cell initiative to make a plea for HD research funding.

In all, I estimate that in the past decade the San Diego chapter has raised more than $2 million for HDSA.

At the gala, I commiserated with another emerging leader of the HD movement, Katie Moser. Katie supports the cause through her position as manager of advocacy and patient support with Lundbeck, the pharmaceutical company that markets Xenazine (tetrabenazine), the first federally approved drug for chorea, the dance-like movements and tremors typical in HD.

“Lundbeck has established a strong relationship with the HD community in the U.S. over the past two and a half years,” Moser told the audience. “I am fortunate to be a part of Lundbeck, because, as some of you might know, I grew up in a family affected by Huntington’s disease, and in 2005 I had the genetic test that shows that I have the genetic mutation that will cause the disease.”

As a sign of hope for the HD community, Moser reported on Lundbeck’s renewed commitment to finding treatments. 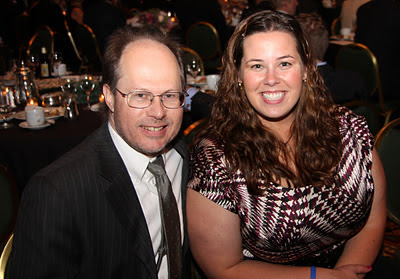 I also greeted the Johnstons’ 23-year-old daughter Hayley, a co-chair of the gala and an energetic and highly focused board member who is at risk for HD but has yet to test for the condition. Several years ago her older brother Jared, now 26, tested negative.

Earlier I helped man an HDSA information table, where other volunteers and I solicited people’s e-mail addresses for our chapter database and asked them to sign a petition urging passage of the Huntington’s Disease Parity Act of 2011, a bill in Congress that would make it easier for HD patients to obtain their rightful federal benefits. Terry Leach, a 14-year-old stricken with juvenile Huntington’s disease and confined to a wheelchair, handed out blue HDSA “Care2Cure” wristbands.

At dinner I sat at a table with Hayley’s work colleagues from Qualcomm and also Lindsey Zan, an untested, at-risk woman and one of five people featured in a moving video screened at the gala.

Support from the Chargers

Throughout the Johnston family’s personal ordeal and the San Diego chapter’s collective efforts to raise funds and awareness, the Chargers organization has lent its support in numerous ways, including sponsorships and other donations totaling hundreds of thousands of dollars.

In addition to this year’s gala, Chargers President Dean Spanos and his wife Susie have attended and supported a number of past galas, and Dean’s father and team owner Alex Spanos has also donated to the effort. Dean and Susie’s two sons have also participated in a number of HDSA-San Diego events.

The family is well aware of the fragility of our brains. In 2008, Alex, at 85 and afflicted by severe dementia, wrote a holiday letter to his family lamenting his loss of memory and expressing his love for them. Susie’s father had Alzheimer’s.

In 2003, Dean and Susie Spanos were honored at HDSA’s annual Guthrie Awards Dinner in New York. At the 2008 dinner, Johnston was awarded HDSA’s Marjorie Guthrie Leadership Award. On hand were HDSA-San Diego board members, former New York Governor George Pataki and his wife Libby, the Spanoses, and Goodell.

A cerebral matter for everybody

The San Diego gala hit the mark in describing the NFL as “America’s passion.”

As I have written before, “the Sunday ritual of watching football has taken over as the national religion, a religion where people profess a belief in sports as the path to success in life.” Rooting for our favorite team also permits us to unleash our instinctual tribalism and the primordial exercise of violence. 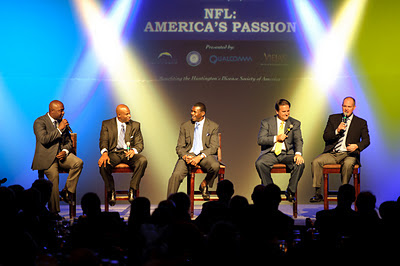 But the gala transformed that passion from something primeval into a cerebral affair: first, in an intellectual sense, by discussing it a high level, and, secondly, in a literal sense, by recognizing the primacy of the brain.

Playing excellent football requires the utmost stretching of the brain’s powers as the athlete strives for perfect physical coordination and intelligent tactics and strategies.

Promoting brain health requires that we protect, nourish, and exercise our brains. This includes wearing a helmet during football, but it also means redesigning the game, gear, and rules.

Ultimately, I hope, the cerebral passion of the NFL will make brain research a national priority at a time when HD, Alzheimer’s, and other brain disorders are beginning to strain our resources with a massive caregiving burden. Goodell, the NFL teams, and the league hold great sway in our society and have the power to mobilize people in a grand cause.

As an HD-positive person praying each day not to become like my mother, Ramona, and thousands of other Americans who have fallen victim to HD, I fervently hope that the NFL will take the lead of the Chargers, joining the campaign to end HD and protect the brain.

Great I am screwed. Not only am I positive for HD but I have had 10 sports related concussions too!