Creating a Christmas memory for a Huntington’s family

As he slowly succumbs to Huntington’s disease, Dan Boyle of Bakersfield, CA, is building a legacy for his five-year-old at-risk son Colby to remember when the symptoms make impossible his greatest professional love: conducting music.

On the evening of December 19, with his musically inclined wife Audrey and Colby present, Dan, 45, will lead the Poway High School Band in a performance of “Russian Christmas Music,” the piece that inspired him to pursue a musical career when he played trumpet in the band in the mid-1980s.

“Every aspect of music is cool,” Dan said as we sat outside the Poway High band room this morning after he conducted a half-hour rehearsal of the song along with 175 band members. “I just want him to see this particular aspect. He can already pick up my trumpet and make a sound. He’s been to all our performances. The more avenues he can see, the better.”

A tradition more than three decades old, the annual Poway High Winter Band Concert involves band alumni in the performance. This year, because of Dan’s popularity and his struggle against HD, alumni from around the country and as far off as Japan will visit and play their instruments under his direction.

“He’s the last person in the world that deserves this, although we knew there was a possibility,” said Ron Schei, a childhood friend who lives near Toyko, referring to Dan’s diagnosis and his family’s history of HD. “It’s just a horrible, horrible thing.

“It’s a beautiful event. It’ll be important for Dan and for us. And if it leads to more awareness – most people don’t know about Huntington’s – and brings in some donations for the cure, it’ll have a positive effect.”

“They want to share that experience with him,” Sylvester Sybilski, the assistant band director, said of Dan’s friends. “That’s what I think is touching everyone’s heart: how he’s trying to create these moments for his son and videotape them so that eventually, when the disease gets the best of him, his son will have a record of all these events he’s going to be doing for the next five, ten years.”

Christmas this year has a special meaning for Dan. “Seeing how many friends are coming, it really makes you feel good,” he said. 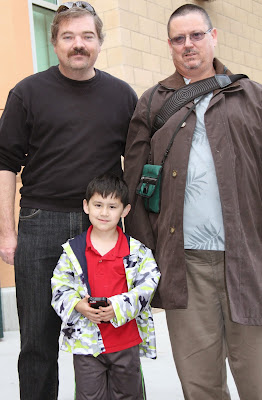 Over the years, Dan had garnered recognition for his musical talent and leadership. A native of Rancho Bernardo, CA, he was part of a world champion drum corps team at the University of California, Los Angeles, where he and Audrey met while both receiving degrees in music education. In Bakersfield, CA, where the couple worked as music educators, he was teacher of the year at Highland High School, and in Kern County he was named jazz educator of the year, orchestra educator of the year, and band director of the year.

However, Dan’s fate would include an encounter with HD. His mother, aunt, and grandmother all died of HD. He first noticed symptoms in himself in 2009 and received an official diagnosis in 2010.

After more than a decade of employment, he was no longer able to work. He receives a public school teacher’s pension and Social Security disability, while Audrey, 40, continues to work as a junior high school music instructor and band director.

In a typical progression of HD symptoms, Dan said that he can no longer multi-task, and his short-term memory is bad.

“Packing yesterday, there were three different times when I went to get the same item,” he said with a bit of a chuckle. “In the big realm of things, I would rather have short-term than long-term memory loss. Long-term is your real memories. Short-term is convenience.”

HD is also affecting him physically. He has a still mild version of the involuntary movements experienced by most HD patients. His eyes move irregularly or sometimes seem to stare into space, and his face freezes up. He also has some difficulty in speaking.

“I just started to feel weaker. I hadn’t gone skiing since Colby was born, and last winter we went. Before I was diagnosed, I could do the intermediate slopes. (This time) I was on the easiest slope there was, and I fell like ten times.”

He adds, chuckling, “I have no sense of balance! I think I know when to say when.”

Falling presents the biggest threat to Dan’s health. He recently needed to receive staples for a gash he suffered on his head. During our conversation, he turned his head to show me a very large, red bump on the back of his head from another fall just yesterday.

He plans to start using a motorized wheelchair soon.

“I won the lottery, I guess,” he said with a laugh.

However, HD’s onslaught has not stopped Dan from conducting again for the first time in several years. In today’s rehearsal of “Russian Christmas Music,” he sat in a conductor’s chair and will do so again at the concert.

“I conducted ever day, five hours a day,” Dan recalled. “When you teach music, you stand all day. It would never bother me, even a little bit.

“Over the last six to eight months, I have noticed an extreme shrinking of the time that I can stand without pain.”

Sylvester and band director Mike Cook are “bending over backwards” to make it possible for him to conduct, Dan said. He happily complied with Mike’s request for a taped audition. 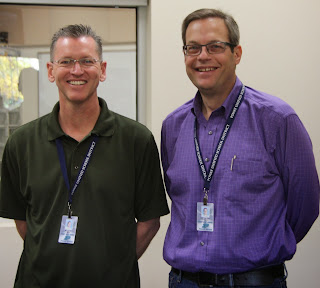 “You can easily ruin a performance as a conductor, and because the score is an advanced score, he just wanted to make sure I could still do it,” Dan said.

Although Dan experienced some HD movements during the rehearsal, he successfully finished the piece along with the students.

“’Russian Christmas Music’ is a very challenging piece of music,” said Sylvester. “So, even for someone in perfect health, it would be a challenge. I think it went very well.”

“His mind seems pretty clear,” noted Mike, adding that Dan has “an extremely bright wit” and an “obviously still strong” sense of humor.

“It’s a pretty cool feeling to get to control all that sound at once and have it respond to you,” Dan said of the work of conducting. “I couldn’t believe I didn’t really have any good videos of me conducting. I have lots of me playing, but not of my conducting. I’m glad they gave me the opportunity to do this.”

You can watch the rehearsal in the video below.

Planning a future for Colby

Dan is also writing an autobiography he wants Colby to read someday. It will include fatherly advice for a young man. It will also address the family’s experience with HD.

During our interview, Colby sat next to Dan. Engrossed in a hand-held video game, Colby raised five fingers when asked to tell his age.

Like many HD families, the Boyles faced difficult decisions. Colby was born not long before Dan’s symptoms began. Even though the couple knew of Dan’s risk for HD, he had not been tested. Nor did they resort to methods for avoiding the transmission of the mutation. They preferred to let life take its natural course.

“Obviously I worried about passing it on,” said Dan. “I just figure there’s always hope for the cure. He could get hit by a bus tomorrow. I could, too. I got a scholarship to UCLA. I played trumpet in 40 of the 50 states. I’ve travelled. I’ve done a lot of good things. Hopefully he’ll be able to experience those things before whatever.”

However, Dan and Audrey are proactive about his HD. They keep informed about the latest developments in HD research. They attended the annual convention of the Huntington’s Disease Society of America in Jacksonville this year and in Las Vegas in 2012. Dan is also participating in a clinical trial to examine the efficacy of the supplement creatine. He plans to enter any other trial for which he qualifies in the future.

“I just want to make sure, whether Colby has it or not, that I’ve done everything possible to help the cause of research,” Dan said. “That’s one of my big responsibilities. When I was a kid they said, ‘Oh, you don’t really have to worry about it, because by the time you’re old enough, they’ll have it cured.’ I remember hearing that time and time again. But that didn’t happen.”

For now, Dan is taking advantage of every moment.

He uses music, especially playing the trumpet, to try to stave off the impact of HD on his brain.

“There’s so many decisions every second in music,” he said. “It's unbelievable how active your brain is while you’re playing.”

He, Audrey, and Colby will spend Christmas at home in Bakersfield – preceded, of course, by Dan putting out milk and cookies for Colby and Santa Claus.

Audrey didn’t believe people still did that. “She found out the hard way,” Dan said.

“One of the silver linings of this is, because I am home for Colby, I feed him every day, I give him his bath, I wash his clothes, I do his homework with him, I read to him,” Dan said. “We have a really close relationship.”

Dan has a simple message for the HD community, one he will put into practice on December 19: “It’s easy to withdraw and just go into a shell, but it’s never too late to do some of the things that you’ve always done.”

(The winter concert, which will take place in the Poway High School gymnasium, starts at 7. The event is open to the public. Admission is $5. The band directors recommend arriving early to obtain seating. The school is located at 15500 Espola Road.)
Posted by Gene Veritas at 8:52 PM