The Longest Journey – a new feature-length documentary film about Huntington’s disease – portrays the undaunted Shaffer family in an epic battle.

In June 2015, for the fourth time in ten years, Renato Shaffer of San Diego led a team of four men in the Race Across America (RAAM), a non-stop bicycle race from the pier in Oceanside, CA, to the boardwalk in Annapolis, MD. (In 2008, Renato also led an HD team in the Race Across the West.)

Their goal: to raise awareness about HD and support the effort to save Renato’s 48-year-old wife Sharon and 30,000 other Americans from the devastating, fatal neurological disorder and prevent it from striking the Shaffers’ two untested, at-risk daughters, Alexa, 25, and Taylor, 20.

Beautifully shot and directed by rising filmmaker Nathan Apffel and with inspirational sound design by Brandon Puda, The Longest Journey captures the heights and depths of the 3,200-mile race, which riders must complete in eight days or face disqualification.

However, as in the RAAM, the Shaffers haven’t given up the fight against HD. Along with Nathan, they want the film to help bring a cure. 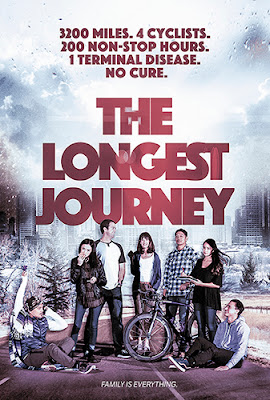 In contrast with most presentations of HD I’ve witnessed in the two decades since my mother’s diagnosis for the disorder, this often emotionally wrenching film left me, an HD gene carrier, feeling upbeat.

Seeing Sharon strive to overcome HD with the help of workouts and the RAAM team compete in an event that would challenge even the best-trained Olympic athletes, I felt newly motivated to exercise, a scientifically proven way to promote brain health.

I was also inspired to renew my commitment to advocacy.

Huntington’s is so cruel. It was refreshing to see someone offer a more hopeful interpretation.

Nathan, in his role as narrator, indicates this intention at the outset: “And you might be sitting there thinking, ‘Great, another movie about getting older, the age clock spinning faster, and the happiest times were when you were a child and hadn’t faced the music yet.’ Well, I’m hoping for all our sakes this movie’s a bit bigger than that.”

You can watch the film trailer by clicking here.

Nathan and producer LeeJ Razalan, a RAAM supporter and Shaffer family friend, held a private screening of the film for friends and family members in San Diego on May 19. About 200 people attended the screening, which also served as a fundraiser.

In an interview after the screening, Nathan said he expects to release the film in the next three to six months. His previous films and programs have appeared on Netflix, Bravo, Hulu, and ESPN, and he hopes to place this film with an online streaming site, aiming for ten million viewers.

Nathan, LeeJ, and the Shaffers want to educate as many people as possible about HD, and to raise funds for research.

The professional quality of The Longest Journey, its potentially wide viewership, and its positive outlook could make it a successful awareness-building vehicle. 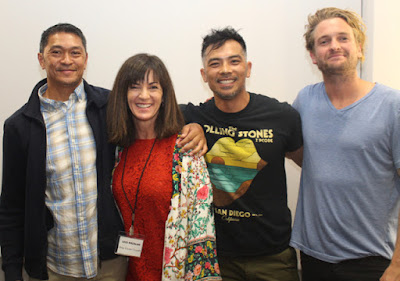 Fighting until she can’t fight

We learn in the 75-minute documentary that Renato married his high school sweetheart despite knowing her father had HD and that she might have inherited the genetic defect.

“She’s fighting a good fight,” he says. “At this stage, her father was already pretty far gone. She’s 48 now, and at least she can still speak, she can still communicate. She still has a little bit of freedom to do what she needs to do, as opposed to her father, who pretty much gave up.

“When he found out that he had it, he tried to kill himself a couple times. Not Sharon. She’s fighting until she can’t fight anymore.”

“It scares me that my whole family’s out there,” Sharon, her speech slurred by HD, says about the dangers of the long race, which originated in 1982. “There’s been deaths. There’s been accidents, so many accidents.”

Some teams “never come back the same,” she adds. Already by Colorado, 24 teams had to quit the 2015 race, unusually grueling because of extremely hot weather in the West, as shown in the film.

In past races, Sharon helped as a support team member on the road. In 2015 HD kept her home. She flew to Maryland with other family members on the last day.

Everybody in The Longest Journey is on a personal mission against HD, including Nathan, whose HD-affected brother-in-law has two young, at-risk children.

Nathan skillfully interweaves scenes from the Shaffer team’s spectacular athletic performance with interviews with Sharon, Renato, his teammates, and the Shaffer daughters and their boyfriends.

Also interviewed is Sharon’s physician, Jody Corey-Bloom, M.D., Ph.D., the director of the Huntington’s Disease Society of America (HDSA) Center for Excellence for Family Services and Research at the University of California, San Diego. Dr. Corey-Bloom explains the causes and symptoms of Huntington’s, providing a counterpoint to scenes in which we see Sharon speaking or fighting to overcome her condition.

“These are young people struck down at very productive points in their lives,” she adds. “There’s a valiant nature to people.[…] People are just so amazing in the way they handle it and deal with it and just try to keep going on.”

The desire to survive

“I think the hard thing for people to […] talk about is that it’s fatal,” Dr. Corey-Bloom comments.

However, The Longest Journey doesn’t dwell on death. On the contrary, it focuses on the RAAM, the Shaffers’ efforts to defeat HD, and their large network of supporters.

Sharon is living with her HD, and her family along with her, to the greatest extent possible.

Sharon and her family do CrossFit exercises in the Shaffer garage, converted into a gym.

Nathan projects Sharon’s desire to survive and her family’s hopes for a cure by focusing on their expressions during interviews and moments of the RAAM.

“I still feel: what an amazing lady,” says Dr. Corey-Bloom, recalling that Sharon before HD onset was articulate and employed by a drug company. “She is tough. I am sure there must be days when she sort of thinks, ‘Why am I even bothering?’ She’s out there. She campaigns for things. Renato makes that grow.

“These are two people who, at least in San Diego, everyone looks up to.” 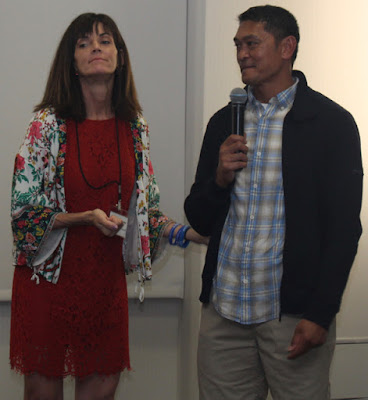 Nathan balances the many difficult challenges of RAAM and the struggle against HD with moments of humor and optimism.

“It’s only the end of the first day, and I didn’t know a body could sweat as much as I’ve sweat in the last few hours,” he observes. “Our vehicle’s already starting to smell like day-old beef stroganoff.”

Alexa good-naturedly refers to sister Taylor as a “neat freak” who bought “ten Glade air fresheners” for the two vans the riders eat and sleep in when off the road.

“Mother nature beat us up a little bit,” observes teammate Jason Tate, 45, about the winds and heat.

These and other moments made the audience laugh.

Through the interviews with the Shaffers and their friends, The Longest Journey offers much wisdom for the HD community.

The documentary exemplifies how families can unite – not split – when faced with the myriad challenges of HD. It also demonstrates how people like LeeJ, a friend with no blood connection to HD, provide crucial support for the cause.

As HD advocacy, The Longest Journey can potentially draw out of the “HD closet” those individuals and families needed as volunteers at events and in research studies and clinical trials.

Like The Lion’s Mouth Opens, Removing the Mask, and other films about HD, The Longest Journey offers a unique perspective.

After the screening, some attendees had tears in their eyes. However, the audience also applauded enthusiastically.

In talking with the audience, Nathan and LeeJ projected optimism.

I believe that optimism is indeed the film’s most important quality. I listened with great interest to Nathan and LeeJ’s recollections and their plans to attract viewers.

They recalled how the project was born after Nathan met Sharon, who was wearing a RAAM t-shirt, met at the 2015 HDSA-San Diego Hope Walk.

“Everything was serendipitous up to today,” said Nathan.

“The coolest part is that we made this one for 20,000 bucks,” he said. “Don’t get me wrong. There’s a lot of blood and sweat equity put into this.”

Noting that he shot the film in 4K (ultra high-definition) resolution/high dynamic range, the next generation TV technology, he added: “We’ve future-proofed this film for the next ten years.”

As of that evening, Nathan and LeeJ still needed $8,000 to reach their $20,000 basic budget. In an e-mail the next day, LeeJ announced that donations from the screening amounted to $9,000. 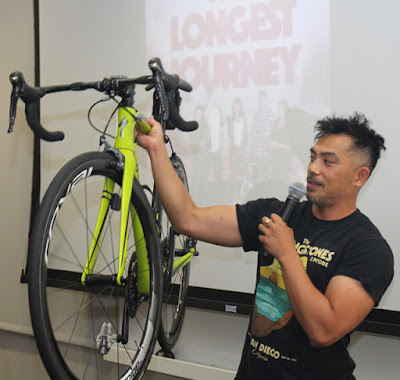 A raw and authentic story

They will now focus on marketing the film, including film festival submissions.

“This is my strongest [film], hands down,” Nathan told the audience. “I think it has the heart and the quality. I want to open or close Sundance or a really, really big festival.”

LeeJ calls The Longest Journey a “raw and authentic instrument to share the story of HD.” As a slogan to accompany the film, they’re considering “better together,” a reflection of its emphasis on family and community unity.

As Sharon states at the end of the film, in a message relevant for all HD families: “My advice would be to just continue to love yourself and your family.”

To donate to the Shaffers’ efforts to combat HD, click here. 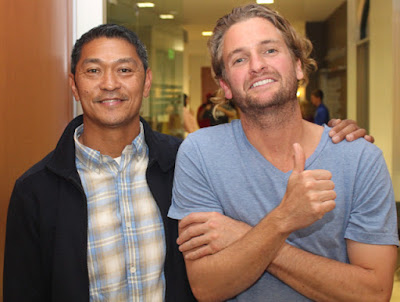 Encouragingly, they note at the bottom...

"We would like to thank everyone for their interest in the trial and for patients volunteering. The trial is going well and as of today there are no safety concerns."

The movie, The Longest Journey is preimering at the La Costa Film Festival on Oct 14 at 8:30. Huge red carpet event afterwards to the Omni Resort. Bring some friends and come enjoy this special event and teach others about this dreaded disease. www.the longestjourneymovie.com