Advocacy in the workplace: raising awareness about Huntington’s disease and brain health

In the fight to defeat Huntington’s disease and other brain disorders, advocacy in the workplace can attract new allies, boost awareness, and serve as a bridge to resources for those facing HD.

November 4 will mark five years since I went public about my gene-positive HD status in my essay “Racing Against the Genetic Clock,” published in The Chronicle of Higher Education.

Before that day in 2012, I lived in the “terrible and lonely HD closet,” with virtually nobody outside the HD community, family, and close friends aware of my family’s struggles. My name appeared nowhere in the local, tri-annual HD newsletter that I wrote and edited from 2001-2007. I began this blog in 2005 with a pseudonym, “Gene Veritas,” “the truth in my genes,” a reflection of my status as an HD-gene carrier.

Starting with the Chronicle article, I have integrated my advocacy into my work as a professor at the University of San Diego (USD).

In 2014, I started collaborating with Laura Rivard, Ph.D., an adjunct professor in the USD Department of Biology who teaches a course on bioethics. One of her students, Nazin Sedehi, recorded a video interview of me recalling my family’s experiences with genetic testing for two websites aimed at helping a general audience explore bioethical dilemmas.

I’ve spoken on HD to Dr. Rivard’s class three times. In February 2016, I gave a presentation titled “Huntington’s Disease and Bioethics: A Personal Case Study.” The talk focused on how advances in medicine and biotechnology have provided new tools for understanding both human biology and the situation of HD-affected individuals and families.

“These changes – these huge transformations that we’ve been going through scientifically and socially – have put people in unprecedented predicaments and thus, they are creating new bioethical challenges,” I stated. I reflected on how HD families faced decisions about predictive testing, family planning, abortion, suicide, euthanasia, and more.

You can watch my presentation in the video below. During the other class sessions, I provided commentary and answered questions after we watched the HBO documentary The Lion’s Mouth Opens, about young filmmaker-actress Marianna Palka’s decision to get tested for HD.

Huntington's Disease and Bioethics: A Personal Case Study from Gene Veritas on Vimeo.

My advocacy reached a milestone in May, when I traveled with my family to Rome to help represent the U.S. HD community at HDdennomore: Pope Francis’ Special Audience with the Huntington’s Disease Community in Solidarity with South America. I reported on the audience in several blog posts (click here to read one example).

My trip was made possible by USD’s College of Arts and Sciences, the Frances G. Harpst Center for Catholic Thought and Culture (CCTC), the International Center, and the Department of History. Back home, on September 28 I gave a talk exploring the social, scientific, and religious meaning of this extraordinary event. Some 60 students, faculty, and members of the San Diego HD community attended.

In one of the most emotional speeches I have given, I repeated the words of Francis’ address that most moved me:

For Jesus, disease is never an obstacle to encountering people, but rather, the contrary. He taught us that the human person is always precious, always endowed with a dignity that nothing and no one can erase, not even disease. Fragility is not an ill. And disease, which is an expression of fragility, cannot and must not make us forget that in the eyes of God our value is always priceless. Disease can also be an opportunity for encounter, for sharing, for solidarity. The sick people who encountered Jesus were restored above all by this awareness. They felt they were listened to, respected, loved. May none of you ever feel you are alone; may none of you feel you are a burden; may no one feel the need to run away. You are precious in the eyes of God; you are precious in the eyes of the Church!

I told the audience: “I saw HD turn my mother into a shadow of herself. I deeply fear losing my ability to speak and, especially, to write. Hearing that we HD people are ‘precious’ was a huge morale booster.”

I hope that my presentation raises awareness about HD in the U.S. Catholic community and beyond, and helps spur at-risk individuals and others to exit the HD closet and join the movement.

You can watch the speech in the video below, recorded and edited by Scott Lundergan of USD media services.

On October 17, another dimension of my workplace advocacy – the effort to raise awareness at the university about the dangers of tackle football – reached a crescendo. A resolution to ban football at USD, proposed by Daniel Sheehan, Ph.D., Nadav Goldschmied, Ph.D., and me, was voted on in the Academic Assembly of the College of Arts and Sciences.

USD football is a non-scholarship sport, so its profile is not as high as at some campuses, but it has fervent fans among students, alumni, and even faculty. At a USD Faculty Senate meeting last December, President James T. Harris III, D.Ed., reaffirmed his opposition to cancelling the program because, in his words, “no universities have closed their football program […]  because of concussion evidence yet.”

In the weeks leading up to the meeting, I remembered Pope Francis’ encouragement. I also frequently recalled my mother’s struggle with HD and my father, the “HD warrior” who cared for her for more than a decade.

Our resolution focused on the scientific evidence about football’s threat to the brain, especially the disease known as CTE (chronic traumatic encephalopathy), first seen in boxers in the 1920s and, over the past ten years, identified in the autopsies of an increasing number of National Football League, college, and high school players. We cited the publication in July of an article in the Journal of the American Medical Association documenting CTE in 110 of 111 autopsies of decease NFL players. (For the resolution’s rationale, please click here).

CTE produces symptoms similar to HD and other neurological diseases such as aggressiveness and cognitive loss.

However, many faculty members defended the football program because of virtues such as character-building. Surprisingly, this group included biologists and other natural science specialists.

After one of the most heated faculty debates I have witnessed in 25 years at USD, the motion lost, 50-26. However, 30 professors abstained – reflecting perhaps discomfort about offending their colleagues and/or indecision on the matter.

As a brain health advocate, I was disturbed by the vote. In an upcoming article, I will explore the USD debate in detail, in particular how it shows how scientific evidence is often ignored or manipulated in critical debates, and what this means for the HD and other disease communities.

Immediately after the assembly, I met with about 70 members of USD’s chapter of Phi Delta Epsilon, the co-ed pre-medical fraternity, to speak on HD and the papal audience. I urged them, as future members of the health professions, to be aware of CTE and to safeguard the well-being of football players. I also defended the continued inclusion in our health system of those with pre-existing conditions like me who in the past often hid their potential illnesses.

Fraternity president Nicholas DiChristofano pledged that the organization would support the HD community.

A student stands up for her family

As a result of my public stance, USD faculty members, students, and former students have supported the cause with generous donations and participation in the annual Team Hope Walk of the San Diego Chapter of the Huntington’s Disease Society of America (HDSA). Many read this blog. 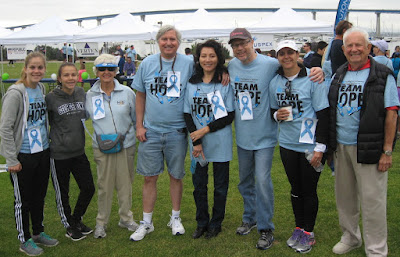 Through my advocacy, I can connect people to HDSA’s resources.

At day’s end on October 17, I met with Sydney Smyer, a 19-year-old USD biology major.

On October 3, Sydney had sent me the following email, quoted here with her permission:

My name is Sydney Smyer. I am a student here at USD and I attended your talk on Huntington’s disease and the explanation of His Holiness, Pope Francis’ involvement in the Huntington’s disease community. I was quite moved and enlightened, Dr. Serbin. Huntington’s disease runs in my family. My grandfather died from it as well as his father and three of his brothers. His remaining brother has recently been diagnosed with Huntington’s disease. Soon I will be tested, especially because my mother refuses to be tested and my uncle has been showing symptoms for some years now. I think your words would enlighten my family and bring them to the fullness and understanding that is comforting in so much uncertainty for our family members.

Sydney, whose family is Catholic, will share my #HDdennomore video with her family. They have an extremely rare disease known as HDL1, Huntington’s disease-like syndrome, a genetic disorder producing HD-like symptoms.

Sydney and I talked for almost an hour about our journeys with HD. Though I mentioned my own past fears about my HD status jeopardizing my career and insurance, Sydney was adamant about facing HDL1 openly and standing up for her family.

She accepted my invitation to the October 30 meeting of the HDSA-San Diego support group, featuring the highly popular annual HD research update by Jody Corey-Bloom, M.D., Ph.D., the director of the local HDSA Center of Excellence for Family Services and Research.

To me, there is no more important work in the HD community than the mutual assistance we provide at the support group.

When I exited the HD closet five years ago, I did not imagine that one day a USD student would join our group.

I am grateful to USD and my colleagues for their support as the HD community seeks a treatment for this incurable disorder.

As a professor, I have the privilege of melding my academic work with advocacy.

However, many of us in the HD community have unique skills and positions with the potential for building bridges to our employers and others we associate with on personal and professional levels. Doing so can reap many unexpected benefits.

Sydney's courage should inspire us all to step forward.
Posted by Gene Veritas at 9:00 PM 2 comments: