“Results from exploratory analyses of data from the study demonstrated correlations between reductions in mutant huntingtin (mHTT), the disease-causing protein, and improvements in clinical measures of Huntington's disease,” an Ionis press release stated about its drug IONIS-HTTRx.

Initiated in September 2015 and completed in December 2017, the trial tested the drug in 46 symptomatic volunteers at nine sites in Canada, Germany, and the United Kingdom.

Because of the very limited size, duration, and scope of the Phase 1/2a trial, the newly studied clinical signals have only statistical importance. They do not demonstrate whether an individual patient got better, or by how much a person did better on a particular test.

However, they provide hope for the HD community because they showed an association between reducing, or lowering, mHTT, and the improved scores. The new data will help pave the way for the planned Phase 3 trial to test efficacy.

“These important clinical results further demonstrate that targeting the reduction of the toxic mutant huntingtin protein with IONIS-HTTRx has the potential to be disease-modifying,” Frank Bennett, Ph.D., Ionis senior vice president of research and franchise leader for neurological programs, stated in the release.

Sarah Tabrizi, FRCP, Ph.D., of University College London, the lead investigator of the Phase 1/2a trial, also presented the new information on April 24 at the annual meeting of the American Academy of Neurology (AAN) in Los Angeles. Out of more than 3,000 submissions, the talk was one of four selected for the top-featured session at the meeting, which drew more than 12,000 professionals.

On March 1, at the 13th Annual HD Therapeutics Conference in Palm Springs, CA, Dr. Tabrizi revealed that the drop of 40-60 percent in mutant protein observed in the cerebral spinal fluid (CSF). Based on numerous animal studies done by Ionis, that corresponds to to a decrease of 55-85 percent in the cortex of the brain. The cortex is the most developed area of the brain and the source of thought and language, abilities severely hampered by HD. In the caudate – which helps control movement, another critical problem in HD – the corresponding decrease (based on animal data) ranged from 20-50 percent.

The press release further noted a significant correlation between huntingtin reduction and an improved score on the Composite Unified Huntington's Disease Rating Scale (cUHDRS), which measures decline in patients. 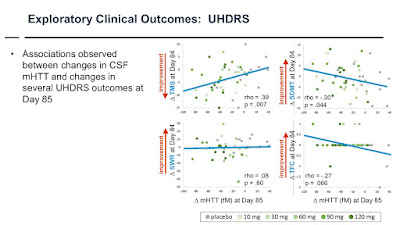 At the AAN meeting, Dr. Tabrizi emphasized that the three-month Phase 1/2a trial was not designed to measure a true clinical benefit from IONIS-HTTRx. It sought primarily to gauge safety and tolerability of the drug.

As explained by Ionis officials in an e-mail, post-hoc means that Ionis did not predefine the analyses in the clinical trial protocol. Such analyses cannot provide conclusive proof of a drug effect. These analyses are common in early-stage clinical trials, where drug companies look for interesting signals worthy of careful evaluation in later-stage trials.

The officials also pointed out that, in analyzing the data using the gold-standard technique for demonstrating effect - comparing clinical test results of drug-treated participants with those on placebo - no improvements were found. This was not a surprise, given the limited scope of a Phase 1/2a trial.

In fact, they added, the trial planners included the clinical tests primarily to monitor for unexpected worsening.

The Ionis officials described the relationship between mHTT-lowering and potential clinical benefit as "subtle."

They emphasized the need for larger and longer trials to demonstrate efficacy.


A 'hint of clinical benefits'

“The measurements were done during the trial, but these statistical analyses were not pre-specified, and so we say that they are post-hoc and exploratory,” Jody Corey-Bloom, M.D., Ph.D., the director of the Huntington’s Disease Society of America (HDSA) Center of Excellence for Family Services and Research (COE) in San Diego, explained in an e-mail.

Dr. Corey-Bloom described the correlations between the clinical measurements and the reduction in the huntingtin protein as “positive but weak. This is very welcome news and clearly in the right direction! We will obviously need larger and longer studies to really confirm a potential clinical benefit, though.”

Swiss pharmaceutical giant Roche, which now holds the license to the Ionis drug, has confirmed that it will take the unusual step of skipping a Phase 2 trial and going directly to Phase 3. Phases 2 and 3 measure a drug’s efficacy. Roche, which renamed the drug RG6042, does not yet have a timeline. (Click here to read more about Roche’s plans.)

"Though press releases and post-hoc analysis can be problematic, the reported improvement in clinical measures in this early clinical trial, if borne out by subsequent study, is a ‘wow’ for the HD community,” LaVonne Goodman, M.D., the founder of Huntington’s Disease Drug Works, commented in an e-mail. “So I look forward to seeing the full data set in a peer-reviewed article. If results from this first trial are borne out in the larger Phase 3 trial, this drug is a game changer for HD. And also great, if results are similar to the present trial, it might take less than the earlier predicted three years to show it.”

“It is quite exciting to see any hint of clinical benefits,” Martha Nance, M.D., the director of the Minneapolis COE, wrote via e-mail. “It is important to know that these clinical results are not definitive, but this report adds to the growing list of favorable results from this groundbreaking trial of gene silencing in HD. The HD community has every right to be excited about these results!”

For additional coverage of the Ionis news, click here and here.

For background on the development of clinical tests for HD, click here.

(This article was updated on April 27, 2018, to include additional comments on the clinical trial analyses by Ionis officials.)
Posted by Gene Veritas at 2:51 PM No comments:

Nora Guthrie: we’re all ‘hoping machines’ in the fight against Huntington’s disease

The cause to defeat Huntington’s disease came full circle at the recent HD Therapeutics Conference, where keynote speaker Nora Guthrie recalled the brave struggle against the disease by her father, iconic folk singer Woody Guthrie, and the groundbreaking advocacy of her mother Marjorie, the founder of the Huntington’s Disease Society of America (HDSA).

“We are the hopers and the changers,” said Nora, 68, quoting her father, to the audience of 350 scientists, drug company representatives, and family advocates gathered at the 13th annual meeting in Palm Springs, CA, in late February. “The note of hope is the only note that keeps us from falling to the bottom of the heap of evolution, because about all a human being is anyway is just a hoping machine.”

The conference was sponsored by CHDI Foundation, Inc., the nonprofit virtual biotech dedicated to developing HD treatments. Like a number of past keynoters, Nora preferred not to have her presentation recorded. She interweaved her father’s music – he wrote “This Land is Your Land” – with the family’s struggles against HD.

However, Nora agreed to an interview with me in which she reflected on the early days of HDSA – started in 1967, the year her father succumbed to HD, when she was 17 – and the progress towards treatments. 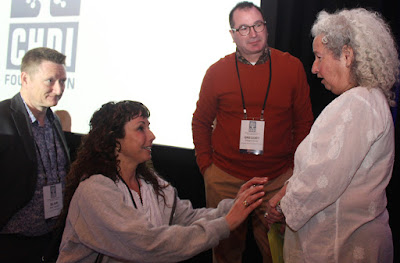 I was thrilled to meet Nora. Watching and interacting with her helped me connect with a giant of American history as well as with what she called the vast HD “tribe” that Marjorie had started.

Before our formal interview, in conversations with Nora, I also relived key moments in my personal journey with HD.

After her keynote, filled with emotion, I hugged Nora, telling her that my mother had died of HD.

Nora was at first befuddled by my pseudonym, “Gene Veritas.” I explained to her that it meant “the truth in my genes,” a reflection of my condition as an HD gene carrier.

During one dinner, I told how, in the late 1990s, my efforts to get background on the disease and the cause led me to study Woody’s life and watch the 1976 film Bound for Glory, based on his autobiography and portraying his early phase as a drifting folk singer. Nora recalled her personal impressions while on the set.

“I feel a spiritual connection with you and your family,” I told Nora at the outset of our interview. “Thank you for being here, and thank you for speaking out for us, just as your father spoke out for so many people.”

Impressed with the research progress

As I proceeded to my first question, Nora interjected: “Not just speak out, but speak up.”

In that comment, and many of her other responses during the interview, Nora quoted her father or echoed his singular eloquence with her own plays on words and unique phrasing.

I asked Nora what it was like to speak to the scientists.

“For me, it was like a sci-fi movie, because coming from my early years with Huntington’s with my father in the late 1940s and early fifties, when there wasn’t one person you could talk to, not one doctor that knew anything about Huntington’s, not one social worker to help you get through it, not one support group,” she said. “Our family was kind of inventing how to deal with Huntington’s in those days. There were no pamphlets. There were no guidelines. So, we were going day to day, day by day, inventing – trying to be creative, trying to be helpful, trying to figure out even what the symptoms were.”

Today, Nora said, just at events like the CHDI conference, hundreds of “young, energetic, and smart” people are focused on developing treatments – all descendants of Marjorie, the “Eve” of the HD movement. To Nora, they represent hope for the community.

Devoted to preserving her father’s legacy, Nora still seeks to combine music with HD advocacy. She described the concert she organized last summer in Berlin, gathering musicians and HD families and organizations.

“For me, the music and the art and the sciences are one group,” she said.

You can watch the interview in the video below.

A cure: when, not if

Like all children of an HD-afflicted parent, Nora was born with a 50-50 chance of having inherited the genetic defect. In her talk, she did not broach the issue of genetic testing. We also did not discuss it in our interview. For many in the HD community, that is a private matter.

At age 68, Nora has passed the age of typical onset. She looks to be in excellent health. According to Woody biographer Ed Cray, Nora declined testing. So did her famous brother Arlo, a musician born three years earlier. Their brother Joady tested negative for HD in the early 2000s. (Two half-siblings died of HD.)

I wished Nora and her extended family the best of health.

Finally, I wanted to know what her parents would say about the advances in HD science, if they were alive today.

"I think the most impressive thing for them is an affirmation of their belief in humanity," Nora said. "That people are interested. That people do care. That a cure is down the road. It's just a question of when, not if."
Posted by Gene Veritas at 12:07 AM No comments: