(I dedicate this article to the dozens of people who joined or supported the “Serbin Family Team” on April 14 in the 2013 Team Hope Walk-San Diego of the Huntington’s Disease Society of America, HDSA.)

Lately, I’ve been feeling great hope – even as my genetic clock ticks ominously – that researchers will find an effective treatment for Huntington’s disease and save me from following in the footsteps of my mother, who struggled against this so-called “devil of all diseases” for nearly 20 years before succumbing at age 68 in 2006.

Because the underlying causes of HD are untreatable, I’ve rarely permitted myself to have all-out hope during my 15 years of advocacy and personal fight to avoid the inevitable symptoms. I’ve braced myself for the impact of onset, even as I keep advocating for the cause on full throttle until our community, together with the scientists working overtime for effective treatments, achieves victory.

Hope is a precious commodity to be savored when breakthroughs occur. I’ve saved a couple bottles of Hangtime Pinot Noir, the wine served at the Parker Palm Springs hotel in 2011 at a reception after my first major speech on HD, delivered at the Sixth Annual HD Therapeutics Conference, sponsored by the CHDI Foundation, Inc., in February 2011. I’m keeping at least one to celebrate on the day a treatment is announced.

Big news, a sense of relief – tempered by reality

In recent weeks, the science news and advocacy milestones have left me feeling particularly buoyant.

On April 2, I was thrilled with President Barack Obama’s announcement of the BRAIN (Brain Research through Advancing Innovative Neurotechnologies) initiative, which will spend hundreds of millions of dollars over the next decade to map the mysterious circuitry of the brain. Although HD researchers hope to find treatments before the potential benefits of BRAIN become available in a decade or more, the announcement of the project finally brings brain health and research to a long-overdue prominence in American politics.

The very next day, HDSA held a symposium at the U.S. Senate to mark the 20th anniversary of the discovery of the HD gene. Dr. Francis Collins, the director of the National Institutes of Health and one of the scientists who helped find the gene, keynoted the meeting, which included presentations by key HD researchers about the prospects for treatments. As I watched the live streaming video of the event, I could feel the sweep of history as I reflected on the scientists’ words and my family’s odyssey with HD, beginning with my mother’s genetic test in 1995 and my own test in 1999.

Just a few days later, on April 8, the Swiss pharmaceutical giant Roche and Carlsbad, CA-based Isis Pharmaceuticals, Inc., announced a multi-million-dollar partnership to bring Isis’s potentially revolutionary HD gene-therapy drug into clinical trials, with a projected start date of the first half of 2014. I have followed the Isis project closely since 2008, visiting the company’s labs, interviewing its scientists, writing detailed articles about the research, and, in speeches to the HD community, citing the project as a great sign of hope.

As I prepared an article on this latest phase of the project, I felt a profound sense of comfort and elation as I pondered how the deal with Roche should accelerate the research, increase the potential for effective results for symptomatic HD people, and, for the very first time, allow scientists to envision ways of preventing presymptomatic people like me from ever developing the disease!

I let out a long sigh of relief – as I do again now in writing these words – and imagined a future without HD for me and the tens of thousands of families around the world devastated by the disorder.

However, since then I’ve tempered my enthusiasm with reality. Although scientists express genuine optimism about developing treatments, only one in ten clinical trials leads to a drug.

As I race against my genetic clock and past my mother’s age of onset, a treatment may not arrive in time to prevent my symptoms.

Nevertheless, the great feeling of hope lingers and brightens my days!

In the midst of these events, my wife, my daughter, and I sought fundraisers and walkers for the April 14 Team Hope Walk.

In the wake of my definitive exit from the “HD closet” (in an article in The Chronicle of Higher Education and an interview on the website of my employer, the University of San Diego), nearly 70  friends, colleagues, and other supporters donated more than $16,000 to the “Serbin Family Team” – more than three times our goal. (Overall, local HDSA board members expected the event to net more than $40,000 for the organization.)

Twelve volunteers joined us in the 5K walk at Tidewater Park in Coronado, CA, to help raise awareness about HD. I felt enormous pride in my family, my friends and supporters, and the HD cause.

I was moved most by donations from individuals and families themselves hit with serious illnesses, all of them with at least a partial genetic basis: breast cancer, colon cancer, young onset Parkinson’s disease, fragile X syndrome, and multiple sclerosis.

My family and I learned of these other families’ struggles, including, in one case, a harrowing decision about genetic testing.

I was deeply moved by this outpouring of generosity and love.

For me, it was also a lesson in humility, a reminder that so many others suffer from disease, an opportunity to become more sensitive to others’ needs, including the need to support other causes.

Above all, the immense display of support for the “Serbin Family Team” stirred in me the same feeling of hope that I experienced in contemplating the Roche-Isis project.

Sadly, just two days before the walk, I learned of the death of a fellow HD support group member, a 20-year Navy veteran and airline pilot whose career and life were cut short by Huntington’s disease. He was just 65.

“Damned disease finally won,” his mournful wife wrote me in an e-mail.

As on countless occasions in my battle against HD, I had to overcome a sense of hopelessness, which threatened to overpower all of the good feelings about the research and the Hope Walk.

At the Hope event, I hugged our departed friend’s wife. Everybody held a moment of silence for him.

Before setting out on the walk, I guided one of our team members, a ninth-grader with a passion for science and technology, over to the area where employees from walk co-sponsor Vertex Pharmaceuticals were congregating.

I introduced him to Paul Negulescu, the Vertex vice president of research, and mentioned that he aimed to become a researcher.

Paul invited him to visit the Vertex facility and, in the future, perhaps contribute as an intern.

“I want to cure diseases,” the budding scientist told me during the walk.

Our cause had lost a warrior, but the Hope Walk had helped prepare another to do battle.

(Below see other photos from the Hope Walk.) 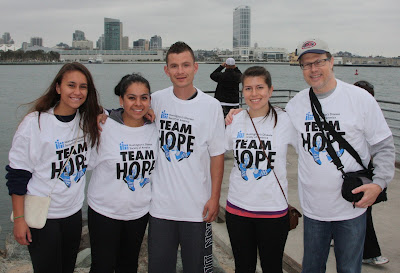 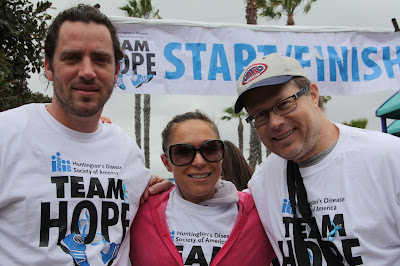 "Team Vertex" and friends with San Diego-Coronado Bridge in background

I lost my dad two weeks ago today to this horrible, wretched, and cruel beast. Like you, I dare not lift my hopes too high for a viable treatment or cure.

Without hope, we are nothing. Keep hope alive. Thanks for sharing!