A time for hope: HDSA’s 50th anniversary, a record-setting gala, and the impending release of highly anticipated clinical trial results

This year, Pope Francis’ historic “Hidden No More” audience with the Huntington’s disease community has understandably overshadowed another milestone in the HD cause: the 50th anniversary of the Huntington’s Disease Society of America (HDSA).

However, on November 4 the spirit of HDSA, embodied in founder Marjorie Guthrie’s goal of a cure, helped fuel new hopes: the San Diego chapter’s sixteenth gala, recalling HDSA’s start in 1967 and honoring celebrated ESPN sportscaster Chris Berman, raised more than $250,000, a national record for chapters. It was the society’s most successful fundraising event of the last decade.

Also, for the first time, the gala attendees included top scientists from Ionis Pharmaceuticals, Inc., which, by January 2018, expects to release results of its highly anticipated Phase 1 gene-silencing clinical trial.

It was also the first time an HDSA chairman of the board attended: Chair Arik Johnson, Psy.D., the staff psychologist at the HDSA Center of Excellence at the University of California, Los Angeles, joined HDSA CEO Louise Vetter at the event.

It was a striking convergence of history, people, and research progress.

The gala was organized by HDSA-San Diego and the chapter’s former president, Bill Johnston. Johnston left a 38-year career as PR director for the San Diego Chargers football team, which moved to Los Angeles, to keep his HD-stricken wife Ramona at Edgemoor Hospital, an award-winning care facility in nearby Santee. Johnston now works as special advisor to Ron Fowler, the executive chairman and co-owner of the San Diego Padres baseball team and a long-time supporter of HDSA-San Diego.

“It was so rewarding to see the extended HD community having a wonderful evening and enjoying a series of heartfelt and humorous stories about Marjorie Guthrie, the Johnstons and the 2017 Guthrie Awardee, Chris Berman,” HDSA-San Diego President Beth Hoffman, Ph.D., said after the event. “Generosity was in the air, and we’re so grateful to everyone who dug deep to support HD families and to find a cure for HD.” 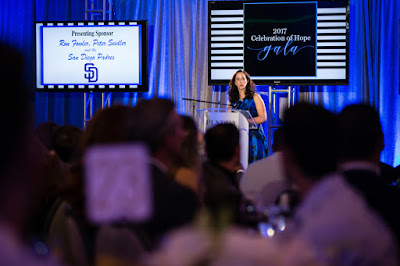 Marjorie Guthrie’s vision for a cure

In her speech, Vetter described HD’s devastating symptoms, its impact on families, and the story of Guthrie’s founding of what would become HDSA after her husband, folk singer and social activist Woody Guthrie, died of HD in 1967. Guthrie began in a time before the Internet: she placed a classified ad in The New York Times seeking contact with other families affected by a disease mainly unknown, even to New York’s medical community.

“In three months, she had 35 families affected by Huntington’s disease that were meeting around her kitchen table and dreaming about developing a cure for HD,” Vetter said. “That’s how the Huntington’s Disease Society of America was born. And at 50 years, we mark the amazing vision that this woman had to really set a course for a community to come together and provide support for one another.”

Today HDSA provides education about HD, supports research, and advocates for better care for HD-affected individuals, Vetter added. It now has more than 40 Centers of Excellence (COE), which provide a variety of family services and involve the community in research studies and clinical trials.

In a pre-gala interview, board chair Johnson outlined some of the ways in which HDSA and COEs are assisting affected individuals and families with HD’s daunting psychological and behavioral symptoms. “We have a Telehealth program for people to call in and talk to a trained social worker or psychologist who has been educated in Huntington’s disease,” he said.

You can watch Vetter’s speech in the video below. Click here to watch my interview with Dr. Johnson.

At 50, HDSA striving for founder Marjorie Guthrie's goal of a cure from Gene Veritas on Vimeo.

‘A heart for people that need a voice’

After the audience watched an ESPN report on the Johnston family’s struggles and leadership of the cause, Johnston received a standing ovation as he approached the podium. Johnston’s daughter Hayley, who has not tested for the inheritable genetic defect that causes HD, appears in the video.

“If my wife were here, then it would make sense that you’re standing up,” Johnston told the audience, explaining that Ramona’s advanced symptoms caused her to miss the event for the first time. “My wife is my hero. I appreciate everybody being here tonight. Hayley said it in that video about this disease: people don’t really know what it is until you see it. I wish Ramona could be here. She would be here, if she could.”

Johnston noted that Berman and Fowler have been the “biggest” and “most consistent” contributors to his fundraising efforts. Fowler was honored at the 2013 San Diego gala.

Johnston recalled his friendship with Berman, begun in the 1980s when he started at the Chargers and Berman was at ESPN. Starting in the 1990s, around 6 a.m. every Sunday during football season, Johnston updated Berman on Chargers news for the sportscaster’s reports.

“We just talked football,” Johnston said. “And then when Ramona got diagnosed, I could not have that conversation without him asking first how was Ramona, how are the kids. Every year, at the end of the year, a check would show up in the mail, unannounced, unrequested, a donation. Our honoree has been a huge friend of our organization and the effort to find a cure, find a treatment, for this disease.”

Berman does more than write checks, Johnston added. Berman, he said, “shows to me a commitment and a caring and a heart for people that need a voice, and that’s what this disease needs. It needs people to talk about it, to learn about it. And that’s why we’re doing what we’re doing here tonight.” 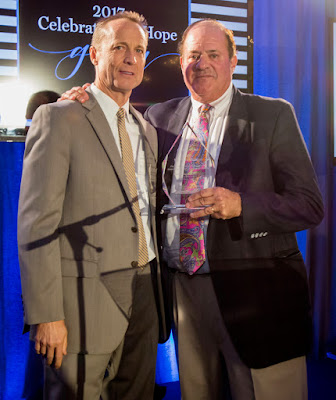 ‘Advancing the ball’ for HDSA

“Billy is as loyal as they come,” he said, referring to Johnston’s decision to stay in San Diego. “Is there anything more admirable than that?”

Berman recalled that, after his wife’s death in a car accident in May, Johnston flew to the East Coast for the funeral. Johnston and other “true friends” have helped him overcome his grief, he said.

“You realize that, when times are the toughest, your friends and people bonding together is the way we all can advance the ball, if you will, to use a football term. They’ve helped me do that. And that’s where we are with Bill, and Hayley, who’s here tonight, and the Johnston family and countless other families just like this family.”

You can watch Johnston’s and Berman’s remarks in the video below.

Earlier, I watched as Ionis scientists bid on silent auction items using a mobile phone app. I greeted several of the Ionis officials, including Frank Bennett, the senior vice president for research, who attended the gala for the first time.

Dr. Bennett has overseen the ten-year development of IONIS-HTTRx, a gene-silencing drug that aims to alleviate HD symptoms by reducing production of the huntingtin protein in brain cells. The drug entered a Phase 1 clinical trial in September 2015 in Canada, England, and Germany. The company expects results to become available in the next two months.

Recalling a metaphor used in formal interviews about IONIS-HTTRx, Dr. Bennett referred to the project as a “cake in the oven.” The team is awaiting the opening of the oven to learn the results.

If successful, IONIS-HTTRx would mark the first effective treatment – though not a cure – for a brain disease. 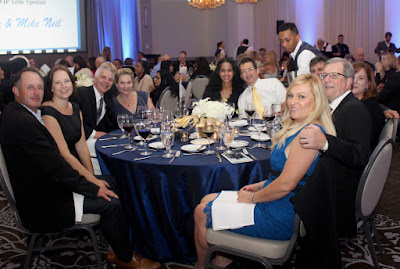 Jody Corey-Bloom, M.D., Ph.D., the director of the COE at the University of California, San Diego, also attended with her husband Floyd Bloom, M.D., staff, and members of the HD community. So did representatives of Teva Pharmaceutical Industries, a major sponsor of HDSA galas and the manufacturer of AUSTEDO, a recently approved drug – developed in San Diego – that alleviates HD’s involuntary movements but does not slow progression of the disease.

On October 30, Dr. Corey-Bloom gave her annual Huntington’s disease research update at the HDSA-San Diego support group. Most of her talk focused on gene silencing and the Ionis trial.

She also spoke on her groundbreaking research on the presence of huntingtin protein in saliva – a potential marker of both disease onset and progression and also of medications’ impact. Saliva is easier and far safer to collect than blood and cerebrospinal fluid, which are also under study for markers. (Click here for a scientific presentation on this topic.)

“This is an incredibly exciting time for HD,” Dr. Corey-Bloom concluded. “I think really we’re on the edge of really discovering something here, and being able to treat this disease. If we can’t cure it, we can slow it down.” 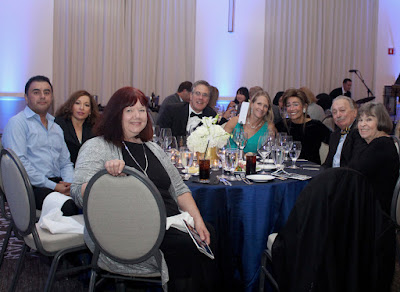 A true celebration of hope

I’ve attended every San Diego gala but one. As always, it was simultaneously exhilarating and emotionally draining.

I was thrilled to see the especially large group of scientists, researchers, and clinical workers. I was able to introduce several of these mutual contacts to each other. I also enjoyed listening to Berman talk about his career as a broadcaster, one of the highlights of the evening (click here to watch an excerpt).

When I greeted Johnston, I told him that my recent, annual neurological checkup showed no signs of HD. I’m 57; my HD-stricken mother’s symptoms started in her late 40s.

However, seeing “HD brothers and sisters” like Tim Schroeder and Sharon Shaffer, both deeply affected by the disease, reminded me of my likely future unless a treatment is found soon.

Yet this gala lived up to its name: a celebration of hope. My heart jumped as I realized it would set a fundraising record.

I’m hoping it will jump even more when the Ionis Phase 1 results come out. 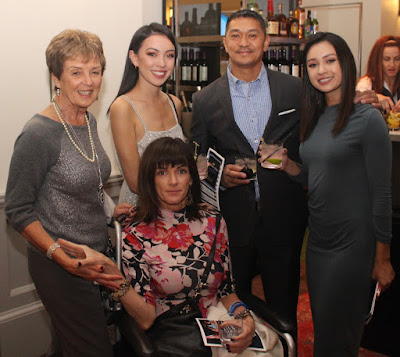 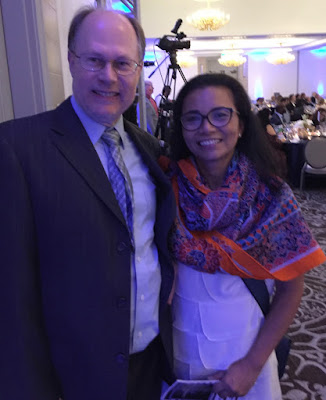 (Scroll down for other photo highlights.) 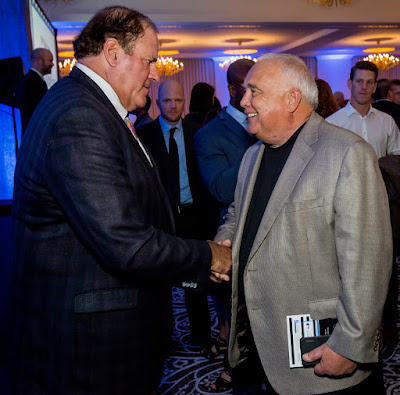 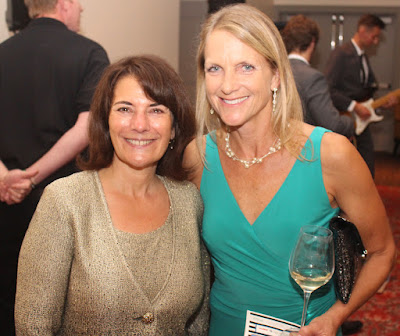 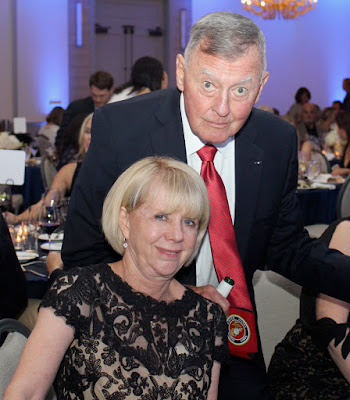 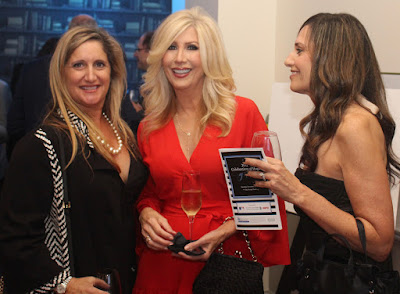 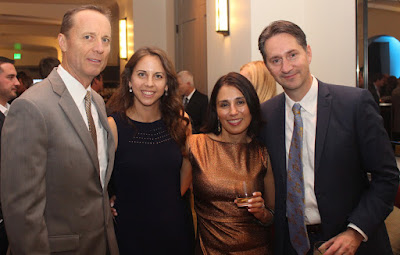 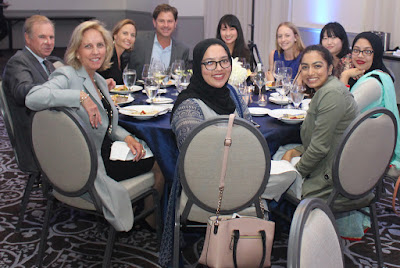 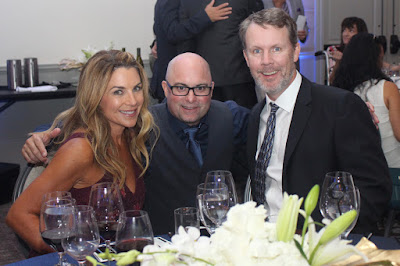 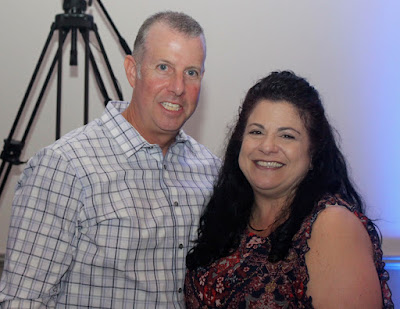 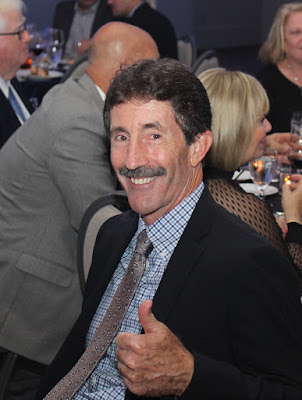 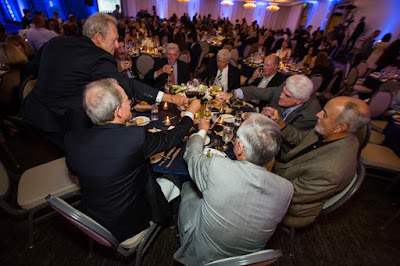