‘Inequality is unsustainable’: a view of the quest for Huntington’s disease treatments from the Global South

(I dedicate this article to the worldwide HD community as we mark Huntington’s Disease Awareness Month in many countries around the planet.)

Both the COVID-19 pandemic and the quest for treatments for rare and genetic diseases have laid bare deep social divisions across the world, and it behooves the scientific establishment to help resolve this ethical dilemma, says a leading Brazilian Huntington’s disease clinician.

“The world should not be divided between those who have money and those who don’t,” Mônica Santoro Haddad, M.D., a neurologist with 33 years’ practice at the Universidade de São Paulo (USP) School of Medicine, told me in an April 30 Zoom interview about the 16th Annual HD Therapeutics Conference. “The pandemic has already shown us that. This inequality is unsustainable.”

Dr. Haddad has assisted HD patients from 600 families at the USP neurology clinic and her private office. A participant in the 2013 Therapeutics Conference in Venice, Italy, and 2014 meeting in Palm Springs, CA, she watched all of this year’s three-day virtual event (April 27-29) online. The conferences are sponsored by CHDI Foundation, Inc.

“What we’re witnessing in Brazil [regarding the pandemic] is immoral – Brazil in relationship to the world and Brazil in general,” Dr. Haddad observed, speaking in her native Portuguese. “Two categories of people have been created: those with the vaccine, those without the vaccine.”

Sadly, Brazil ranks second in the world behind the United States with more than 428,000 COVID-19 deaths.

As a history professor, I have dedicated much of my career to the study of Brazil, a country that I consider my second  home; my wife is Brazilian, and her extended family is there. Along the way, I have witnessed the development of the Associação Brasil Huntington and built ties to its leaders.

A major country of the Global South – the world’s developing countries – Brazil has an estimated 20,000-plus afflicted individuals and an active HD movement. An enthusiastic group of some 30 Brazilians took part in #HDdennomore, Pope Francis’ special audience with the HD in May 2017. Francis, a native of Argentina, is also the first pontiff from the Global South.

However, although Brazil’s medical system has gained international recognition for past vaccine campaigns and its model fight against AIDS, during the pandemic the country has lacked hospital beds, cemetery plots, and basic supplies. Like Donald Trump, Brazilian President Jair Bolsonaro denied the crisis, downplayed the dangers, and actively denounced such measures as mask-wearing.

In addition, Brazil has fallen victim to the international inequities in the rollout of vaccines. Both U.S. President Joe Biden and former Brazilian president Luiz Inácio Lula da Silva – a likely candidate in the 2022 presidential election – have backed waiving COVID-19 vaccine patents to assure global access.

Brazil’s deep internal disparities have led to inadequate vaccine distribution to the poor and marginalized.

Recognizing similar, longstanding neglect in other South American countries, the humanitarian organization Factor-H has continued to assist abandoned HD families during the crisis.

Echoing her concerns about COVID-19, Dr. Haddad affirmed the need for a “change in the paradigm” regarding rare and genetic diseases like Huntington’s.

As in the U.S. and elsewhere, fear and denial frequently underlie Brazilians’ decisions to avoid genetic testing and facing the terrible medical and social challenges posed by the disease. Many Brazilians have “prejudice against disease” in general, Dr. Haddad told me in a 2013 interview.

However, the trend against testing might be shifting for the younger generations, and could also change among older groups when the overall outlook for treatments has improved, Dr. Haddad wrote in a May 14 WhatsApp message. Clinical trials seeking presymptomatic HD gene carriers will require testing, she added.

Like medical professionals in many countries, Dr. Haddad believes genetic testing is a personal decision, with the procedure governed by established protocol and with professional medical and psychological support.

As of April 2021, the Brazilian government has required all private health plans and insurance to cover genetic testing. This represented a “small advance,” Dr. Haddad asserted in our Zoom interview, because health advocates want to see the country’s free public health service also provide that benefit.

For Dr. Haddad, for HD to be defeated, inequality must diminish.

“The question is: is it ethical to diagnose someone with one of those diseases and not have a treatment available?” Dr. Haddad said. “This is a question that I discuss with my patients and with my colleagues.”

She added: “It is certainly not ethical to have a treatment that not everybody has access to.”

The HD Therapeutics Conference left her with her “hope battery recharged” and confident that a treatment is possible, Dr. Haddad said.

At the close of the conference, Dr. Haddad was inspired by the presentation by featured speaker Aled Edwards, Ph.D., who in 2004 founded the Structural Genomix Consortium (SGC), which practices and advocates for open sharing of scientific information, particularly as it applies to protein science, chemical biology, and drug discovery.

Dr. Edwards, the SGC CEO and a scientist based at the University of Toronto, spoke on “HD drug discovery in the public domain – a model for CHDI.” A breath of “fresh air,” Dr. Edwards’ talk pointed the way to reducing inequality, Dr. Haddad told me.

“What we would also like to do is develop a drug discovery ecosystem that prioritizes affordability and global access, and, of course, to do this in collaboration with industry,” Dr. Edwards stated. “Now this might sound naïve, but I’d like to emphasize there’s quite a bit of drug discovery experience in the SGC and in our network.”

Dr. Edwards presented examples of researchers who have followed the open science model – including 16 “HD open science programs” that share science “as they go,” with some even blogging about their findings. He highlighted the work of Rachel Harding, Ph.D., an SGC researcher and postdoctoral fellow at the University of Toronto who achieved the “very challenging” task of purifying the huntingtin protein to a “resolution that is practically useful” to other scientists.

Dr. Harding has widely shared both the protein and reagents (compounds that facilitate chemical reactions) that enable the making of the protein, ultimately aiming to inform the discovery of potential HD drugs, in particular so-called small-molecule drugs, Dr. Edwards explained.

Discussed at the Therapeutics Conference, these drugs become distributed very evenly across the whole body, including the brain, whereas several drugs in other current or recently completed clinical trials need to be injected directly into the brain or via spinal tap.

“This is a really fantastic contribution to the public good that these folks have made,” Dr. Edwards said of Dr. Harding’s team. 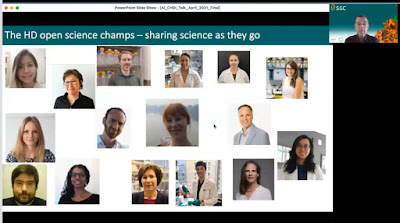 Dr. Edwards underscored a key point: despite spending $300 billion globally each year on research and development and producing many hugely successful drugs, the biomedical field is highly inefficient. “We need to do better as a society,” he asserted.

“For many diseases – Huntington’s, Parkinson’s, Alzheimer’s – we don’t even know the molecular mechanism of the disease, let alone how to design a therapeutic strategy,” Dr. Edwards said, adding that a system in which the “first past the post gets the money” in designing drugs has required “the pricing of medicines at levels that are unaffordable for most people on the planet.”

Dr. Edwards displayed data demonstrating how globally most research focuses on the familiar rather than explore new, potentially crucial areas of biology. Similarly, in industry, companies pursue drugs in parallel rather than collaborate, wasting valuable resources, he added.

SGC is working against the grain, trying to create the way for a new scientific culture. The SGC never files for patents “as a core principle,” Dr. Edwards explained. “All of the work we do goes into the public domain, including the reagents that we make.”

If labs and companies openly shared data before doing the final crucial test on a potential drug in a Phase 3 trial, the field could not only save money, but test multiple drugs at the same time, he said.

Rather than rely on patents, the system should take advantage of federal laws that give companies protection from competition for a fixed period, generally five to twelve years, Dr. Edwards affirmed. The law provides even longer periods for orphan and pediatric drugs.

“There is no law of physics that says industry has to invent a drug,” Dr. Edwards said. “That’s the social system that we’ve put in place. Let’s imagine a different system.”

To “walk the walk about open drug discovery,” SGC established the Agora Open Science Trust, a registered charity in Canada modeled on Newman’s Own Foundation, which funnels profits from food products with the picture of the late Academy-Award-Winning actor into philanthropy.

Dr. Edwards described its goal: “To support open science and the public good, and price new medicines to ensure global access. Whether you’re a rich American or live in Thailand, you’re going to get the medicine at a price you can afford.”

In its first project, Agora has focused on children’s cancers. As of yet the trust has not announced a plan for an HD drug program, although Dr. Edwards and the above-mentioned HD open science researchers have an abiding interest in finding treatments.

Indeed, regarding those treatments, Dr. Edwards concluded that “if we do it as a collective, we’ll get further faster.” 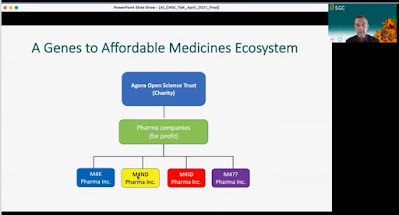 Knowledge belongs to the world

If Dr. Edwards and SGC achieve their goals, they will have a place in history, Dr. Haddad observed. The emphasis on sharing data will “democratize” knowledge, she added.

“It’s obvious that a company does things to earn money,” Dr. Haddad continued. She noted, however, that Dr. Edwards is asking scientists and others to put their vanity aside to help the suffering.

Brazil has not yet hosted, and may not host in the future, any sites for the major HD clinical trials, Dr. Haddad pointed out. She noted that the local HD community attempted to bring to Brazil the historic Phase 3 gene silencing clinical trial by Roche, which reported the unfavorable results at the HD Therapeutics Conference. In South America, Roche ran the trial in Argentina and Chile.

“We did the paperwork to try to include a Brazilian research center, and because of questions raised by an ethics committee and political and legal issues, we were unsuccessful,” Dr. Haddad explained. “Brazil did not permit genetic material [from the clinical trial] to be sent out of the country.”

For now, Dr. Haddad said, Brazilians can at least look forward to the possibility of their government’s authorization of the drug Austedo, approved by the U.S. Food and Drug Administration in 2017 for chorea, the involuntary movements that occur in many HD-affected individuals.

At this time, Brazil’s lack of participation in clinical trials of drugs that aim to slow or stop the disease is “not important,” Dr. Haddad concluded. Echoing Dr. Edwards – and the hope of thousands of Brazilian HD families anxiously awaiting the arrival of effective treatments but fearful that the country might not be able to afford them – she added: “The knowledge obtained belongs to the world.”